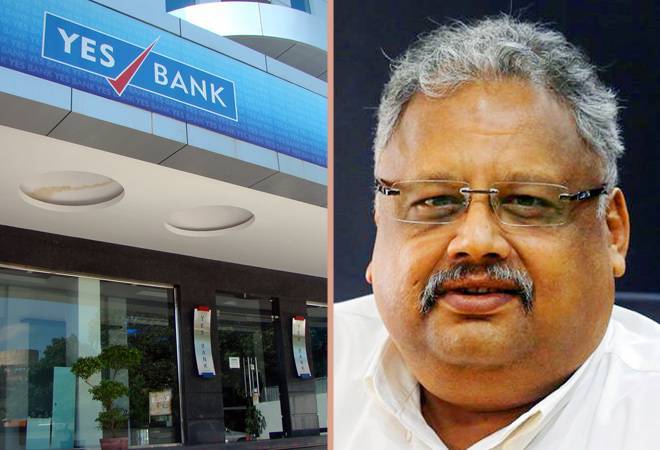 Ace investor Rakesh Jhunjhunwala is known for surprising analysts and investors by placing huge bets on beaten-down stocks and booking profits with them in the long run. While big bets such as Titan Company, SpiceJet, Lupin, Crisil and Escorts have reaped handsome gains, returns from JP Associates and Dewan Housing have not been encouraging of late. On November 4, Jhunjhunwala, often referred as Warren Buffet of India, bought nearly 1.3 crore shares of YES Bank for around Rs 87 crore through open market transactions.

Jhunjhunwala bought YES Bank shares at an average price of Rs 67.10, valuing the transaction at Rs 86.89 crore, bulk deal data showed. His stake (0.5%) in YES Bank forms a minuscule portion of his portfolio which stands at approximately Rs 18,000 crore.

The purchase by Jhunjhunwala comes at a time when YES Bank finds itself on a sticky wicket in terms of its financial position.

Even as big investors do not always reveal the reasons behind their investments, we try to decode what's got the Big Bull interested in YES Bank stock. There are two possible scenarios.

According to buzz on Dalal Street, Jhunjhunwala bought YES Bank share to offset his position in the Futures and Options market. However, this could not be verified.

The second one is Jhunjhunwala has been keenly watching the performance of the private lender and is convinced about the bank's improving financial position.

On July 17 this year, the lender announced its Q1 earnings which were below expectations. YES Bank reported a sharp decline of 91 per cent in its net profit at Rs 113.80 crore for the first quarter ended June 30, 2019, dented by one-off impact from mark-to-market (MTM) provisions of Rs 1,109 crore. It had posted a net profit of Rs Rs 1,260 crore in the same quarter last year. YES Bank's share price stood at Rs 98.45 on BSE that day.

After five days, the lender said its representatives met Rare Enterprises on July 22. Q1 earnings of the lender and initiatives taken by new CEO Ravneet Gill to clean books of the bank could have been on the agenda of the meeting. Rare Enterprises is a PE firm headed by Rakesh Jhunjhunwala.

On November 1 (Friday), the lender reported its second-biggest loss in Q2 since listing in May 2005. YES Bank reported a net loss of Rs 600 crore for the second quarter ended September 30, 2019 on November 1, impacted by one-time deferred tax adjustment of Rs 709 crore due to change in corporate tax rate regime. The bank had posted its biggest loss of Rs 1,506.60 crore in March quarter this year.

Excluding the one-time tax impact, adjusted profit after tax stood at Rs 109 crore, the bank said. It reported a net profit of Rs 964.70 crore in the same quarter last year.

In positive management commentary, the bank said, "This was a 'quarter of consolidation' in which the bank has demonstrated strong resilience in revenues and asset quality. We believe that earnings trajectory should strengthen significantly from here on."

The bank received a binding offer from a global investor for an investment of US$ 1.2 billion subject to necessary approvals including regulatory approvals. It also received multiple other non-binding but strong bids from marquee domestic and global institutional investors and family offices, it said in an investor presentation following Q2 earnings.

On Monday, after market opened, bulk deal data revealed that the ace investor had finally bought stake in the private sector lender signalling that the big bull had faith in the financial position of the bank.