Yes Bank with balance sheet size of Rs 3.46 lakh crore is in danger of losing its fourth rank to Kotak Mahindra Bank or IndusInd Bank in the near future Yes Bank, which once grew the fastest in the industry, is for the first time staring at a shrinking balance sheet in the current fiscal.

The bank with balance sheet size of Rs 3.46 lakh crore is in danger of losing its fourth rank to Kotak Bank or IndusInd Bank in the near future. Both banks are catching up fast. In 2018-19, they both grew their total assets by 18-20 per cent. The balance sheet is equal to total assets or liabilities of the bank.

Yes Bank's balance sheet has shrunk from Rs 3.80 lakh crore in March 2019 to Rs 3.46 lakh crore in the first half (April-September) of 2019/20. Kotak Bank is following closely with assets of Rs 3.16 lakh crore followed by IndusInd Bank at Rs 2.94 lakh crore. If the same level of growth in assets continues for Kotak in the near future, the Mumbai-headquartered bank would easily surpass Yes Bank. On its part, Yes Bank is unlikely to see much growth in its balance sheet because of inadequate capital and deteriorating asset quality. 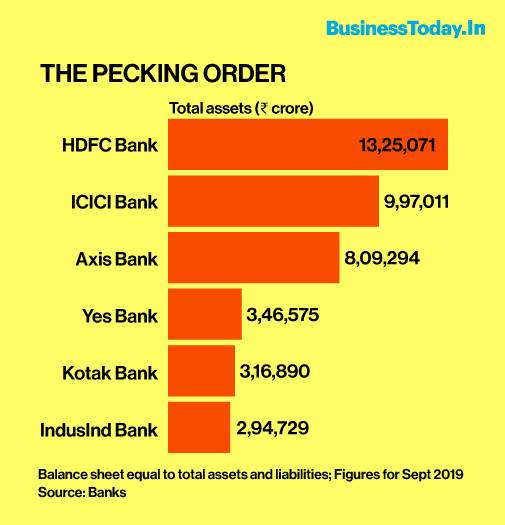 The Yes Bank's low level of core equity capital and the delay in the raising of fresh growth capital has been resulting in its shrinking balance sheet. Clearly, the bank is conserving capital as any further deterioration in its asset quality would require provisioning from the book. The bank now expects new capital to come before the end of 2019. In fact, the recent equity raising or the first tranche of capital raising was a challenge as it received around Rs 2,000 crore from over three dozen funds. The bank's estimated requirement of capital is around Rs 10,000 crore.

ALSO READ:Yes Bank to raise over Rs 8,400 crore by December, give board representation to new investors

While some say there is pressure on deposits because of consistent bad news in the market, the fall in deposits, however, is in line with overall lending book and balance sheet. Ravneet Gill, MD & CEO, recently told investors that there is no pressure with respect to any depositors. "The fact that we were able to open 1.80 lakh new accounts, the fact that quarter-on-quarter our new term deposits were up by 39 per cent, shows that depositors have full confidence in the franchise and there is no real concern." This former Deutsche India head had replaced founder Rana Kapoor as CEO after RBI refused to extend Kapoor's tenure because of asset quality divergences and other governance issues. Kapoor's family currently holds less than 5 per cent stake in the bank. 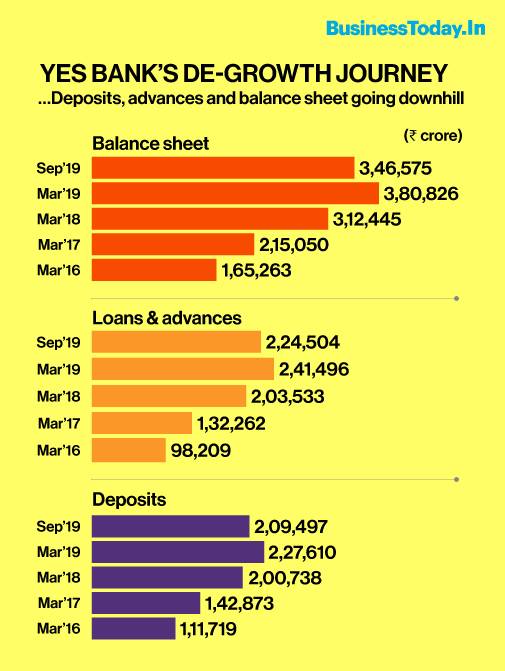 Will bank's balance sheet size shrink further? There is every likelihood due to delay in raising the growth capital. Even if capital comes in, there would be short-term challenges. The stock price has fallen big time. The bank's profitability numbers fell from Rs 4,224 crore in 2017/18 to Rs 1,720 crore in 2018/19. In the second quarter of 2019/20, the bank reported a net loss of Rs 600 crore, which is mainly because of one-time tax adjustments. Gross NPAs are at an elevated level of 7.39 per cent. Anusha Raheja, banking analyst at LKP Securities said in her report that even if the bank is able to raise capital, future profitability would be dependent on incremental NPAs and balance sheet growth, where the visibility is extremely poor.

The bank claims to have interest from a wide section of investors, which includes private equity players, strategic investors and family offices. The bank has also reported that it has received an offer from a global investor for $1.2 billion. This has to pass the regulatory test as RBI would look at antecedents of the investor for fit and proper guidelines. Equity Research firm Edelweiss commented by saying that uncertainty in terms of regulator nod is high and timing is critical. It also says capital would be highly dilutive (expansion of capital base lowers EPS, etc.) and substantial portion of it will go towards cleaning the balance sheet.