Deteriorating fundamentals and eroding stock values have pushed lenders of many debt-ridden corporates to sell promoter shares pledged with them in open market, creating concerns for the retail investors.

This week, IDBI Trusteeship Services invoked 7.62 crore pledged shares of promoters in Reliance Power to recover dues. It was met with further selloff in company's shares. Reliance Power is not alone. Shares of Anil Dhirubhai Ambani Group (ADAG) companies are under immense pressure ever since lenders initiated invoking of shares in the past few months. Subhash Chandra-owned Essel Group companies and individual names such as Apollo Hospitals and Sun Pharma too caught investors off-guard.

There is no harm in pledging shares. It is just like pledging gold for a loan. But, in case the market conditions are not good, and shares are falling across-the-board, promoters are required to maintain a margin (of safety for lenders) on collateral (shares) either by paying the additional sum or pledging additional shares. In case, the slump in stock goes out of hands, lenders exercise their rights to sell shares directly, risking promoter's control over the company. In case of Reliance Communications, promoter Anil Ambani's stake in the telecom company had dropped to 21.97 per cent by the end of March quarter (Q4) of the financial year 2018-19 from 53.08 per cent as on December 31, 2018. 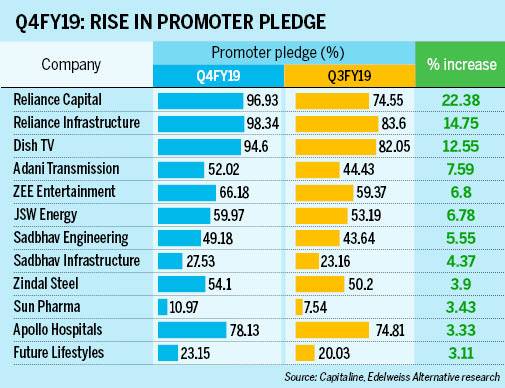 Umesh Mehta, Head of Research, SAMCO Securities says once invested in a heavily pledged company, it is a vicious circle wherein a lot of equity value could be destroyed; hence, retail investors should avoid such companies.

Here is all that you must know about promoters' pledging activity and how it affects your investment:

Pledged shares are those against which promoters in need of capital - either for personal use or company's growth -- take loans from banks and NBFCs (non-banking finance companies). For lenders, these shares are collateral. Retail investors can also take loans against their shares. In some cases, promoters borrow money to diversify in unrelated businesses.

What is the margin call?

Lenders and promoters fix a minimum contract value for the shares pledged, which is typically below the market price. This helps lenders have a margin of safety. When the market price falls below the contract value, it reduces the collateral value (value of pledged shares) and invokes margin call. Promoters are required to make up for the eroded value either by paying in cash or by pledging additional shares.

According to Mehta of SAMCO Securities, lenders offer loans to promoters as a structured product and they usually maintain a cover of two to three times the loan value. "As the minimum contract value varies from lender-to-lender and promoter to promoter, it cannot be generalised," he says.

Ankur Varman, vice president- institutional sales, Emkay Global, says fair value, business prospects and market capitalisation are three criteria used to decide the amount of loan. But, the minimum contract value is often fixed below the adequate level and the whole process doesn't work out the way, it should.

"Debt raised on the basis of shares pledged by promoters can work only if a prudent level of overall cover, commensurate with risk, is available through promoter holdings (both pledged and unencumbered) on the overall promoter debt raised through holding or investment companies," said credit rating agency CRISIL in a report.

"Such debt, backed by inherently volatile equity shares from promoters as collateral rather than cash flows are seldom repaid on maturity and often refinanced. They are, therefore, exposed to high market risk and typical transaction-level cover agreed to is often inadequate," CRISIL report added.

Lenders have the right to sell pledged shares with them if promoters fail to provide for eroded collateral. The process of selling those shares is called invocation. Not only does it reduce the promoter's stake in the company, but it also triggers a downward pressure on the stock price. As the stock falls more, there arises a need to sell more, thus creating a vicious cycle of a downward spiral on the stock.

"Promoters have to be extremely careful as they can end up losing their entire capital in the company if the price falls drastically," says Mehta. 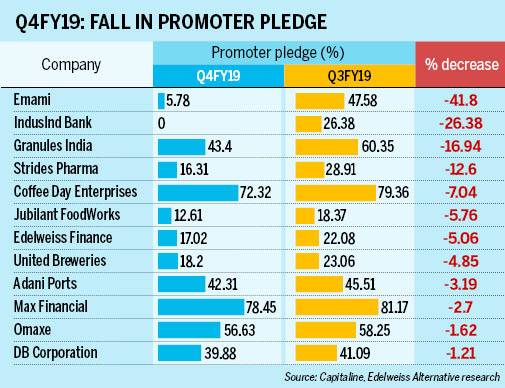 However, Varman advises investors to put faith in the business prospects of the company and not get bothered by loans pledged. "If the business is strong and is backed by sound fundamentals and solid building blocks, then events like margin calls taking stocks down are God-sent opportunities to build further positions. Though speculators on leverage may face challenges in times like these," he says.

Varman further cautions that in cases where promoters have diversified in unrelated businesses, minority shareholders should assess if the top management is good enough to take the business ahead because promoter will have his attention divided and may not do justice to the listed entity. "If top management is capable, business fundamentals intact and growth secured, then there is nothing to worry about promoters' interest in unrelated busine