Shares of Titan Company, Bluestar, Whirlpool and Voltas rose up to 2% on BSE in early trade today 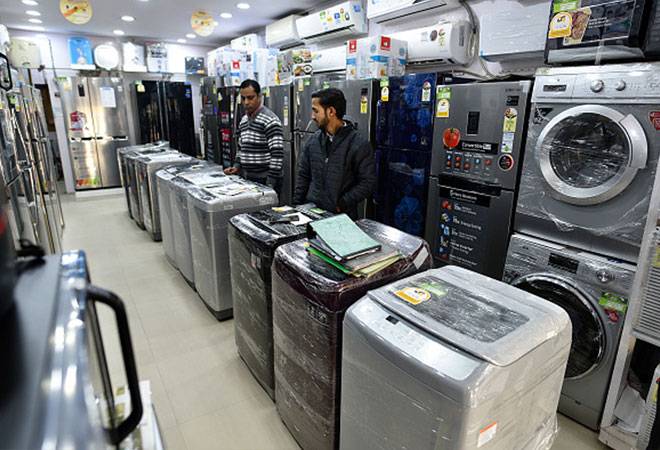 BSE consumer durables index was the top gainer among 19 sectoral indices on BSE. The index gained 238 points to hit an intra day high of 24,718 against previous close of 24,480.

Consumer durables stocks helped Sensex, Nifty to trade in green today as Finance Minister Nirmala Sitharaman announced two schemes for central government employees that are aimed at boosting festive season demand.  Shares of Titan Company, Bluestar, Whirlpool and Voltas rose up to 2% on BSE in early trade today buoyed by the announcements made by government ahead of festive season.

BSE consumer durables index was the top gainer among 19 sectoral indices on BSE.

The rise in consumer durables stock came even after Sensex and Nifty started the session on a flat note.

Similarly, shares of Bluestar and Voltas ended lower by 1.7%  and 1.74% respectively. However, Whirlpool share managed to close 1.84% higher after the festival bonanza announcement.

In order to spur demand amid economic slowdown, Finance Minister Nirmala Sitharaman on Monday announced Festival Advance Scheme that will provide a one-time interest-free advance of Rs 10,000 to all officers and central government employees, irrespective of their position, ranks, and whether they are gazetted or non-gazetted officers. The Rs 10,000 advance will come as a pre-paid Rupay card which can be spent by March 31, 2021.

The repayment will be in 10 instalments, the FM added. It is expected Rs 4,000 crore will be disbursed under this scheme, according to the government.

"If given by all the state governments, another Rs 8,000 crore is likely to be disbursed," the government added.

FM also announced the LTC Cash Voucher scheme under which government employees can opt to receive cash amount to leave encashment plus three times the ticket fare, to buy items which attract a GST of 12 per cent or more.