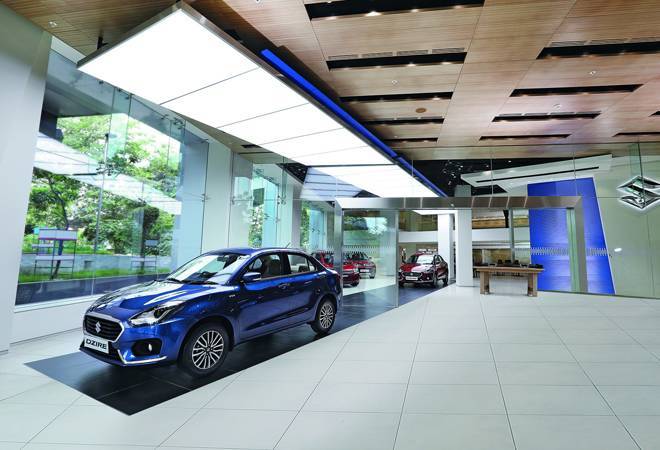 Shares of Maruti Suzuki India fell over 2 per cent in intra-day trade on Friday, extending losses for the sixth straight session, as investors weighed weak fourth quarter earnings and concern over regulatory uncertainty in the auto industry. The Maruti Suzuki share price has fallen 10 per cent in the last six trading session.

Reacting to Q4 earnings, shares of Maruti Suzuki India declined as much 2.23 per cent to hit an intra-day low of Rs 6,749 on the Bombay Stock Exchange against the previous close level of Rs 6,902.95. There was a spurt in volume trade with 1.20 lakh shares changing hands over the counter as compared to the two-week average of 0.71 lakh shares, according to BSE data.

In a similar trend, Maruti Suzuki share price dipped 2.24 per cent in intraday trade to Rs 6,750 on the National Stock Exchange after opening lower at Rs 6,805 against the previous closing price of Rs 6,905.25.

Maruti Suzuki India on Thursday reported a 4.6 per cent year on year (YoY) decline in net profit at Rs 1,796 crore in Q4FY19, while net sales grew marginally by 0.7 per cent to Rs 20,738 crore. The company had said that the earnings during March quarter was affected by adverse foreign exchange rates and commodity prices, higher depreciation and higher sales promotion expenses.

The operating margins, EBITDA (earnings before interest, tax, depreciation and amortization), for March quarter slipped to 10.5 per cent from 14.2 per cent, due to negative operating leverage, adverse inventory impact and commissioning of second Suzuki Motor Gujarat (SMG) plant leading to a higher depreciation expense.

Maruti Suzuki has announced that it will stop selling diesel cars in its portfolio--all seven of them, from April 1, 2020, when the new BS VI fuel economy norms kick in, which will make diesel vehicles significantly more expensive. The auto major currently sells a wide range of diesel vehicles, which accounts for nearly 23 per cent of all units sold by it in the domestic market.

Also Read: Maruti's decision to phase out diesel by April 2020 may hasten the end of the road for the fuel

Bajaj Auto is on an upward spiral; Hero MotoCorp, TVS far behind in valuation