Of the eight, two IPOs -- Happiest Minds Technologies and Chemcon Speciality Chemicals -- received an overwhelming response from investors and were subscribed by 150 times

The month of September bustled with eight initial public offers (IPOs) that hit the market after five-month lull. The recent IPO frenzy on Dalal street comes after a gap of almost two and a half years when an equal number of new issues was launched in March 2018. Besides, not more than three IPOs tapped the public markets in any other month during this period. In value terms, although, the amount raised roughly remains half of what had been mobilised 30 months ago and significantly lesser than what SBI Cards raised alone in March this year. So far, September 2010 remains the busiest period in a decade to have witnessed at least 15 companies going public.

Of the eight, two issues -- Happiest Minds Technologies and Chemcon Speciality Chemicals -- received an overwhelming response from investors and were subscribed by 150 times. Three others, Route Mobile, CAMS and Angel Broking managed a subscription ratio between 3 and 73 times. The balance three issues of UTI AMC, Mazagon Dock Shipbuilders and Likhitha Infrastructure will close on October 1. The month also saw stellar listing of Happiest Minds that surged 123 per cent and Route Mobile that gained 86 per cent on the listing day. 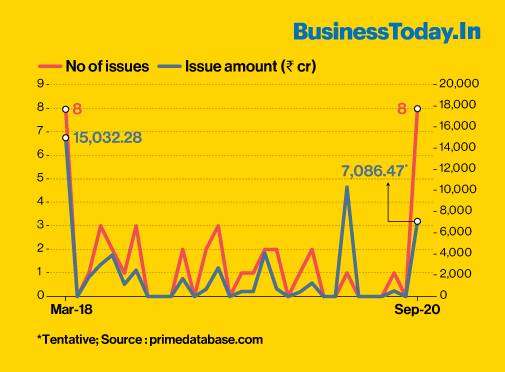 Multiple factors are driving the IPO frenzy, says Pranav Haldea, MD of Prime Database. Companies were lined up but launches were getting postponed due to the outbreak of this pandemic. Moreover, there is a buoyancy in the market largely due to excess liquidity and the primary market usually follows the secondary market with a lag, he says. "Further, the economy is in dire straits at this point in time but there are a few companies and sectors such as pharma, telecom, healthcare which advanced due to this pandemic. Some of these IPOs belong to such sectors," he added.

But there is a worrying trend too. Not many fresh filings are happening. "Only four companies have filed their DRHPs with SEBI for approvals in last four months," Haldea says.

Going forward, fear may be driving the herd as not too many IPOs are expected to hit the market in the next quarter till market stabilises. Further, Haldea expects a muted pace of filing from hereon since companies have to disclose their June quarter results if they file their DRHP with the market regulator after September 30, which is not very rosy.

Also Read: Why Mazagon Dock's IPO has an edge over UTI AMC

Also Read: UTI AMC IPO in progress: All you need to know about the share sale