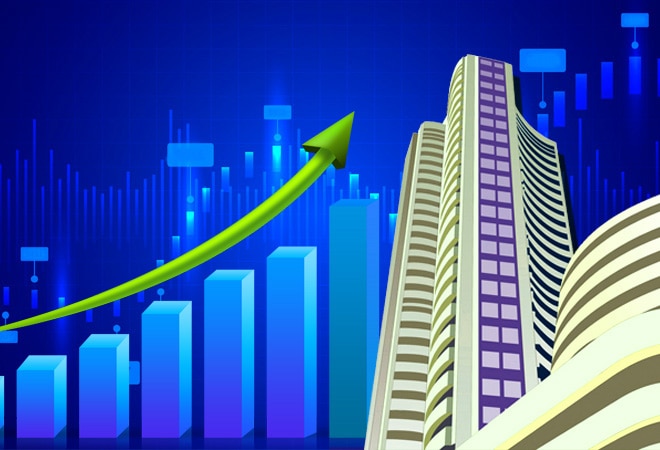 ONGC, Kotak Bank, ITC and HDFC Bank shares were the top Sensex losers falling up to 2.05%.

Extending previous session's rally, the Indian stock market opened higher on Wednesday, tracking positive cues from global peers and Nifty futures on the Singapore Exchange. AT 10:20 AM, the BSE Sensex was trading 324.41 points or by 0.64 per cent higher at 51,349.89, and the NSE Nifty was at 15,185.5, up by 87.1 points or by 0.58 per cent. Outperforming the benchmark indices, the BSE Midcap and Smallcap indices were up by 0.88 per and 0.79 per cent, respectively. Bajaj Finance, IndusInd Bank, Mahindra & Mahindra, Sun Pharmaceutical Industries, Infosys, State Bank of India were among top gainers. On the sectoral front, all the indices belled the day in positive terrain, led by realty and auto stocks.

Check live updates of the market action on BSE and NSE today.

Ashis Biswas, Head of Technical Research at CapitalVia Global Research said, "The market witnessed yet another day of lackluster movement. Nifty 50 Index is still trading below the resistance level of 15,250. The expected level should range between 14,900 and 15,250, and it's going to be crucial for the short-term market scenario to stay above the 14900 levels. While it is subject to further price action evolution, it is suggested to wait for a decisive breakout above 15,250 and technical factors to improve before going long in the market. The traders are advised to refrain from building a new buying position until further improvement."

The share climbed 3% today after the lender launched its qualified institutional placement (QIP) issue to raise growth capital. The large cap stock has gained after 3 days of consecutive fall. The share touched an intraday high of Rs 1,268, rising 2.98% against previous close of Rs 1,232.55 on BSE.

MTAR Technologies initial public offer's ( IPO) allotment status is likely to be finalised on March 10 (today). Investors, who put in bids for the Rs 600-crore IPO held from March 3 to March 5, can check their allotment status on the issue's registrar KFin Technologies Private Limited's website as well as BSE.

HPCL share rose 5% today after the firm said it would set up a compressed biogas (CBG) project at Badaun in Uttar Pradesh. The plant will have the capacity to generate 5,250 tonne of compressed biogas. Praj Industries, the Pune-based process and project engineering company will develop the plant. Share of HPCL touched an intraday high of Rs 249.45, rising 4.92% on BSE.

Shares of Magma Fincorp hit 5 per cent upper circuit at Rs 136.40 on fund raising plan. The shareholders of the company on Tuesday approved plan to raise up to Rs 3,456 crore by issuing preference equity shares to Adar Poonawalla-controlled Rising Sun Holdings Ltd (RSHPL) and two members from the promoter group.

Shares of Godrej Properties were trading 2.36 per cent higher at Rs 1,486.05 after the company launched a qualified institutional placement (QIP) issue to raise up to Rs 3,750 crore through the sale of shares.

Oil price slipped to around $68 per barrel on Tuesday as concerns about supply disruption in Saudi Arabia eased. Brent crude ended down 72 cents, or 1.06%, at $67.52 a barrel. It had touched $71.38 on Monday, the highest since January 8, 2020, a day after Yemen's Houthi forces fired drones and missiles at Saudi oil sites.

Shares of AU Small Finance Bank rose 3 per cent to Rs 1,268 in opening trade on the BSE on Wednesday after the private lender launched its qualified institutional placement (QIP) to raise growth capital.

Petrol and diesel rates remained unchanged for the eleventh consecutive day across the four metro cities on March 10. The state-run oil marketing companies had last raised the fuel prices on February 27. Petrol and diesel in Delhi remained constant at Rs 91.17 and Rs 81.47 a litre, respectively, while they stayed at Rs 97.57 and Rs 88.60 per litre in Mumbai.

There is speculation that the government may rein in fuel prices, keeping in view elections in four states and one Union Territory. Skyrocketing fuel prices is going to be one of the key agenda in the poll-bound states. Meanwhile, the government has said that it is open to a discussion on bringing petroleum products and LPG under the Goods and Services Tax (GST) system.

The foreign institutional investors (FIIs) continued to remain net seller in both equity and debt on Tuesday. The net investment of equity and debt reported were Rs 1202.22 crore and Rs -1255.96 crore.

The Indian stock markets opened higher on Wednesday, tracking positive cues from global peers and Nifty futures on the Singapore Exchange. The BSE Sensex opened 363 points or 0.71 per cent higher at 51,388.54 and the NSE Nifty belled 116 points or 0.77 per cent higher at 15,214. Outperforming the benchmark indices, the BSE Midcap and Smallcap indices opened higher by 0.94 per and 0.91 per cent, respectively. IndusInd Bank, Mahindra & Mahindra, Sun Pharmaceutical Industries, Infosys, State Bank of India were among top gainers. On the sectoral front, all the indices belled the day in positive terrain, led by realty and auto stock.

"In this see-saw game in the market, bulls & bears are giving up and regaining their dominance in tune with macro trends. A rise in bond yields temporarily strengthen the bears and when yields fall bulls come back strongly. Now it appears that the US 10-year bond yield is likely to consolidate in the 1.5% to 1.6% range for the short-term. FIIs are back to buying mode with the net buy of Rs 2850 cr yesterday. This along with DII buying of around Rs 1200  cr is likely to impart strength to the market. Financials, particularly leading private sector banks and large-cap IT stocks are on a strong wicket. Brent cooling off a bit also is  good macro news," says Dr. V K Vijayakumar.