Reliance saves the day! Else, PE-VC investments would crash 53% in 2020

PE-VC investments would have declined 53 per cent to $17.2 billion compared to the same period last year if contribution from Reliance Group entities are excluded

One of the biggest reasons for the decline is the underperformance of the infrastructure and real estate sectors, the report added. These segments attracted the highest PE-VC investment in 2019, accounting for 44 per cent of all PE-VC investments during January-September 2019. In 2020, these sectors have received only $2.9 billion in investments till date, accounting for just 10 per cent of total PE-VC investments. As a result, there has been a sharp decline in buyout activity as well, which has recorded a decline of 79 per cent in terms of value and 54 per cent in terms of volume, the report said. Infrastructure and real estate sectors accounted for 73 per cent of all buyouts by value between January and September in 2019. 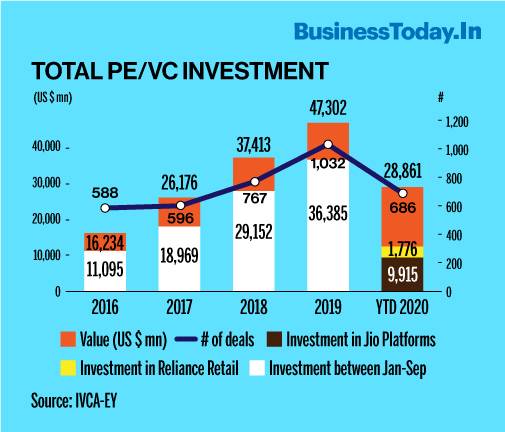