On most occasions, benchmark indices Sensex and Nifty have mostly ended with a muted response after registering high volatility throughout the session

The domestic stock market has witnessed high volatility during most Union Budget announcements in the last 10 years.

On most occasions, benchmark indices Sensex and Nifty have mostly ended with a muted response after registering high volatility throughout the session. 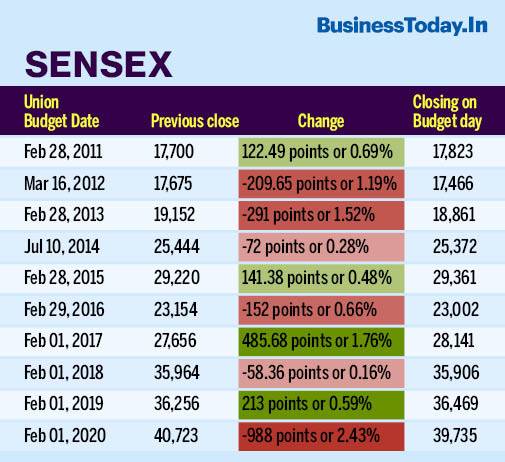 Here is how the stock market indices reacted on the last 10 Budget days:

Encouraging FII inflows, a roadmap for reforms, containing fiscal deficit were some of the key factors that led indices close in the green this year, with Sensex rising 0.69%.

In this year, there were no major negative announcements made by Finance Minister Pranab Mukherjee, including no rise in excise duty. Even the 40K crore disinvestment in Public Sector Undertakings (PSUs) by the next fiscal year supported the market sentiment. Fiscal deficit was at 4.6% this year.

The benchmark index closed 1.19% lower after the Budget 2012-13 proposed an increase in service tax and excise duty to 12% from 10% and a hike in the cess that created a negative impact on oil explorers. The Pranab Mukherjee-led last budget under the UPA government also estimated a higher fiscal deficit of 5.9% for the current fiscal that overshadowed several positives.

P Chidambaram presented the Union Budget on February 28. As the government imposed more taxes on companies as well as super-rich and offered little concessions for large investors, Sensex plunged 1.5% or 291 points to end below 19,000-level. The market also reacted negatively to higher revenue projection from divestment and spectrum sale. The fall was despite the reduction in Securities Transaction Tax on mutual fund and equity futures transactions.

After a swing of 800 points in Sensex, the index closed muted over announcements such as incentives for Real Estate Investment Trusts (REITs), increasing FDI limit in insurance and defence sector to 49% from 26%. Mr Jaitley's announcement on retrospective taxes, also led to a flat closing.

The government announced a fiscal deficit target of 4.1% of the GDP for that financial year.

Triggering huge volatility in stock markets, that was open on a Saturday, budget announcements included a cut in corporate tax by 5% to 25%, a vision for long-term taxes, GAAR being deferred and attempts to boost rural income.

After a swing of 673 points, the 30-share index climbed 0.48% by the closing session. Jaitley pegged fiscal deficit at 3.9% of gross domestic product (GDP).

In 2016, Jaitley presented the Union Budget on February 29. Sensex lost 0.66% to close above the 23K mark after the budget announcements which fell short of market expectations.

No increase in service tax, no change in capital gains tax, increase in STT on options and PSU bank recapitalisation fund failed to enthuse markets. Jaitley stuck to the fiscal deficit target of 3.5% of GDP for fiscal 2016 -17.

Budget presented by Jaitley on February 1 led to a strong rebound in the markets with Sensex surging 486 points to end above the crucial 28,000 mark. Sensex gained 1.76% in the same session, its highest Budget day gain between 2010 and 2019, as investors welcomed Jaitley's budget proposals.

Increased tax collection on account of demonetisation and reduction in the tenure of long-term capital gain tax from 3 years to 2 years were among the major moves that helped markets end on a positive note that day.

The government recommended a fiscal deficit of 3% of GDP.

Sensex ended marginally lower by 0.16%, marking it as the eighth fall in the last 10 years of budget announcements. This was Jaitley's last Budget as the FM. Long term capital gains tax was introduced in Union Budget 2018-2019. Sentiment turned weak due to proposal for higher dividend distribution tax on those earning more, and a proposal to increase Securities Transaction Tax on options and dividend tax on above Rs 10 lakh dividend receipts. The fiscal deficit was pegged at 3.3% of GDP that year.

Sensex rose 0.59% on February 1, 2019, after the budget was presented by acting Finance Minister Piyush Goyal. The Budget 2019 announcements such as increased Defence Budget for FY20 to Rs 3 lakh crore, income tax sops for nearly 30 million low-income taxpayers and 120 million marginal farmers, provided a major boost to sentiments. Agriculture and auto stocks also got a boost after favourable announcements made for farmers in Budget 2019.

The acting FM kept the fiscal deficit target at 3.4% of GDP

With no major boost for industry, budget 2020 failed to cheer the Dalal street as the market witnessed its biggest fall on February 1 since 2009. Sensex crashed 2.43% and closed right below 40K, as investors lost around Rs 3.6 lakh crore of wealth on BSE.

FM Nirmala Sitharaman presented her second consecutive budget, delivering the longest budget speech in the six years of the Narendra Modi government. As per traders, there was no major boost for any industry except for personal tax brackets. Optional income tax cuts and no relief from LTCG tax led to a crash in Sensex and Nifty on Budget day.

Markets were nervous after the announcement of the scrapping of dividend distribution tax on companies and cutting taxes for individuals. Announcement of selling govt's stake in Life Insurance Corp. of India also sparked sharp decline in stocks of private insurers. The finance minister pegged the fiscal deficit target for the year 2020/21 at 3.5% of the GDP and revised the country's fiscal deficit target to 3.8% for the current fiscal year.