The wild volatility in China's markets has stoked fears among global investors about the broader health of the Chinese economy, hitting prices of growth-sensitive commodities such as copper, which hit a 6-year low on Monday. 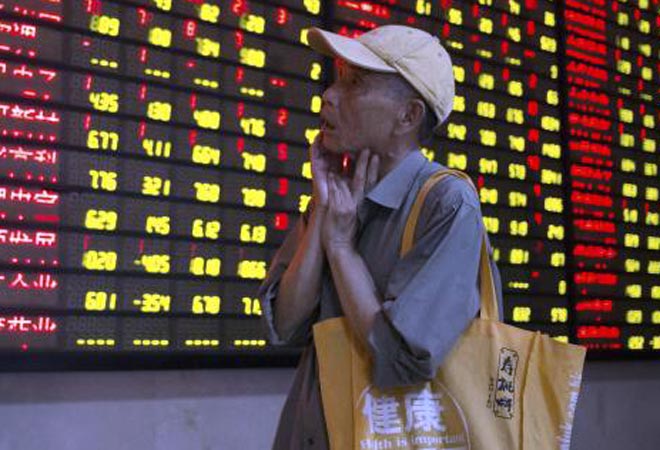 Chinese shares sank more than 3 per cent on Tuesday, as Beijing scrambled once again to stabilize a stock market whose wild gyrations have heightened fears about the financial stability of the world's second biggest economy.

After a plunge of more than 8 percent in major indexes on Monday, Chinese regulators said they were prepared to buy shares to stabilize the stock market, while the central bank injected cash into money markets and hinted at further monetary easing.

Despite that, the CSI300 index of the largest listed companies in Shanghai and Shenzhen fell 3.1 per cent in early trade on Tuesday, while the Shanghai Composite Index  lost 3.4 per cent.

Monday's dramatic slide shattered three weeks of relative calm for Chinese equities, secured through heavy government intervention in which authorities pumped liquidity into the market while effectively barring many investors from selling.

The rapid sell-off, which saw China's major indexes suffer their biggest one-day loss in more than eight years, may have been partly due to authorities testing the water for withdrawing some of that heavy-handed support.

Three people in the banking industry with direct knowledge on Monday said  that the state-run margin lender had returned ahead of schedule some of the funds it borrowed from commercial banks to stabilize the stock market.

"The authorities picked an inopportune time to float a trial balloon about scaling back market support operations," wrote Tim Condon, head of research Asia for ING Bank in Singapore, in a note on Tuesday.

"Lesson learned: sentiment manifestly remains fragile. We expect a show of force from the authorities today to ensure the market closes higher."

The wild volatility in China's markets has stoked fears among global investors about the broader health of the Chinese economy, hitting prices of growth-sensitive commodities such as copper, which hit a 6-year low on Monday.

The renewed slump helped drag shares elsewhere in Asia to three-week lows on Tuesday, and sent investors scurrying for safe-haven assets such as government bonds and the Japanese yen.

But, while recent stock market weakness will have caught out many Chinese retail investors and companies, the relatively low rate of stock ownership by households and a disconnect between valuations and economic fundamentals mean the impact on the economy is likely to be less than it would be in other markets.

The People's Bank of China said on Tuesday it would inject 50 billion yuan ($8.05 billion) into money markets in its biggest liquidity boost since July 7, near the trough of the last market sell-off.

The central bank also said, in a statement before the stock market opened, that it would use "various monetary tools" to maintain "appropriate levels of liquidity", a signal that the further monetary easing that many analysts have predicted could be in store.

China's main stock indexes had more than doubled over the year to mid-June, when a sudden swoon saw shares lose more than 30 percent of their value in a matter of weeks.

Markets finally began stabilizing again in the second week of July after a barrage of official support measures.

Beijing also cracked down on "malicious" short-sellers in the futures market, froze IPOs to prevent a liquidity drain and looked the other way as around 40 percent of companies suspended trading in their shares to escape the rout.

Sensex skids 102 pts, lowest close in more than a month