As stocks markets crash amid Coronavirus endemic, India's top billionaires have seen their wealth erode by as much as 40 per cent. On a consolidated basis the top 10 Indian billionaires have suffers losses amounting to USD 53.7 billion within a month 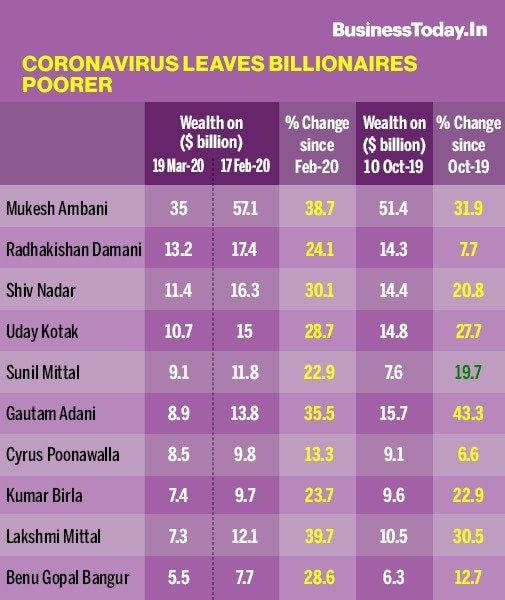 India's second richest person Radhakishan Damani, whose key to wealth is the high growth company Avenue Supermarts (D-mart). He has seen his wealth shrunk by USD 4.2 billon. Damani wealth was estimated at USD 17.4 billion on 17 Feb 2020. Since then till 19 March Damani's wealth has seen an erosion of USD 4.2 billion. The reason for the reduction of his wealth is the fall in the stock prices of Avenue Supermarts. D-mart's stock closed at a level of Rs 2,340.5 on 17 Feb. Since then, till 19 March the stock has lost 22 per cent of its value as it closed at a level of Rs 2,340.5.

Uday Kotak, a self made banking billionaire is the forth richest Indian. Amid the market fall out due to the Coronavirus pandemic, Uday Kotak has witnessed an erosion of USD 4.3 billion from his net worth. The executive vice-chairman and managing director of Kotak Mahindra bank's fortunes were USD 15 billion a month back which has declined to USD 10.7 billion till 19 March. The explanation of this is 28.6 per cent (update) fall in the stock prices of Kotak Mahindra bank from a level of Rs 1691 on 17 Feb to Rs 1207 (update) till the closing of 19 March.

Between October 2019 and March 2020, Sunil Mittal is the only Indian billionaire that has gained in wealth. Rest every billionaire has seen a dip. There has been a 19.7 increase in Sunil Mittal's fortunes in the five month time period.

The chairman and founder of Adani Enterprises, Gautam Adani has seen a wealth drop of USD 4.9 billion. Adani's net worth has tumbled from USD 13.8 billion on 17 Feb to USD 8.9 billion till 19 March, a fall of 35.5 per cent. The drop in his wealth can be attributed to the tumbling share price Adani Enterprise stock. On Feb 17 the shares of Adani Enterprises closed at a level of Rs 252.6, which have fallen by over 50 per cent to Rs 129 till 19 March 2020.

The erosion in the net worth of these richest Indians comes on the back of Sensex and Nifty logging huge losses amid the Coronavirus endemic that has paralysed the world and has started a bear run at the stock exchanges. The current bear run that Indian stock exchanges has entered into is the eighth since the year 1990. A bear run is a phase in the market when there is a 20 per cent or more drop since the all time highs. Amid the Coronavirus endemic a 11 year long bull market has come to a halt and the bears have taken over. Since 14 Jan 2020, when Sensex recorded its highest ever closing of 41,952.6, the benchmark index has shed 13,664 points or 32.6 per cent of its value. That's one third of the entire Sensex.