Rebooting Economy 67: Set the record straight before setting up a Bad Bank

India needs to collect and declare credible data on stressed assets, identify sectors and companies where these are accumulated and be transparent in insolvency resolution before jumping to a new mechanism

Now that all its mechanisms to resolve stressed assets have failed (three since 2015), India is planning yet another one by setting up a bad bank. It needs no elaboration that shifting from one mechanism to another without addressing the root causes of such failures would do no good. Two key causes of failures are well known and tough to address: political interference in running banks and poor banking governance.

There are far simpler ones to address but long neglected. One critical one is credible data on the resolution of stressed assets. But before getting there, here is a shocker.

The following graph maps data from DB2014 to DB2020 on the recovery rate in the resolution of stressed assets (cents on the dollar) which are available in its 'historical trend' database. The last DB2020 report was released in October 2019 after which the exercise was suspended due to suspected data quality in the DB2018, DB2019, and DB2020 reports. These three reports dramatically raised India's DB ranking from 130 to 63. 'Resolving insolvency' is one of the 10 indicators used for the DB index and ranking.

The graph also maps the RBI data to demonstrate the wide variance in the two databases.

Two caveats are in order: World Bank calculates fiscal year from January to December while India counts April to March; World Bank's DB reports are projections for next fiscal - for example, DB2020 was released in October 2019 - while RBI's is actual or provisional data. 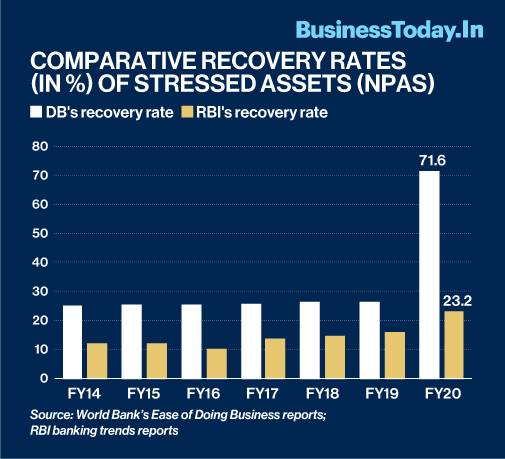 The later upswing is because of the introduction of IBC in FY17. However, notice how the recovery rate shoots up in the World Bank's DB2020 report to 71.6%, while it is nowhere close to even half in the RBI's reports. Also, note how even in earlier years the DB's recovery rates were far higher than the actual recovery data the RBI provides.

What made the DB rate shoot up so unrealistically for FY20 and how much it contributed to India's jump from 130 (of 190 countries) to 63 in ranking in such a short time? That would require a detailed probe.

The RBI maps all channels of insolvency recoveries: (i) Lok Adalat (ii) Debt Recovery Tribunals (DRT) (iii) Securitisation and Reconstruction of Financial Assets and Enforcement of Security Interest Act, 2002 (SARFAESI) and (iv) IBC of 2016 (from FY18 to FY20).

The RBI data is questionable too.

The data provided by the IBC regulator Insolvency and Bankruptcy Board of India (IBBI) has been mapped below to show the "realisable" recovery up to March 2020 (from FY17 to FY20) and up to September 2020 (Q2 of FY21). The IBC's insolvency proceedings lead to 'resolution (indebted firm continues to run)' and 'liquidation' (firm is liquidated when resolution fails) and the recoveries have been shown separately for each. Leaving out 'liquidation' is problematic for many reasons.

Firstly, the proportion of stressed assets ending in liquidation under the IBC is very high - 59% of the total debt claims (in value) up to September 2020. This is a cause of concern because (a) actual liquidation (as against those in the process) shows a realisation of 1.5%, that is a 98.5% of haircut or loss of debt (b) since such businesses shut shop it is a loss for businesses and (c) such closures lead to loss of jobs as well. (For more read " Rebooting Economy 65: IBC has failed; will a bad bank succeed?")

It says successful insolvency resolution (resolving stressed assets) needs alignment of three key sets of policies, one of which is: "A legal environment that enables banks to work out bad loans and that avoids unnecessary losses by steering distressed but potentially viable borrowers towards liquidation".

Highlighting such discrepancies in data is important for another reason.

The World Bank report further says the first lesson in insolvency resolution from a decade of experiences in Europe and Central Asia (ECA) is: "First, effective NPL resolution requires the availability of economically meaningful data about banks' exposure to problem assets. Regulators and supervisors need this information to gauge the magnitude of the problem, inform their NPL (NPA) resolution strategies, ensure that banks provision appropriately for credit losses, and follow up with banks with a high NPL exposure." The same is true about the resolution of stressed assets too.

Indian banking suffers from non-disclosures of stressed assets (NPAs) - as the RBI's Asset Quality Review (AQR) revealed in 2016. On its part, the RBI does not reveal the identity of corporate houses with stressed assets, even when it recognises that big private businesses are the main driver of it.

Such suppression of data relating to stressed assets or their resolution will certainly cause the proposed bad bank to fail too. India has already seen five resolution mechanisms to fail since 1980s: (i) Board for Industrial and Financial Reconstruction (BIFR) under Sick Industrial Companies (Special Provisions) Act, 1985 (SICA) (ii) private Asset Reconstruction Companies (ARCs) under Securitisation and Reconstruction of Financial Assets and Enforcement of Securities Interest Act of 2002) (iii) Strategic Debt Restructuring (SDR) scheme of 2015 (iv) Sustainable Structuring of Stressed Assets (S4A) of 2016 and (v) Insolvency and Bankruptcy Code (IBC) of 2016. (For more read "Rebooting Economy 66: Is India facing credit deprivation to warrant corporation banks? ")

Where are stressed assets (NPAs) located and why?

It is important to know where stressed assets are located and why for their resolution. Often public discourses are misleading on this score.

Here are two such revelations that would come as a big shock to most Indians. 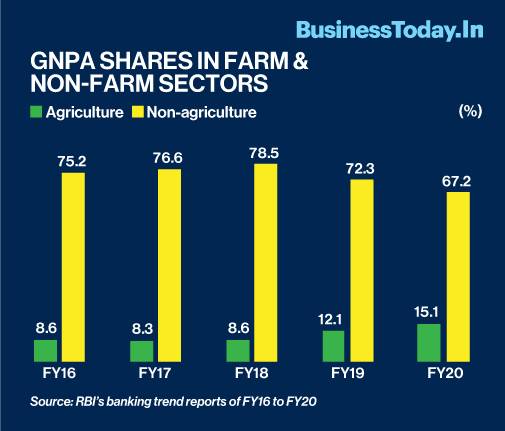 What it shows is that, contrary to objections from RBI and sundry economists, farm loans are not the real cause of stress in the economy; rather it's the non-farm loans.

Similarly, public sector units (PSUs) face the threat of being sold off to private businesses due to their poor performance (putting a burden on the economy), while it is the latter that is solely responsible for the entire stressed assets in India.

The following graph maps the NPA shares of public and private sectors in PSBs. The following graph maps the NPAs written off since FY05, as against other SCBs - private banks, foreign banks, and small financial banks. See the disproportionate burden of PSBs. Before India embarks on a bad bank, here is what a decade of experiences with such a mechanism (ARCs) in the Europe and Central Asia (ECA) region - which followed the Great Recession of 2017-18 - shows.

It highlighted three sets of policies to align together for the success: (a) robust banking regulation and supervision to ensure the proper identification of stressed assets and provisioning for credit losses (b) strengthening banks' operational readiness to work out rising volumes of problem assets and (c) a legal environment that enables banks to work out bad loans and that avoids unnecessary losses by steering distressed but potentially viable borrowers towards liquidation.

There are many other operational requirements too. The World Bank report stressed on developing a secondary market in stressed asset sales and transparency in its buyers for a bad bank that India proposes to set up to be successful.

Former RBI Governor Raghuram Rajan and his deputy Viral Acharya also emphasised these aspects in their "Indian Banks: A Time to Reform?" paper (September 2020), particularly to address the tricky issues of pricing stressed assets and write-offs that would entail, for providing market benchmarks.

Just setting up a bad bank, like the IBC or the older mechanisms before it, is not enough.