In an interview with E. Kumar Sharma, Ramanan Laxminarayan, Vice President for Research and Policy at the Public Health Foundation of India, discusses the antibiotics scenario and challenges.

Ramanan Laxminarayan, Vice President for Research and Policy at the Public Health Foundation of India, is an economist and epidemiologist by training. His research work deals with the integration of epidemiological models of infectious diseases and drug resistance into the economic analysis of public health problems. Laxminarayan also directs the Center for Disease Dynamics, Economics and Policy in Washington DC. In an interview with E. Kumar Sharma, he discusses the antibiotics scenario and challenges for India. Excerpts:

Q. How is the antibiotics resistance problem different in India considering that the problem stems more from overuse, misuse and erratic administration? Also, given that those that have developed resistance can still be useful, which should be the preferred antibiotics in India?

A. Globally, antibiotic use (both appropriate and inappropriate) is the major driver of antibiotic resistance. In contrast to developed countries, in India antibiotics are available without prescription resulting in widespread misuse. In addition, once resistance emerges, resistance can spread among bacteria very quickly in India because of poor sanitation (e.g. lack of safe drinking water, overcrowding, etc.) in the community and poor implementation of infection control practices in hospitals. Limited data available from published studies in India indicate high resistance among various bacteria-causing common infections. Bacterial infections burden in India is among the highest in the world and antibiotics play a major role in preventing deaths. High antibiotic resistance rates would thus lead to huge adverse health outcomes.

Q. How should we prevent the misuse of newer antibiotics? In India, which are the new generation antibiotics that are being by pushed by pharmaceutical companies?

A. Restricting the availability of newer antibiotics without a prescription and establishing antimicrobial stewardship programmes in hospitals are important steps to prevent misuse. In addition, widespread public campaigns aimed at the general public and chemists are necessary to increase the awareness of antibiotic resistance and encourage appropriate use of antibiotics. To prevent over-the-counter sales of important antibiotics, the Indian government included certain antibiotics in Schedule H1 category starting March 1, 2014. Schedule H1 covers 46 drugs and includes 24 antibiotics, such as third- and fourth-generation cephalosporins, carbapenems, anti-tuberculosis drugs and newer antibiotics like linezolid. Under this schedule, the chemist should retain the prescription copy and maintain a record of the patient and the prescriber details. The retail pharmacies are subjected to surprise inspections by state drug inspectors to check for violations. However, there is an absolute need for full enforcement of this provision in pharmacies to curb misuse.

Q. How does India compare with other countries?

This is indicated below in the chart taken from the paper Antibiotic resistance-The need for global solutions http://www.thelancet.com/journals/laninf/article/PIIS1473-3099(13)70318-9/abstract 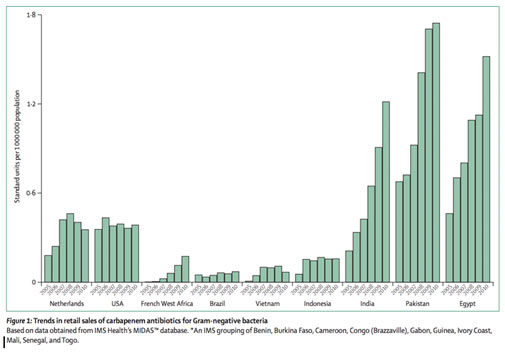 Q. Could you give us some sense of the problem in India in terms of severity and the number of people impacted?