Specials
BT Specials
Magazine Archives
News
PERSONAL FINANCE
Banking
RBI moratorium on EMIs: How much extra do you have to pay for credit card dues?

RBI moratorium on EMIs: How much extra do you have to pay for credit card dues?

In March, the central bank had allowed a three-month moratorium on payment of all term loans due between March 1 and May 31
Ashish Pandey

The Reserve Bank of India (RBI) last week announced an extension in the moratorium on payment of all term loans by another three months to help borrowers. The loan moratorium has now been extended till August 31 for 6 months owing to continuing  disruptions  on account  of  coronavirus crisis. In March, the central bank had allowed a three-month moratorium on payment of all term loans due between March 1 and May 31, also covering credit card dues.

"The credit card moratorium involves a cost. As a credit card holder, you've got 6 months extra to pay off your personal loan, but the interest burden will be quite high as compared to other types of loans (such as house loan or a vehicle loan). On an average, the extra interest burden that you would have to bear due to deferment would be somewhere between 25 to 30 percent," Pranjal Kamra, CEO, Finology, said. Kamra explained it further using an example: Suppose the account statement for the credit cycle of March 1 to March 31 is issued on April 1. The bill's due date is April 10, post which it is charged at 3.5 per cent of interest per month on the outstanding balance amount in case of non-payment.

Assuming the credit card holder transacts Rs 50,000 on March 1 and April 1 (statement day). The total outstanding balance is Rs  50,000. With an assumption that no transaction was done in the months of April, May, June, July, August and September, the below table shows the impact of the availed moratorium. 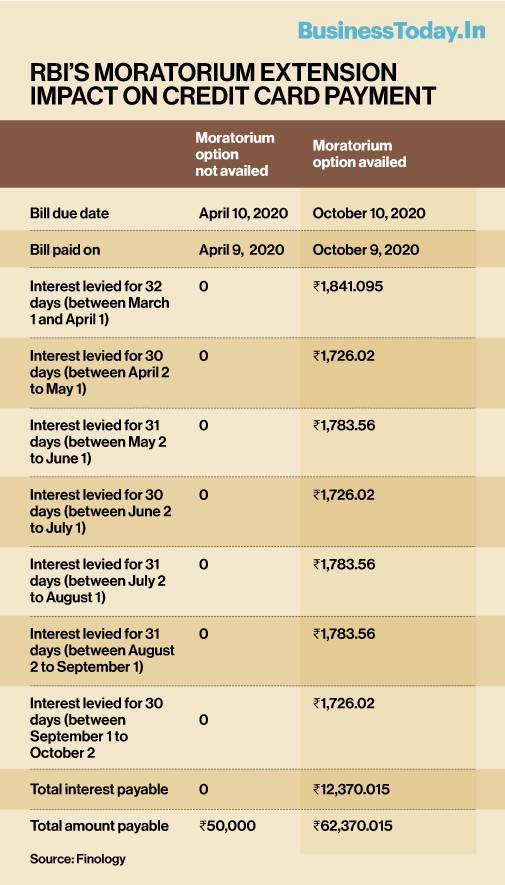 The interest levied for 32 days (between March 1 and April 1) is zero in case of moratorium option not availed by the credit card holder.

And, the interest stands at Rs Rs 1,841.095 in case of moratorium option being availed.

Commenting on the issue, Raghvendra Nath, Managing Director, Ladderup Wealth Management, said, "For a credit card holder, availing moratorium would mean paying the contracted rate of interest. Typically credit card companies charge interest on outstanding @30% or more. So the moratorium on credit cards should only be utilised if there is no other means of paying the outstanding amount." Nath further said that it would be wiser to avail a personal loan from your bank and utilise the amount to pay off the credit card debt since this way one can take advantage of the interest rate arbitrage.

According to the Statement on Developmental and Regulatory policy of the central bank, "On March 27, 2020, the RBI permitted all commercial banks (including regional rural banks, small finance banks and local area banks), co-operative banks, all-India Financial Institutions, and NBFCs (including housing finance companies and micro-finance institutions) (referred to hereafter as "lending institutions") to allow a moratorium of three months on payment of instalments in respect of all term loans outstanding as on March 1, 2020". Accordingly, the repayment schedule and all subsequent due dates, as also the tenor for such loans, may be shifted across the board by another three months, it said.

The RBI also clarified that such treatment will not lead to changes in the terms and conditions of the loan agreements which is the same as announced in the previous moratorium period.