In his response to Lok Sabha, the Agriculture Minister said that the new farm laws are meant to make agricultural markets more efficient and provide farmers better prices for their produce 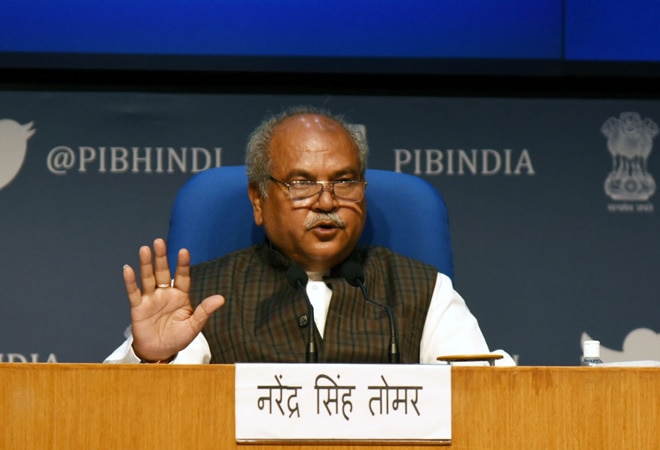 Over the last three years, 38 private entities have invested Rs 301.19 crore in farm sector markets, Union Agriculture Minister Narendra Singh Tomar told the Lok Sabha Tuesday. He was responding to questions on the benefits of farm laws and scope of private investment in farm sector markets.

Tomar also mentioned that as per National Commission on Farmers' Report (2006), there should be one market to serve 80 square kilometres whereas presently one regulated market serves 473 square kilometres. This gave rise to the need of attracting more investment in farm sector marketing.

"...in order to realise more number of markets in country and to induce competitiveness and efficiency in marketing ecosystem, there is felt need for investment in farm sector marketing. Farm laws aim at promoting agriculture marketing infrastructure and supply chain for efficiently connecting farm gate to markets for benefits of farmers' by encouraging investments," Tomar said.

The Agriculture Minister said that the new farm laws are meant to make agricultural markets more efficient and provide farmers better prices for their produce.

"The new farm laws... are intended to improve the efficiency of agricultural markets in the country by providing an ecosystem where the farmers can enjoy the freedom of choice relating to sale of farmers' produce which facilitates remunerative prices to farmers through competitive alternative channels for selling their produce. These farm Acts facilitate direct buying from farmers in trade area by traders, processors, exporters, farmer producer organisations (FPOs), agriculture co-operative societies, etc., so as to facilitate farmers with better price realisation to enhance their income," Tomar said.

"Farm laws will accelerate more investment in marketing and value addition infrastructure including that in storage facilities near to farm gate creating more employment opportunities for rural youth. Farm laws provide additional marketing opportunities to farmers for selling their produce outside the APMC market yards such as at farm-gates, cold storages, warehouse, silos, etc. to help farmers get remunerative prices due to additional competition," he further added.

Thousands of farmers, primarily from Punjab, Haryana and Western Uttar Pradesh, have been protesting for almost four months at the borders of Delhi, demanding the repeal of the three farm laws. The government has not been able to resolve the situation even after several rounds of dialogue with the agitating farmer bodies.