The farm profit per hectare for field and horticulture crops is expected to increase 3-5% in kharif season 2020 on the back of higher crop acreage, expected improvement in productivity, and government support to procurement at minimum support price 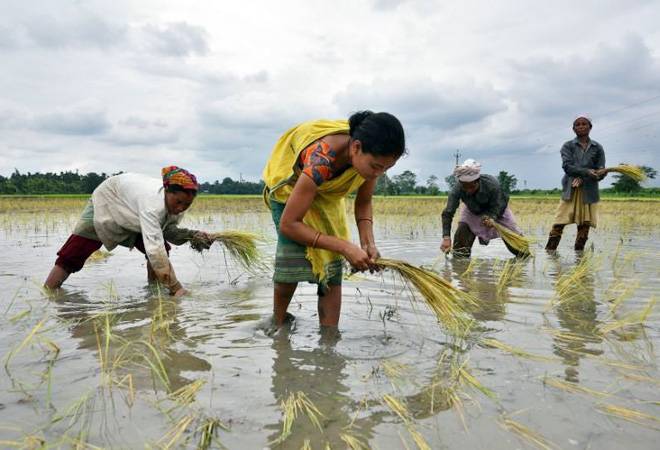 At a time when the economy faces severe impact of coronavirus pandemic, early onset and good distribution of monsoon has paved the way for robust kharif output, which would bring down prices of various commodities. A report by Crisil Research on Monday said that monsoon rains were 7% above the long-period average as of August 21, 2020. Good spatial and temporal distribution has prompted sowing across crops in most states, it said.

According to CRISIL, the spread of coronavirus pandemic in rural India remains the key issue to watch out. This is because the rural share of COVID-19 cases, which was hovering around 20% in June 2020, has spiked to around 45% now.

The agency expects a 2-3% rise in sown area on-year at around 109 million hectares for kharif season 2020. The area under paddy cultivation is set to increase because of both rains and reverse migration of labour to the eastern and southern states, it said.

Meanwhile, area under vegetables, cotton and maize would be lower than in the previous season as lower prices have discouraged farmers from sowing them.

"The CRISIL Deficient Rainfall Impact Parameter, or DRIP, scores point towards healthy performance of agriculture this year. DRIP, in addition to rainfall deficiency, considers vulnerability arising out of the lack of irrigation buffer across states and crops was red flagging Rajasthan as an adversely impacted state till early August. But with rains catching up, the risk has come down substantially," said Dharmakirti Joshi, Chief Economist, CRISIL.

CRISIL Research's analysis of 25 key agriculture commodities indicates that farm profit per hectare for field and horticulture crops is expected to increase 3-5% in kharif season 2020 on the back of higher crop acreage, expected improvement in productivity, and government support to procurement at minimum support price (MSP).

Besides, adequate water availability for critical growth stages is also expected to increase productivity by 2-3% over a low base of 2019, when delayed onset of monsoon in June followed by excess rains and flood-like situation in August-September damaged crops in most western and southern states, it said.

The report highlighted that kharif output could rise 5-6% on-year to a record, which would put downward pressure on prices of various commodities. Adding to it, government support to paddy procurement (the most critical crop in terms of farm income, given it accounts for around 30% of foodgrains production), incremental sowing of more remunerative crops and improved productivity on-year will boost profitability at an aggregate level. Besides, increase in state advised price for sugarcane is also likely to boost profitability on-year.

Among horticulture crops, apple is expected to witness higher profitability on-year because of improved yield over a low base of 2019 and also on account of anticipated increase in prices. In contrast, weak domestic and international demand will keep cotton and maize prices under pressure.

Also Read: Businesses with turnover up to Rs 40 lakh exempted from GST