Sale of automobiles in India crashed by over 40 percent in June as a broken supply chain impaired the ability of companies to manufacture cars and two wheelers. Sales have crashed by a steeper 75.5 percent in the first quarter of this fiscal, the worst performance for a three-month period, as no business could be conducted for the full month of April and for almost half of May.

Industry body Society of Indian Automobile Manufacturers (SIAM) stuck to its earlier projection of 26-45 per cent decline in sales this fiscal, the steepest ever in a year. It also played down expectations of a quick revival adding that it will take at least till 2023-24 for industry to recover to peak levels of 2017-18.

"The industry saw peak levels in 2017-18 and we saw a 18-19 percent decline in 2019-20. This year we will see another reduction of 26-45 percent across categories. So in just two years we would have seen a near 50 percent fall in volumes," says Rajan Wadhera, President, SIAM. "I am being very optimistic when I say we may return to peak levels by 2023-24. That itself would mean a strong double digit growth beyond 2020-21 which is not a given right now". 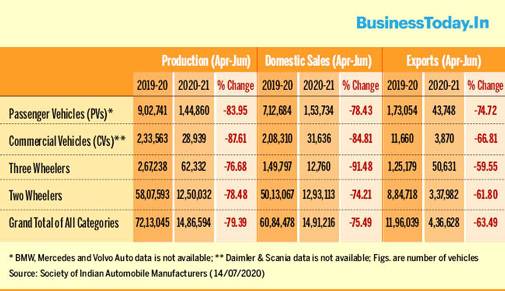 Passenger car segment registered a 58 per cent decline at 55,497 units, while utility vehicles showed a bit more resilience declining by 31.2 percent at 46,201 units. Two wheelers that account for a majority of automobiles sold in the country in terms of volumes, also declined by 38.5 percent at 10,13,431 units.

In the first quarter, passenger vehicles saw a 78.4 per cent decline in sales while two wheelers registered a 74 per cent dip, commercial vehicles by 84.8 per cent and three wheelers by 91.5 per cent. Overall industry domestic sales crashed to under 1.5 million units from over 6 million units last year.

"We need a direct fiscal stimulus that encourages customers to return to showrooms. In the past whenever there has been a slowdown or a recession, the government has helped. Be it in December 2008 or September 2012. This time too we are in constant discussion with the government but nothing has happened so far," Wadhera said.

Automobiles attract one of the highest taxes in the country ranging between 28 and 60 percent. The industry has been asking for a 10 percent across the board reduction in GST since August last year. Another long standing demand has been for a scrappage policy, wherein old vehicles can be phased out and owners incentivised so they replace them with new vehicles.

"We are staring into a very deep slowdown now. World-over we have seen governments in Europe and the US and even in developing economies in South East Asia pitch in with direct fiscal incentives to support the industry," he said. "There is very limited scope now for the industry to spur demand with discounts as profit margins only range between 6-9 percent. There is much more headroom for the government to reduce taxes."

While SIAM did not give out any figures for possible layoffs in the industry, Wadhera said retrenchments cannot be ruled out as the industry will be straddled with excess capacity for sometime now.

"In the last few years, this industry has invested a lot in increasing capacity as well as for the new BS VI emission norms. Now we are looking at a capacity utilisation of not more than 60-70 percent at the maximum. There is no case for fresh investments now," he said.

"Companies have not laid off employees yet as we are still coming out of the lockdown phase but as pressure to cut costs mount, rationalisation of workforce will be one of the ways to do that."