Once touted as the fastest growing industry in the world, passenger vehicle sales are estimated to have declined by over 17 per cent last month - steepest in a month since October 2011 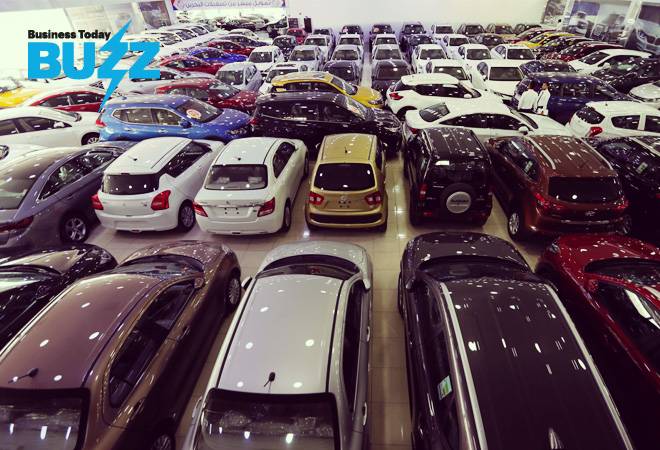 Thirty three year old Anirban Bose, an administrative clerk at a prominent South Kolkata hospital has been on the look out for a new car to upgrade his six-year old Wagon R for the last 15 months. He has deferred his plans multiple times as he is not sure if he can afford to pay the EMI for a new car.

"I am not sure if I will get a decent hike in my salary this year but my expenses are not going down. So its better to wait," he says.

Almost 2000 kilometers away, Rashid Ali in Jalore, a small town in Rajasthan, had to postpone his plans of buying a mobike due to slowdown in his field of work. Ali provides logistics services to the numerous granite mines in the vicinity but business has been slow.

"Buying a bike is the last thing on my mind now. We are just surviving," he says.

Individual stories like these, an indicator of the slowdown in the economy, has put a spanner in the growth of the automobile industry in India. Once touted as the fastest growing industry in the world, passenger vehicle sales are estimated to have declined by over 17 per cent last month (see table)-steepest in a month since October 2011. April was not a one-off. Passenger vehicle sales have now declined for six consecutive months - it last grew marginally by 1.55 per cent in October 2018. In fiscal 2019, sales grew by just 2.7 per cent, slowest in five years.

"In three of the four quarters of fiscal 2019, we registered a decline in sales in the urban pockets where our overall sales for the fiscal was down by 2 per cent," said R C Bhargava, chairman, Maruti Suzuki India Ltd, which sells one of every two cars sold in the country. "Rural markets for us was more resilient but there has been a slowdown there as well. In the first three quarters that segment grew in double digits for us but the growth has come down to just 2 per cent in the last quarter (January-March 2019)."

The distress in the industry today is largely on account of a bad festive season last year, which led to the problem of higher inventories. The automotive industry endured its worst festive season - a 38-day period in autumn that typically accounts for 25 per cent of industry's annual sales - in five years in 2018. Factors such as high crude oil prices that went up by over 45 per cent year-on-year in the April-October 2018 period, increase in interest rates by 25 basis points in the first half of last fiscal and change in insurance regulation that led to a hike in insurance premium acted as major headwinds. Added to that, a general sense of doom - of low wages and uncertain job prospects that has affected people like Bose and Ali.

While the overhang of unsold stocks from 2018 is still being felt at dealerships, limited offtake that is typical of any election year, has meant it has taken longer for the industry to diffuse the situation. But growth in future is uncertain.

"We have seen it in 2009 and 2014 that everything slows down before general elections. But unlike previous years, we cannot expect the market to automatically pick up after elections. There are some favourable and some not-so-favourable factors that were not there earlier," says Bhargava. "For now the unfavorable factors such as uncertainty over oil prices, the current sluggishness in demand and the impact of new safety norms and changeover to BS VI fuel in the latter half of the fiscal (2020) that will push prices up, outweigh the favourable factors."

The level of uncertainty is such that even companies like Honda that bucked the trend in April and was the only company to post a year-on-year growth, is cautious about its prospects for the rest of the year.

"Our April sales growth is primarily due to lower base effect, as there was no Amaze in corresponding month last year during model runout. The ongoing elections and overall subdued market sentiment continues to affect the sales momentum," says Rajesh Goel, Senior Vice President and Director, Sales and Marketing, Honda Cars India Ltd. "Going forward, the industry is heading towards a tougher year impacting sales due to volatility in fuel prices, increase in car prices owing to new regulations and stricter inventory control for smooth switchover to BS6 regime by year end."

The distress in the hinterland of the country on account of agrarian distress is well captured by two-wheeler sales, which have declined for five straight months now. In April, sales are estimated to have dropped by more than 16 per cent. In fiscal 2019 as a whole also, sales had grown by a tepid 5 per cent, slowest since 2015-16. 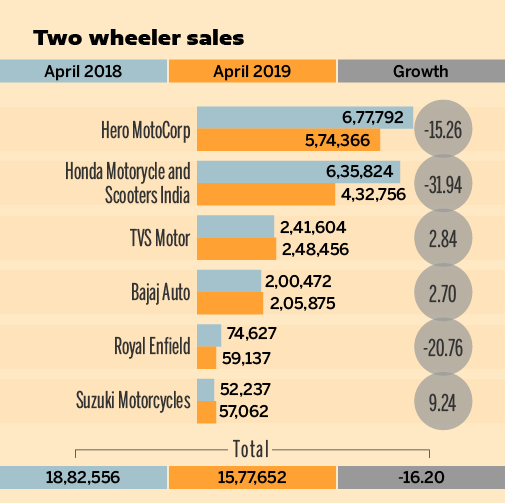 "Most of this inventory pileup happened because of a poor - a relatively poor festive season. I guess this is not something that happened only in quarter 4 (but) started well into the festive season," said Sanjay Bhan, head of sales and after sales at Hero MotoCorp. "Everyone has clearly made an effort to correct their stocks and the buildup for the festive season is something that we are correcting now. We've also made some significant corrections in the month of March and expect some more in quarter 1 (April-June 2019) as well. This year is going to be a tale of two halves. I think the first half will be muted, but overall, for the year, we do expect a mid-single digit number."

The slowdown in demand has already impacted the bottomline of the industry, which is going to be further dampened by a host of regulatory challenges in this fiscal. Maruti registered a 4.6 per cent decline in profit for the last quarter of fiscal 2019 despite a 1.4 per cent increase in revenue as high discounts and unfavorable currency movement ate into its margins. Its profits for the full fiscal also declined by 3 per cent on a 5.4 per cent growth in revenues.

The onset of new safety norms, which makes features like anti-lock braking system, dual airbags, seat belt reminder etc, mandatory from the middle of this year will add to the cost of manufacturers. In a market where consumers need to be lured into the showrooms, the ability for the industry to pass on the cost is suspect. It is something that has already impacted the two-wheeler segment where costs have gone up but the demand has remained subdued.

"The next one year will be tough for the industry," says Vishnu Mathur, director general at Society of Indian Automobile Manufacturers (SIAM). "The changeover from BS IV to BS VI is very capital intensive. Also keep in mind we are leapfrogging in three years what even developed economies like Europe have done in 7-8 years. In the end, it is the industry that needs to implement the changes and when it is not making enough money, it becomes even more challenging."