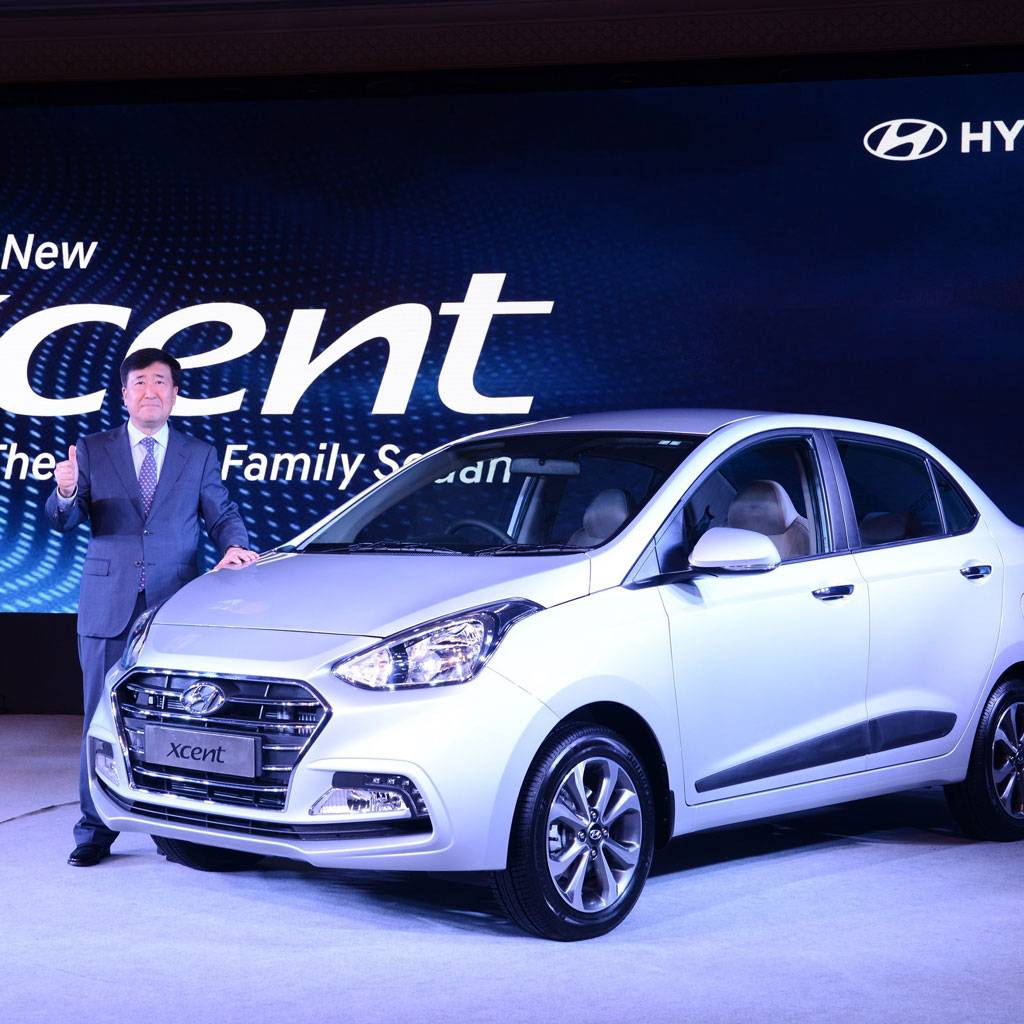 YK Koo, CEO and MD, HMIL, at the launch of the all-new Xcent in Delhi

South Korean automaker Hyundai Motors upped the ante in the highly competitive sub-4-metre sedan market with its pepped-up Xcent, featuring some sporty design cues and a bigger diesel engine. The petrol and diesel variants of the new-look Xcent are priced between Rs 5.38 lakh and Rs 8.42 lakh, ex-showroom Delhi.

Competing with highly successful sub-4-metre prodigies such as Maruti Suzuki DZire, Honda Amaze, Volkswagen Ameo and Tata Tigor, the car boasts an all-new Hyundai-signature cascading grille design with prominent horizontal chrome slats for a bold and wider stance. Plus there is a redesigned bumper with LED daytime running lights and blackened headlamp units.

Speaking at the global launch in Delhi, YK Koo, Chief Executive and Managing Director, Hyundai Motors, said that the company sold more than 2.5 lakh Xcent since 2014 and the new model would be a major attraction for the export market.

"We have shipped over 90,000 Xcent to various markets in Africa and Latin America. As these changes turn the Xcent into a stylish family sedan, we are looking at some sizeable chunk of the compact sedan market," he added.

While the petrol engine of Xcent remains unchanged, a new 1.2-litre, 4-cylinder naturally aspirated diesel engine that develops 83 PS@6,000 rpm and 114 Nm@4,000 rpm power has been added. This engine is paired to either a 5-speed manual transmission that delivers fuel efficiency of 20.14 kmpl, (1.04 kmpl higher than the earlier model) or a 4-speed automatic transmission that delivers 17.36 kmpl, which is 1.26 kmpl higher than the previous version.

Hyundai is taking its production to 7,00,000 units from 670,451 units manufactured in the financial year 2016-17. With the new launches, the company is aiming to further increase the domestic sales from the 509,750 units sold in the last financial year.

Hyundai Motor is a wholly owned subsidiary of Hyundai Motor Company and it is the largest passenger car exporter from India. It shipped 167,120 cars out of India in the financial year 2016-17 to 87 countries across Africa, the Middle East, Latin America, Australia and the Asia Pacific. It currently sells 10 brands, namely, Eon, Grand i10, Elite i20, i20 Active, Xcent, Verna, Elantra, and SUV's, including Creta, Tucson and Santa Fe.

Sharing the domestic strategy for India, Rakesh Srivastava, Director of Sales and Marketing at Hyundai, said, "We are striving for 17 per cent market share in India in these challenging times post demonetisation. We expect the market to improve during the second half when the major reform Goods and Services Tax (GST) kicks in and makes pricing of cars more transparent across India."