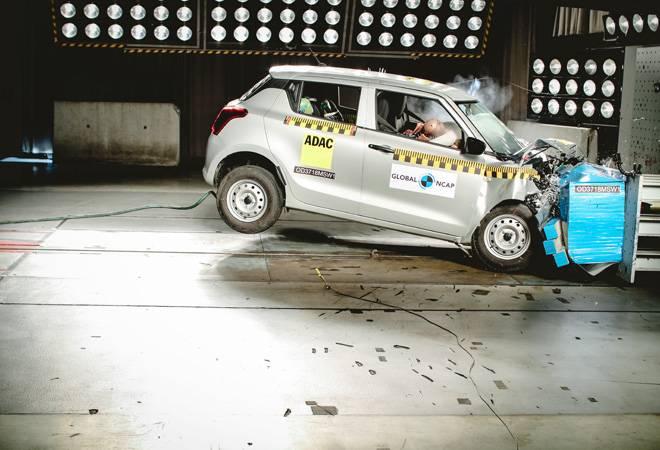 The new Swift that was launched at the Delhi Auto Expo in February earlier this year comes with some active safety features like dual airbags in the front as standard. The two star rating for the car is an improvement over a similar test that was conducted on the previous generation version of the car in 2014, which did not come with dual airbags. Even then, it is a step back for the Indian car maker as the new Swift is the worst performer among cars that have been tested by Global NCAP in India that come with at least 2 airbags. Other small cars like the Volkswagen Polo, Toyota Etios Liva or compact sedans like Tata Zest and Ford Aspire have scored four stars in their dual airbag variants.

"The two star result for adult occupants is due to high compression to the driver chest, unstable structure and poor protection for the feet explained by pedal displacement on the driver side," Global NCAP said in a statement.

"The Child Occupant Protection of only two stars is explained by the forward facing positioning of the 18 month old dummy in the test offering low protection and also the low protection offered to the chest of the 3 year old dummy."

The poor results also seem to reiterate a perception that is gaining ground that Maruti Suzuki is compromising on safety at the altar of high fuel economy and low price. It has also been criticised for differential treatment to consumers from different markets and taking recuse under lax safety norms in India.

"In comparison to its predecessor tested by Global NCAP in 2014, the new Swift offers two standard airbags and I-size approved anchorage points for CRS which demonstrated a two star performance in safety tests. However, comparing it to its twin model for the European market, the Indian version underperformed in the frontal crash test and is offering less safety features like side body and curtain airbags and Electronic Stability Control (ESC) that are standard for Europe, but in India are not even optional," Global NCAP said.

Ironically only last month, Maruti's best selling compact SUV Vitara Brezza that is based on the same platform as the Swift and Dzire, scored four stars in the tests.

"Maruti Suzuki proved with the Brezza that they can produce locally models with high safety performance," said Alejandro Furas, Global NCAP Technical Director. "They should do the same with the Swift and at least make it available in the model range added safety features available as standard in the European and Japanese version."

The NGO that has been advocating doing away with zero star rated cars altogether, first grabbed headlines in India on the eve of the biennial Delhi motor show in January 2014, when it tested five Indian cars. All of them -- Tata Nano, Maruti Alto 800, Hyundai i10, Ford Figo and Volkswagen Polo, fared miserably and scored a zero. Since then it has given heart burn to Indian car companies on numerous occasions. Ten months later, Datsun Go and Maruti Swift could not muster pass marks. In 2016, the base variants of the Kwid, Hyundai Eon, Maruti Celerio, Eeco, Honda Mobilio, Tata Zest and Mahindra Scorpio, all scored zero stars as well. Last year, the Renault Duster and Chevrolet Enjoy also joined that list.

"The latest version of the Swift sold in India has improved and it is good to see dual airbags as standard. This confirms the beneficial effect of the Indian Government's new crash test regulations," said David Ward, Global NCAP Secretary General. "But the performance of the Swift sold in Europe and Japan shows that a better safety performance is still possible so Global NCAP would like to see Maruti Suzuki aim higher."