In the BS VI era, the company has discontinued the diesel version of the car which made it imperative for it to launch the turbo-petrol engine to stay relevant in the highly competitive segment It has an ARAI rated fuel efficiency of 16.5 kmpl in manual transmission and 16.42 kmpl in the CVT version

French carmaker Renault India on Monday plonked a 1.3 litre turbocharged petrol engine to its compact SUV Duster and priced it at Rs 10.5-13.6 lakh.

Duster was one of the first movers in India's compact SUV category and enjoyed a bull run for the first two years before getting outrun by the likes of Hyundai Creta and much later by Kia Seltos. In the BS VI era, the company has discontinued the diesel version of the car which made it imperative for it to launch the turbo-petrol engine to stay relevant in the highly competitive segment. A turbocharged petrol engine gives more power and performance from a smaller engine without any compromise on fuel economy. Duster's 1.3 litre Turbo Petrol engine delivers a maximum power and torque of 156PS @ 5500 rpm and 254 Nm @1600 rpm respectively. It is mated with 6-speed Manual Transmission and X-Tronic CVT gearshift with a 7 speed Manual mode and is available in 3 trims in MT - RXE, RXS and RXZ and 2 trims in CVT - RXS and RXZ. Along with the turbocharger, the engine comes with technologies like gasoline direct injection (GDI) which provides high performance and efficiency, Dual Variable Valve Timing (VVT) for higher torque at lower rpm and reduced emissions. It has an ARAI rated fuel efficiency of 16.5 kmpl in manual transmission and 16.42 kmpl in the CVT version.

Duster is also offered with the existing naturally aspirated 1.5 litre Petrol engine that comes only with manual transmission and is priced at Rs 8.6-10 lakh. 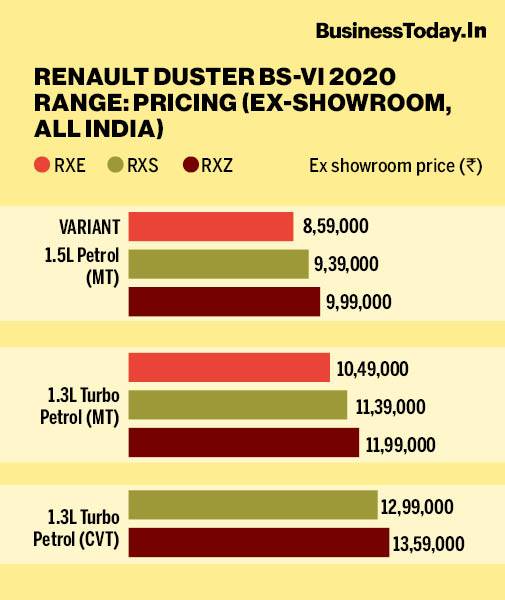 "The launch of Renault Duster equipped with the 1.3L Turbo Petrol engine marks a new chapter in the Duster journey in India. This is a world-class engine and powers our successful global SUVs and Crossovers like Kadjar and Arkana," said Venkatram Mamillapalle, Country CEO & Managing Director, Renault India Operations. "Duster has achieved an iconic status in one of the most dynamic automotive markets. Over the years, adventure enthusiasts and numerous Indian families have established a strong bond with this True SUV. The bold and more powerful DUSTER will surely inspire more people to join the growing family of adventure seekers and explore new terrains and horizons, as well as enjoy the effortless driving experience."

While tweaking the engine options for the BS VI emissions regime, the company has also made minor modifications to the styling of the car to keep it relevant. On the outside, changes include crimson red accents on the front grille, tail gate, roof rails & fog lamp cover. The grille itself is doused with chrome with dual tone body colour front bumper with skid plates, signature projector headlamps with LED DRLs and new R17 forza diamond cut alloy wheels.

On the inside, Renault has added to the feature list with pre-cooling function which allows the customers to switch on the engine and start the air conditioning even before entering the car with the key fob, something that has become standard in this category. It gets a fully integrated 17.64 cm touchscreen MediaNAV Evolution that comes with Apple CarPlay, Android Auto, voice recognition and EcoGuide. Music is played through ARKAMYS tuned audio experience with 4 speakers and 2 front tweeters. The car also gets fully automatic climate control and smart start/stop function which automatically switches off the engine when the car is stopped and re-starts on driver demand detection.

Audi, Mercedes expect sales to bounce back in festive season