The Renault Triber is less than four metres long, making it the only sub-four-metre offering with three rows in India after the Datsun Go+ MPV. 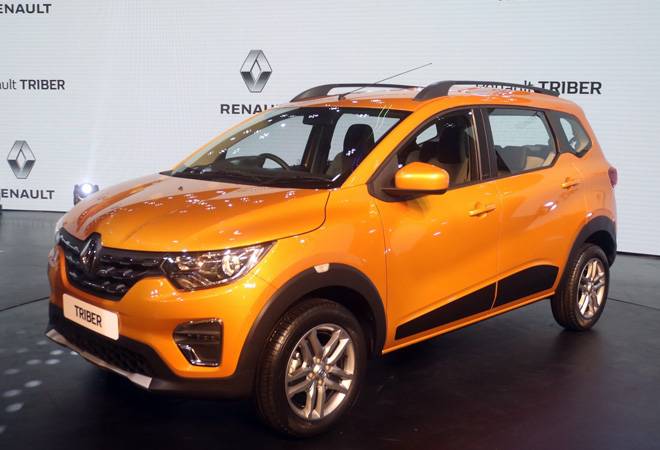 Renault Triber MPV made its global debut in India.

French automaker Renualt has unveiled its seven-seater MPV Triber for the global markets in India. The compact MPV is Renault's first offering in India after almost two years. The Renault Triber is less than four metres long, making it the only sub-four-metre offering with three rows in India after the Datsun Go+ MPV.

The Renault Triber is based on a modified version of the CMF-A platform that underpins the Kwid. The Triber MPV borrows the Kwid's design language too, featuring a similar stance and lines. The front bears a three-slat grille with chrome inserts that is dominated by the Renault logo in the middle. The straight grille looks similar to the one on Kwid, instead of the V-shaped ones seen on the latest offerings by Renault. The grille is flanked by headlamp clusters carrying projector headlights with LED DRLs underneath. The front bears a sculpted clamshell bonnet, giving the Renault Triber an aggressive look. The back is square with straight taillamp clusters, and the Renault and Triber badges in the centre. To complete the rugged look, the Triber also sports faux skid plates at both front and back.

The inside of the Renault Triber gets a dual-tone deep black and greige interior, with use of chrome edges in the central console. It also bears an 8.0-inch touchscreen infotainment system equipped with Android Auto, Apple CarPlay, push-to-talk functionality and video playback. The instrument cluster is a 3.5-inch LCD panel. The infotainment system also comes with smart features like driving-style coaching and driver economy rating. On the inside, the third row in Renault Triber comes with EasyFix seats that can be folded to create up to 625 litres of boot space. The third row comes with its own set of AC vents, armrests and charging ports. The second row is adjustable horizontally and comes with a reclining and split folding function. The modular seating is flexible enough to provide various configurations, as and when required.

The Renault Triber is powered by a tweaked version of Kwid's 1.0-litre BR10 three-cylinder petrol engine. The motor can produce 72hp of max power and 96Nm of max torque. It is the same as the 1.0-litre SCe petrol engine being used in other global offerings like Renault Clio and Dacia Sandero. Renault is likely to add a turbocharged 1.0-litre petrol engine to the Triber line-up by mid-2020. As for the rest of the powertrain, the Triber gets 5-speed manual transmission as well as 5-speed automated manual transmission (AMT). 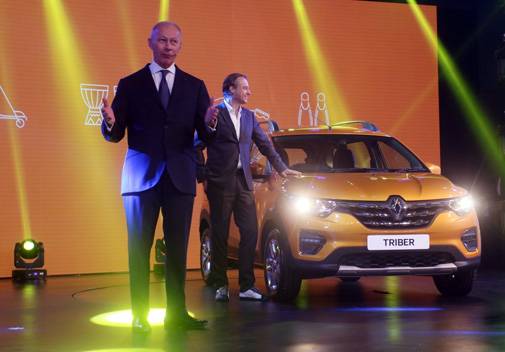 On the security front, the Triber comes with four airbags, rear parking sensors, three-point seatbelts for all rows, speeding alert and reverse camera. The top trim of the Renault Triber is fitted with 15-inch alloy wheels, whereas the lower variants get 14-inch wheels.

Renault is expected to officially launch the Triber in India during the coming months. It will go up against the B-segment hatchbacks and compact SUVs in the market. The prices are expected to begin from Rs 5.3 lakh. ALSO READ:Renault Triber teased ahead of global launch on June 19