Renault Triber teased ahead of global launch on June 19

The Renault Triber is slated to be launched globally on June 19, and will be placed above the Renault Kwid in the French automaker's portfolio in India 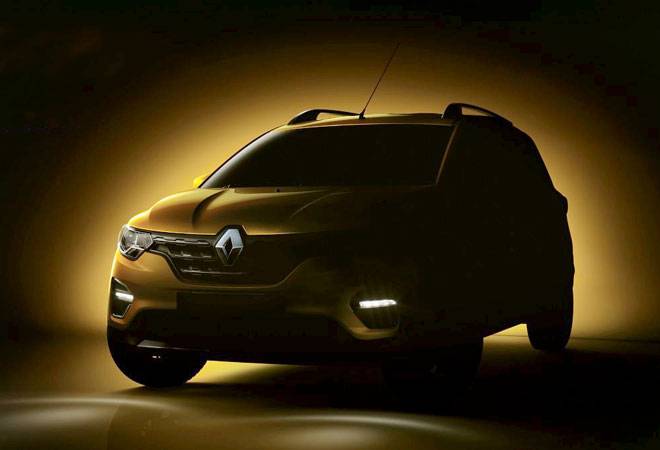 Renault India has revealed a teaser of its upcoming Triber MPV ahead of its global launch later this week. The Renault Triber is slated to be unveiled globally on June 19. The French automaker is likely to place its new MPV as a compact car above the Renault Kwid.

The teaser shows the front details of the Renault Triber and the overall silhouette of the car. The Triber MPV comes with a V-shaped three-slat grille with chrome details and the huge Renault logo in the middle. The front also shows projector headlamps and LED DRLs, with chrome accents at the edges of the LED cluster. The front face of the Triber MPV looks similar to that of Renault's latest offerings, like the Captur SUV.

The bonnet of Renault Triber features some sculpted lines which accentuate its sporty look. Stance-wise, the Triber sits wide. The teaser also shows roof rails which are expected to be seen at least in the top-spec model.

On the inside, the Renault Triber will feature dual-tone interiors. It will also borrow some interior elements from the upcoming Captur and Duster by Renault. The central console will feature a large touchscreen infotainment system with support for Android Auto and Apple CarPlay. The system will also support some intelligent features like driving-style coaching and a driver economy rating.

The seven-seat version of the Renault Triber will come with dedicated AC vents for the third row. The third row can be folded to make more boot space.

On the security front, the Renault Triber will come with dual front airbags, ABS, rear parking sensors and a speed warning system as standard. The Renault Triber is expected to feature a modified version of the CMF-A modular platform underpinning the Kwid. The platform will make the car safer during crashes and compliant with the new safety norms that will come into play from October 2019.

As for the powertrains, reports suggest that the Triber will be powered by a tweaked 1.0-litre BR10 three-cylinder petrol engine that has been seen in the Kwid. The motor will be more powerful than its original iteration seen in Kwid hatchback. Initially, the Triber will come with 5-speed manual transmission, but a variant with 5-speed AMT gearbox might be introduced later.

The Renualt Triber might by priced in the range of Rs 5.3-8 lakh in India.

Hiring activity increases 11% in May; IT, BPO, education take the lead: report