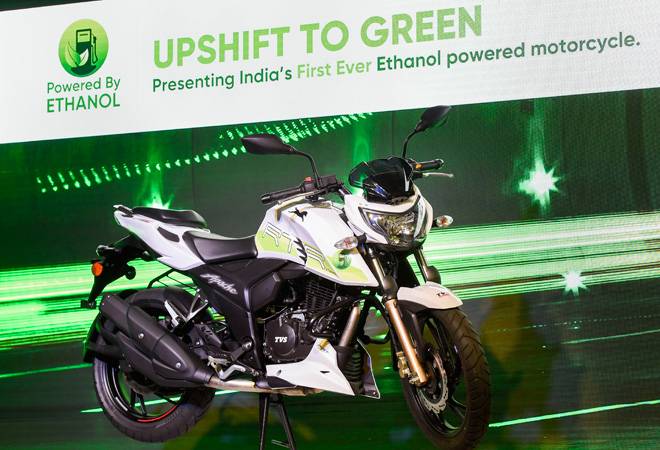 With the government mounting serious pressure on the domestic two-wheeler industry to move away from fossil fuel vehicles and look at alternate energy, country's third largest two-wheeler maker TVS motor company on Friday launched an ethanol-based version of its 200cc sports-bike Apache. At a price of Rs 1.2 lakh, this version costs about Rs 11,000 more than the comparable petrol variant. It is capable of running completely on ethanol and does not need to be blended with petrol at all. The bike will initially be available in Maharashtra, Uttar Pradesh and Karnataka.

Ethanol has been successfully used as an alternative to petrol in markets like Brazil and can be particularly helpful in India, which imports crude worth $128 billion annually. Around 10 per cent of it - about $13 billion - is used by motorcycles alone.

"For the last 12 years, I have been constantly saying that India needs vehicles run on bio-fuels, so I am glad that TVS has finally launched a mobike that is capable of running only on ethanol," said Nitin Gadkari, minister for road transport and highways. "Pollution is a real challenge for us and this is the time to solve it. We need vehicles that run on bio-fuels as well as electricity to completely replace our existing fossil fuel based industry. This will not only reduce our oil import bill and save foreign exchange for us, it will also eradicate pollution from our cities."

TVS had first showcased a concept Apache RTR 200 4V Ethanol in Auto Expo 2018 held in Delhi. The launch of the bike on Friday, however, was a bit of a misnomer as India is currently struggling to even achieve 10 per cent blending of ethanol with petrol for the transport industry due to lack of production of the bio fuel. According to reports, India is set to log its highest ever 7.2 per cent blending of ethanol with petrol by November this year. As such, 100 per cent ethanol is simply not available anywhere in the country. TVS said RTR 200 Fi E100 can take a maximum 20 per cent petrol blended with 80 per cent ethanol.

"I have asked the petroleum ministry to allow pure ethanol pumps to be set up but they have been reluctant so far due to lack of any vehicles for it. Now that such vehicles are being launched, I will renew my efforts," Gadkari said. Ethanol production from molasses and sugarcane juice can be easily ramped up in sugar producing states such as Uttar Pradesh and Maharashtra where we have excess sugar capacity. Right now, the ethanol economy is at Rs 11,000 crore and we should end this year at Rs 20,000 crore. My dream is to take it up to Rs 200,000 crore."

This motorcycle boasts of an impressive peak power of 21 PS @ 8500 rpm with a torque of 18.1 Nm @ 7000 rpm and has an ascending top speed of 129 kmph. Ethanol is domestically produced from renewable plant sources. It is non-toxic, biodegradable, as well as safe to handle, store and transport. An oxygenated fuel that contains 35 per cent oxygen, Ethanol reduces nitrogen oxide emissions from combustion. Apart from this, Ethanol also helps reduce carbon monoxide emissions, particulate matter and sulphur-di-oxide. Use of Ethanol as a fuel will also reduce dependence on the import of petroleum and increase energy security.

Beyond the benefit to the environment, the advantage to customers on the cost of ownership is likely to be minimal. Currently, ethanol is priced at around Rs 52 per litre compared to petrol being priced at Rs 72 per litre. However, thanks to lower calorific value in ethanol compared to petrol, about 1.3 litre of ethanol worth Rs 68 needs to be burnt to get the same mileage as that of petrol.

"Today, the two-wheeler industry is looking at green and sustainable future mobility solutions spanning across electric, hybrid and alternate fuels. We believe that Ethanol-based products are an important option for our customers," said Venu Srinivasan, Chairman, TVS Motor Company. "This is due to the easy compatibility in transition to ethanol and its sustained positive impact on the environment without compromising on performance and total cost of ownership."

"As one bike maker we do not have the strength to move sugar mill owners into ethanol production so we need the support from the government as well as other players in the industry," he added. "As and when the availability goes up, the bike will be launched across the country."