The airline now operates just 14 planes -- way down from 123 planes in operations at the peak; government awaiting a report from the DGCA to decide whether Jet can continue to fly on international routes. 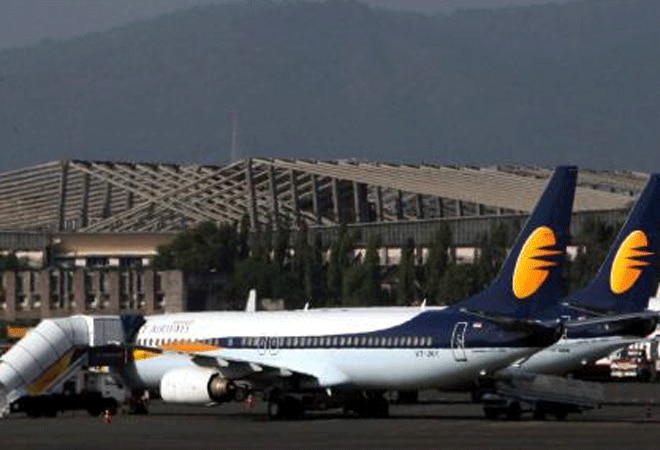 Jet Airways flights to London, Amsterdam and Paris from Mumbai, New Delhi and Bengaluru scheduled for April 12 have been cancelled.

Curtains seem to be finally drawing on crippled Jet Airways as the once-leading carrier Thursday grounded its services to and from the East and Northeast regions and suspended its international operations for a day. The drastic measure was announced after the airline informed the exchanges that it was forced to ground 10 more planes due to non-payment of rentals to the lessors.

"Jet Airways flights to London, Amsterdam and Paris from Mumbai, New Delhi and Bengaluru scheduled for April 12 are cancelled for operational reasons" said an airline source close to the development. The airline will not operate on the Bengaluru-Amsterdam-Bengaluru route on April 13 as well. Earlier in the day, the airline announced grounding of 10 more planes due to non-payment of rentals to the lessors.

"All Jet operations to and from the Eastern and Northeastern regions are suspended. Following this, there are no Jet flights to and from Kolkata, Patna, Guwahati and other airports in the region," said a travel industry source. When contacted, Jet Airways said its Mumbai-Kolkata, Kolkata-Guwahati and Dehradun-Guwahati via Kolkata stand cancelled for Friday due to "operational reasons."

Jet Airways may not fly beyond April if it does not get Rs 1,500 crore in a week

As of Thursday noon, the airline operated just 14 planes -- way down from 123 planes in operations at the peak. "Jet flight 9W 615 Mumbai to Kolkata and 9W 675 from Kolkata to Guwahati on April 12 are cancelled due to operational reasons. Similarly, 9W 676 from Dehradun to Kolkata via Guwahati has also been cancelled until further notice," Jet said in a statement, adding refunds are being processed. According to industry sources, the airline now owes more than Rs 3,500 crore to passengers on account of flight cancellations alone.

Earlier, in the day the aviation secretary Pradeep Singh Kharola told PTI that the ministry was awaiting a report from the DGCA to decide whether Jet can continue to fly on international routes. The government rules stipulate an airline must have at least 20 planes for operating international operations. Of the 14 aircraft that it is operated till Thursday evening, eight were wide-body B777s (seven) and an A330-- generally used for long-haul international operations. The remaining six planes were three B737s, which are largely used for flying on domestic routes besides on short- haul international routes and the rest three are regional ATRs.

Relief for Jet Airways! There are parties interested in buying stake after all