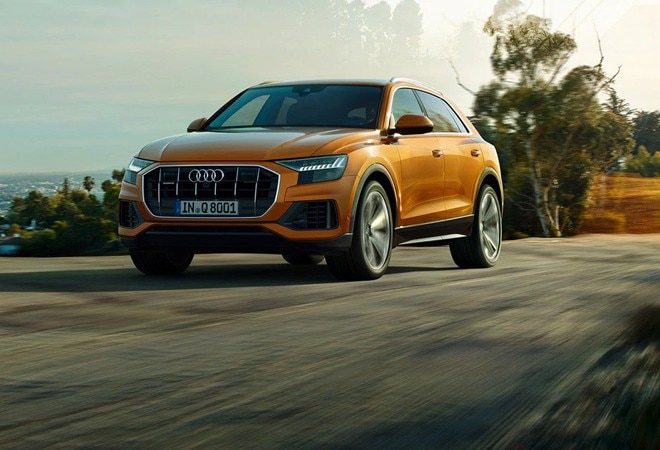 A combination of a four-door luxury coupe and a versatile SUV, the Q8 is smaller, narrower and shorter than the more affordable Q7. It is also a 5-seater, unlike the Q7, which seats 7. Available only with a 3-litre petrol engine that generates 340hp and 500Nm of torque propelling the car from 0-100kmph in 5.9 seconds, it also gets a 48V mild hybrid technology. It is being imported as a completely built unit (CBU) from Germany and Audi said only 200 units will be on offer for India this year.

"With the launch of the Audi Q8, we are targeting individuals who want their car to match their personality. Each Audi Q8 will be made-to-order, available with a plethora of customisation options to choose from; we want every Q8 in the country to look different, from the outside and the inside," said Balbir Singh Dhillon, Head of Audi India. "We are entering a new segment with the Q8 but the guiding principles remain the same - bold design, cutting edge technology and exciting performance. The 3.0L TFSI engine with 48V mild-hybrid technology, progressive steering and air suspension make every drive in the Q8 memorable."

The slowdown in the overall Indian economy in general with GDP growth projections sliding to just 5 per cent for 2019-20, and in the domestic passenger vehicle market in particular where sales have declined in double digits this fiscal so far, has impacted the luxury car segment as well. Industry volumes are estimated to have declined by over 13 per cent, the steepest ever in a year and for the first time since 2016 when sales had declined by nearly 8 per cent. Volumes have remained range bound in the 35,000-40,000 unit per annum band since 2015 and is significantly lower than earlier projections of about 100,000 units by 2020.

ALSO READ:Mercedes maintains the top spot in luxury car segment for 5th year in a row

The three big German brands - Mercedes, BMW and Audi - suffered heavy declines last year. Mercedes, the country's largest luxury carmaker, saw its sales skid by 11.3 per cent, the steepest ever in a year in well over a decade. BMW managed to sell about 9,641 units in 2019, a 13.2 per cent decline over 11,105 units of 2018 while Audi registered its third consecutive annual decline as sales crashed 29 per cent at 4,594 units in 2019. For the Volkswagen group's Ingolstadt-based luxury carmaker, this was a significant climbdown from its performance in India between 2012-15 when it had emerged as the leader of the pack and was the first to top sales of 10,000 units in a year.

Dhillon said Audi has set in motion a new growth plan under strategy 2025 designed to arrest the decline in sales and break new ground with consumers in India.

"We have set out very clear goals for ourselves in the next few years under Strategy 2025. 2020 is an extremely important year for us as we launch our new BSVI product portfolio. The Q8 is part of our strategy to strengthen Audi's presence in the country under the goals of Strategy 2025. C and D segments are key focus areas for us in defining this strategy. The Q8 will help us gain a stronger hold in the D segment market and will be our brand shaper in the days to come."

ALSO READ:Audi to cut up to 9,500 jobs in 6 years to fund shift to electric vehicles