The lure for people to use Jan Dhan Yojana accounts is the attached benefits, which includes no requirement to maintain any minimum balance, a RuPay debit card with overdraft of Rs 10,000 and accident insurance 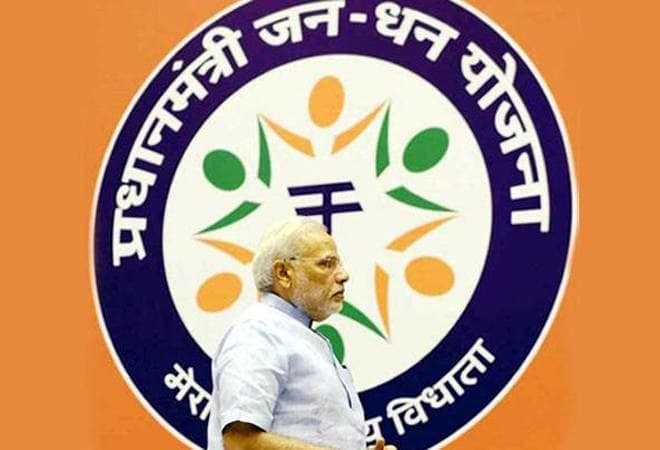 Among other things, Direct Benefit Transfer by the government of different subsidies has also kept Jan Dhan accounts alive

Call it a little nudge from the government to public sector banks or some financial discipline on the part of poor people, the zero balance and dormant accounts under Prime Minister Narendra Modi's ambitious Pradhan Mantri Jan Dhan Yojana (PMJDY) are on a steady decline since its launch five years ago.

A zero balance account means an account with nil balance on the reporting day. Similarly, a dormant market or inactive account  is one where no transaction has taken place over the last one year.

Many suggest that the lure for people to use bank accounts is benefits attached to the PMJDY, which includes no requirement to maintain any minimum balance. In addition, a PMJDY account also provides a RuPay debit card with an overdraft facility of Rs 10,000. There is also an inbuilt accident insurance cover of Rs 2 lakh in the RuPay card.

According to the available information, banks have settled close to 6,000 claims of accidental insurance until November this year.

The Direct Benefit Transfer (DBT) by the government of different subsidies has also kept alive PMJDY accounts. According to an estimate, over 7.5 crore accounts are already receiving DBT under various schemes. The demonetisation exercise in 2016, though failed in achieving larger objectives of recovering the black money, has helped in opening accounts in semi-urban and rural areas.

In fact, there were reports that PSBs are forced to keep Rs 1 in PMJDY to show lower zero balance and dormant accounts, but there are no hard proof to substantiate  it.

Clearly, the PMJDY is helping in achieving the objective of financial inclusion. That shows in many other parameters. Take, for instance, the average deposit balance under PMJDY has more than doubled since the launch of the scheme.

The five-year-old scheme, a pet project of the Prime Minister Narendra Modi, has seen a gradual increase in the average deposit per account from Rs 1,000 in March 2015 to Rs 2,853 in October 2019.

Surprisingly, there has been a consistent rise in the PMJDY account balances despite a slowdown in rural consumption  and falling rural income.

So far the banks have opened 37.11 crore accounts with outstanding deposits of Rs 1.06 lakh crore.

The PMJDY is clearly contributing to financial inclusion drive while decades of commercial banking hasn't been able to address the issue. The scheme is also supported by other policy measures such as differentiated banking licences such as payments banks and small finance banks.  There are already over dozen such banks operational in the market. Similarly, the RBI has also given two full-scale banking licences with a clear cut objective of reaching out to the under-banked and under-served areas. The Kolkata-based micro-finance institution Bandhan Bank and infrastructure institution IDFC secured the banking licences because of the fact that they were reaching out to the bottom of the pyramid.