The order suspends and limits the entry of 'aliens' into  the US, to those who are outside the country and also those seeking visas at the time of the order being passed US President Donald Trump in his latest executive order, a follow-up of the earlier April order intended to protect American jobs, has suspended the entry of several categories of visa holders including H1B and L which most IT firms apply for to send their workforce to the United States. Though the proclamation has a sunset clause at the end of the year (December 31), it also states that the effect of the order may be continued if found to be necessary. The order suspends and limits the entry of 'aliens' into  the US, to those who are outside the country and also those seeking visas at the time of the order being passed.

The Indian IT industry body National Association of Software and Service Companies (NASSCOM) in its statement said that the new proclamation which imposed new conditions for immigration was misguided and harmful to the US economy. "American workers are facing greater challenges than they had in years, but that does not mean that talent shortages do not continue to exist," it stated.

Further, even at the current unemployment rates, an analysis of the Bureau of Labour Statistics' Current Population Survey by the National Foundation for American Progress found that the unemployment rate for computer professionals actually went down from 3 per cent in January 2020 to 2.8 per cent in April 2020.

New York-based immigration attorney, Anand G. Sinha , Founder & Principal Attorney at Anand Sinha Law, P.C says the biggest concern for IT companies is not whether they could hire or retain talent, but to find the right talent in the US. "It takes time to grow homegrown talent," he says. While the Indian IT firms have been making steady investments in localisation efforts, over the past two years the increased H-1B rejections, local hiring, higher sub-contracting and lower onsite utilisation have also increased the onsite cost structure.  For companies in the US, however, the worrying factor is not just talent but also the subsequent financial implications that they have to bear for non-availability of the same.

A report by HDFC Securities dated March 18 stated that the rise in H-1B wages in last two years was at 7.8 per cent CAGR due to higher H-1B rejections and shortage of talent trained on newer technologies. According to an analysis by the brokerage, every 1 per cent increase in US cost has -27bps impact on operating margins of IT firms . The report further noted that even though IT firms aim at higher localisation and on-site delivery centres, the H1B applications have shifted to lower cost destinations like Texas, Virginia, Florida, and Connecticut from high cost destinations like California, Washington, New York and New Jersey. 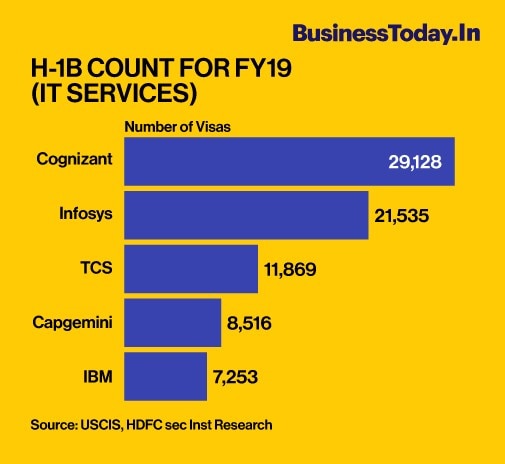 However, with the pandemic bringing huge changes to delivery and sales at IT companies, the uncertainty around travel for this year has already been factored in. A former executive of a Bengaluru-based listed mid-tier IT firm, who did not wish to be named, said that in such unprecedented times when clients are renegotiating prices, cost is of paramount importance . "Whether off-shoring or distributed delivery models, clients now will be more than open to explore all options. It's about getting work done," he said.

H-1B visa ban: Who said what after blow to Indian IT firms?