As we bid adieu to 2019, a tumultuous year for the telecom sector, there is some good news. According to recent data released by the Telecom Regulatory Authority of India (TRAI), after ten months of continuous decline and consolidation in the subscriber base, the telecom industry has added 9.7 million gross subscribers in October to reach 1,183 million subscribers. It also saw an addition of 20.3 million active subscribers after an incessant decline since December 2018, to reach 981.2 million subscribers. 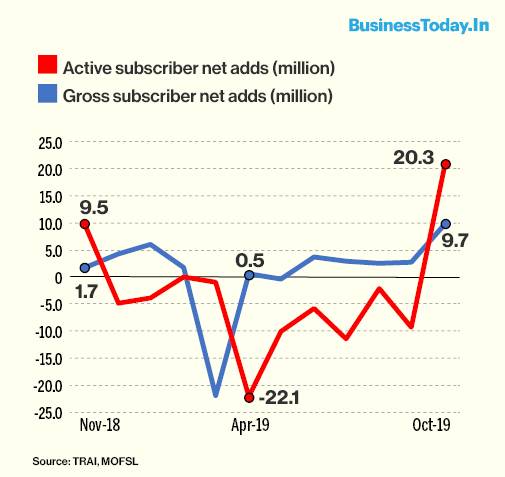 In October 2019, Reliance Jio launched its IUC plans, which supported active/mobile broad-band subscriber run-rate for both Bharti Airtel and Vodafone Idea. However, Reliance Jio's pace of subscriber addition reflects healthy growth. Further, it  announced an IUC plan at the end of October. "Full-month benefit for Bharti or Vodafone Idea should reflect in November 2019," says the MOSL report.

Bharti Airtel, on the other hand, has reversed its declining subscriber trend with 0.1 million gross subscriber adds to reach a total of 326 million subscribers. Its healthy active subscriber base increased by 6.8 million, which indicates the company's focus to improve the quality of its customers, said the report. Further, Bharti has remained at the last position in gross market share (27.5 per cent). It regained its top position in active subscriber market share with 31.5 per cent share, followed by Reliance Jio with 31 per cent share. 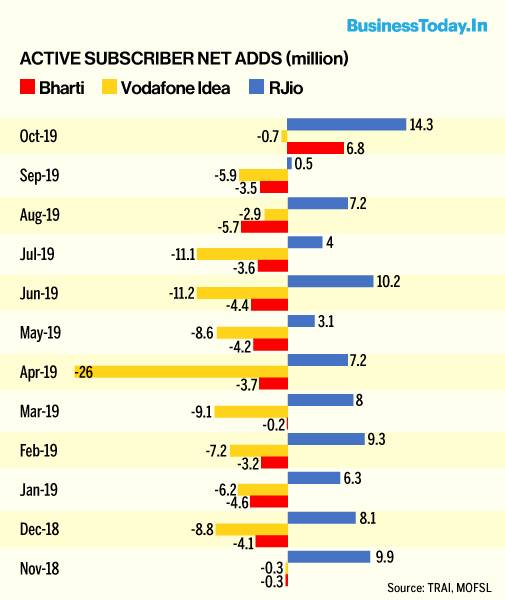 Why China's telecom major Huawei might be on tenterhooks in India

How 350 people with disabilities bagged jobs in skilled roles