Not just the hardware, the Acer Predator Helios 300 and Triton 300 also have a nerdy look to attract gamers. 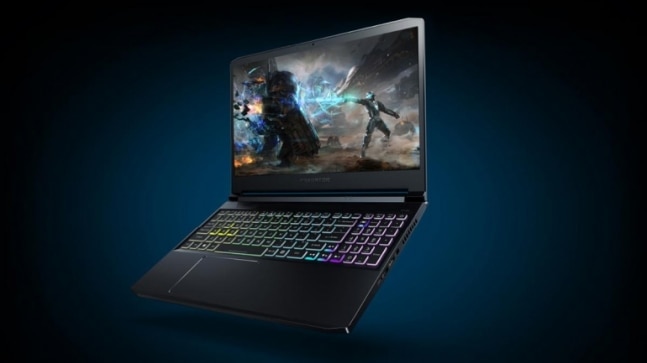 Acer has launched two new laptops in India with gaming-oriented hardware. These are called Predator Helios 300 and Predator Triton 300, and both come with the 10th-generation Intel Core processors. The arrival of Acer's gaming laptop line-up counters the likes of Asus, HP, Dell, and Lenovo that have aggressively launched their high-end gaming laptops in India. Both laptops, however, are not new: they launched in the US back in June.

The Acer Predator Triton 300 is more powerful between the two. It features a 10th-gen Intel Core H-series processor (up to Core i7) along with up to 32GB of RAM and up to 3TB of SSD storage. The graphics on this laptop are handled by a dedicated Nvidia GeForce RTX 2070 engine with the Max-Q design for better performance.

To maintain the temperature on the Acer Predator Triton 300, there is a cooling system consisting of three heat dissipation pipes and a 4th-gen AeroBlade 3D metal fan in one of them. Acer says its CoolBoost technology can provide optimal temperatures when playing intensive games that warm the machine up. Acer has also paid attention to the overall aesthetics of the laptop, which is why you are getting RGB lighting on the keypad and a design that is familiar with gaming laptops. There is a 15.6-inch 1080p IPS display on the Acer Predator Helios 300 with a 240Hz refresh rate. Acer has packed Wi-Fi 6, Bluetooth 5.0, USB 3.2 Gen 1 and Gen 2 ports, and one USB-C port on the laptop. You also have a Killer DoubleShot Pro Ethernet controller on the Predator Helios 300. All of this is backed by a 59Whr battery that is rated to last for about eight to nine hours. There is DTS:X Ultra for better audio too on the laptop. It weighs in at 1.7kg while the thickness of the laptop is 19.9mm.

The Acer Predator Helios 300 also has the same specifications but with some variations here and there. It has also got a 15.6-inch 1080p display with a 240Hz refresh rate. The laptop runs up to a six-core 10th-generation Intel Core H-series processor coupled with 32GB of RAM and 2TB of SSD space. You have a Wi-Fi 6, Killer E26001 Ethernet Controller, Bluetooth 5.0, USB 3.2 Gen 1 and Gen 2 ports, and a USB-C port. The battery is also the same 59Whr one on the Helios 300.