News
TECHNOLOGY
Internet
Spinning out the third web: What is Web 3.0 and why are tech titans bickering over it

Spinning out the third web: What is Web 3.0 and why are tech titans bickering over it

Besides cryptocurrency, metaverse, etc., one of the other keywords for the year was Web 3.0. But what is it exactly and why does it matter?

One of the key criticisms against Web 3.0 is that the decentralisation is going to make the internet difficult to regulate.

One of the main tech topics that have dominated discussions and debates, at least over the second half of the year, is Web 3.0. This term is already polarising enough to witness big names in the tech world sharing their opinions about it on social media and also then getting blocked for it.

It all started with a tweet by ex-Twitter CEO Jack Dorsey, saying, "You don't own 'web3'. The VCs and their LPs do…".

He brought up the big question - who owns Web3.0?

The VCs and their LPs do. It will never escape their incentives. It’s ultimately a centralized entity with a different label.

Know what you’re getting into…

Dorsey's tweet had many Web 3.0  stans jumping in with their arguments, like journalist Mike Davis tweeting to Dorsey that he is "dead wrong" about Web 3.0 and that opinions like these, coming from people of Dorsey's stature is "dangerous" because it was "pre-emptively" stifling the "hopes and dreams of the many brave people shaping a truly independent web3."

And also dangerous because you pre-emptively stifle the hopes and dreams of the many brave people shaping a truly independent web3.

Things, of course, escalated from there as Dorsey clarified that he was just critiquing where things currently stand.

Has anyone seen web3? I can’t find it.

Dorsey mentioning a and z is a dig at a16z (Andreessen Horowitz), a venture capital firm founded by Marc Andreessen which has been one of the most well-known investors for crypto firms and web3 tech startups.

Since then, Dorsey has been blocked on Twitter by Andreessen, leading Dorsey to say:

It seems that Dorsey is not convinced that the truly decentralised concept Web 3.0 is trying to propagate is actually happening, and said that investments and venture capital firms have ruined it.

It doesn't make Dorsey a non-believer. He does believe that any truly decentralised tech needs to be fully independent, as he told Chris Dixon, a general partner at a16z, in a Twitter exchange.

Also Read: Someone just spent $2.5 million on virtual land in the metaverse

"I believe in you and your ability to understand systems. It's critical we focus our energy on truly secure and resilient technologies owned by the mass of people, not individuals or institutions. Only that foundation will provide for the applications you allude to," Dorsey tweeted.

I believe in you and your ability to understand systems. It’s critical we focus our energy on truly secure and resilient technologies owned by the mass of people, not individuals or institutions. Only that foundation will provide for the applications you allude to. 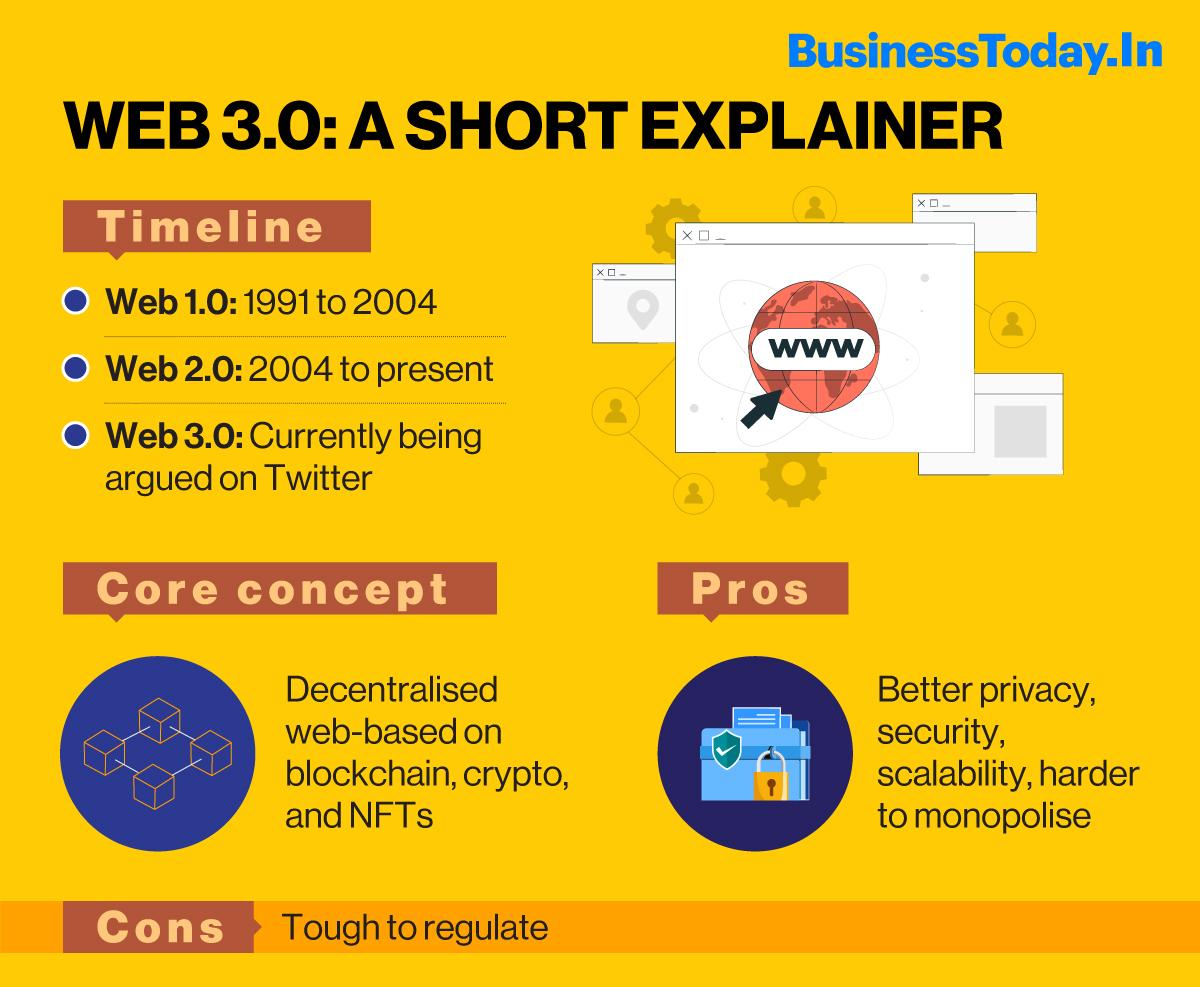 Dorsey has argued that regular users are not the owners of Web 3.0 projects, and venture capitalists, and investors, are. He also does not see this dynamic changing and anticipates that there is going to be a centralised capital pool that is going to back crypto projects, and Web 3.0, which is going to maintain quite a lot of control on the situation, thanks to "venture incentives". Ergo, not really "decentralised".

The Twitter co-founder's core argument is that all the leading Web 3.0 corporations are owned by venture capitalists, who will be making all the money. As TechCrunch pointed out, this complaint is possibly true.

Venture capitalists have reportedly invested more than $6 billion into crypto projects just in Q3 2021. This gives an idea about the scale of the crypto world that is being "purchased by traditional, private market investors" thus making the whole business more centralised than it is being made out to be.

Venture capitalists are investing heavily in Web 3.0 because they think it is going to make them money, which in turn does lead to "a lot of centralisation".

So, it appears that Web 3.0 advocates are ok with using external funds (from venture capitalists and investors), or centralised funds, to power new token-based projects for the decentralised future they imagine.

That dichotomy is what Dorsey summed up in his tweet.

Before we argue about whether Web 3.0 is really centralised or decentralised, we need to understand what it is.

In short, web3 or web 3.0 is the third generation of the Internet. What started as just a bunch of connected computers, evolved to the 'world wide web', and in its third iteration, it hopes to take advantage of all of the world's devices.

As a concept, web3 is not new. It's built on the concept of edge computing and uses platforms built on top of blockchain, cryptocurrency, NFTs (non-fungible tokens), and other technologies.

Edge computing allows companies to bring computing as close to the user's device, or another end-point, as possible. This in turn allows new use cases, like self-driving cars that have to make split second decisions about road traffic conditions.

Conceptually, it incorporates "decentralisation" at its core and is in many ways the opposite of Web 2.0, which has data and content centralised through servers and data centres - collectively referred to as the cloud.

A small group of companies, referred to as 'Big Tech' (the Googles, Facebooks, Twitters, Microsofts, etc.) have virtually monopolised this Internet and its various sectors.

The term Web 3.0 was created in 2014 by Gavin Wood, Ethereum's co-founder, though John Markoff of the New York Times is also credited for coining the term in 2006 at times.

Web 1.0 covers a time that is roughly between 1991 and 2004 when internet users were mostly just consumers and not content creators. The second phase - Web 2.0 - began in 2004 when users started creating and uploading content online and started treating the web as a 'platform' for their content. We are still on Web 2.0, and Web 3.0 is currently just a concept.

This concept revolves around decentralisation with the incorporation of blockchain technologies in the process, like cryptocurrencies and NFTs.

There are concepts like DAOs (decentralised autonomous organisations) and DeFi (decentralised finance) that are also a part of the bigger Web 3.0 idea.

Conceptually, Web 3.0 sounds like a good idea but it is not without issues. Many have called Web 3.0 a solution to Big Tech supremacy, by improving privacy, data security and simplifying scalability.

The emphasis on decentralisation makes web 3.0 difficult to monopolise, at least on paper. While Big Tech firms, including Google, Facebook and more have been able to gain control over the Internet due to their deep integration over the data ecosystem, the philosophy behind Web 3.0 is that no single party should have ownership of data.

Since the required computing power comes off the edge, the theory is that people, not corporations, will control the data. This data is also going to be stored in a decentralised manner, the way platforms like Filecoin already do. This gives many hope that instances like Cambridge Analytics — Facebook’s big election debacle — won’t happen as easily.

And there are plenty of takers already. A The New York Times report says that investors have already bet $27 billion on Web 3.0 to be the “future of the Internet”.

Since most things on Web 3.0 will be on blockchains, surely, it is more secure. All exchanges will be in crypto, making the process largely tamper-proof and transparent, at least partially, NFTs will have its role to play with users’ ownership in this universe where everything is expected to function in a metaverse.

Some companies like Reddit and Discord have explored incorporating Web 3.0 tech on their platforms already. Discord pulled back after facing heavy backlash from users.

One of the key criticisms against Web 3.0 is that the decentralisation is going to make the Internet difficult to regulate. Which, in turn, will make it more difficult to prevent cybercrimes, hate speech, online harassment, the spread of child abuse images and everything else that plagues the cyberspace today.

On the other hand, the idea of a decentralised web represents ‘cyber-libertarian’ views and hopes of the past that the Internet can empower ordinary people by breaking down existing power structures”. Many see it as the web coming full circle.

Critics have also called Web 3.0 a part of the cryptocurrency bubble, an extension of blockchain-based trends that are “overhyped” and “harmful”. Others have raised concerns about the environmental impact of cryptocurrencies and NFTs.

We have to wait to see what happens when we finally do step over to the other side. But Web 3.0 is coming, that much is for certain. Facebook’s rebranding to Meta and Microsoft’s Satya Nadella’s emphasis on the metaverse are big indicators of that.

And this brings us back to the question Dorsey posed -- who owns Web 3.0? The ownership of Web 3.0 seems to be lying with venture capitalists and big tech firms as Dorsey alleges or with no one at all, as Web 3.0 supporters want to believe. If the ownership of a concept that is yet to come to fruition is already so nebulous, what are the odds of it actually being able to offer a free, decentralised Internet as it promises and solve all the issues today’s Internet has? Or is this just another idea that might blow up in our faces, making things worse than they are?