Apple iPhone X allegedly exploded inside the pant's pocket a man was wearing causing him burns. 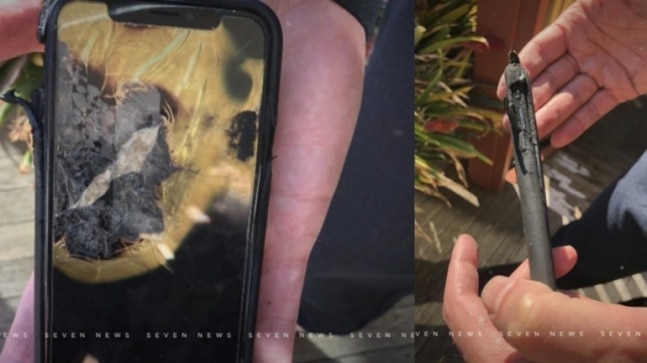 An iPhone user based in Australia is suing Apple over the allegations that his iPhone X exploded in his pocket, seeking damages. The man claims that the iPhone X began to warm, causing pain in his leg, followed by a fizzing sound that hinted to him the phone had exploded. He has alleged that the explosion caused him second-degree burns, for which he is now demanding compensation from Apple. The incident is said to have taken place back in 2019. Apple has responded to the allegations made by the Australian man.

As reported by 7News.com, a scientist named Robert De Rose was sitting in his office when the iPhone X exploded in his pocket. Before the explosion, the device began to cause pain in his right leg. "I heard a faint pop sound, followed by a fizz and then I felt intense pain on my right leg, so I immediately jumped up and realised it was my phone," De Rose was quoted as saying in the report by the Australian publication.

The man found iPhone X emitting black smoke when he took it out of the pocket. But by the time he did that, the explosion, he alleged, caused burns. "I had ash everywhere, and my skin had peeled back," he said. The iPhone X was a little over a year old, according to De Rose's statements.

De Rose claimed that he contacted Apple and reported the incident but received no response. This is when he decided to file a lawsuit against the iPhone maker in Australia, seeking damages. Since the incident came as a shock to the scientist, he decided to warn other iPhone users about the dangers they might encounter.

Meanwhile, there has another incident cropped up that puts a question mark on the safety of Apple devices. Tony Carbone who works at the law firm Carbone Lawyers' in Melbourne told the publication that he had come to know about another person in Melbourne who suffered burns in his wrist due to the overheating of the Apple Watch. The details about this incident are scarce but it seems Apple will have to claim the responsibility.

An Apple spokesperson told the publication that it takes customer safety "extremely seriously" and that the two incidents are being investigated. Both the lawsuits are said to have been filed with the Country Court while Apple is said to be preparing a defence.

Apple has touted that its products are among the safest devices that you can buy in the market right now. The iPhone and other Apple products are among the priciest in their respective categories, which is why it is natural people would expect the hardware to be robust and not prone to dangers such as an explosion. Previously, an iPhone X was reported to have exploded during the software update process in Washington, the US back in 2018 while an iPhone XS Max allegedly caught fire while inside the pocket of its user in Ohio, the US the same year.

It has been found that ageing batteries are mostly a culprit in such incidents. Apple used to slow down the iPhone units with old batteries because of the software getting upgraded each year, a practice that landed it in one of the biggest controversies in the company's history. Not only did Apple CEO Tim Cook issue a public apology, but the company also has to make free repairs and replacements of impacted users. Apple later rolled out a big software update to tweak how battery power management is handled by the iPhone, in addition to informing iPhone users about the battery health in the Settings.