With iOS 15, Apple is bringing new features to the video conferencing app FaceTime which includes improved video and audio. Facetime will be accessible on Windows and Android devices via web browser 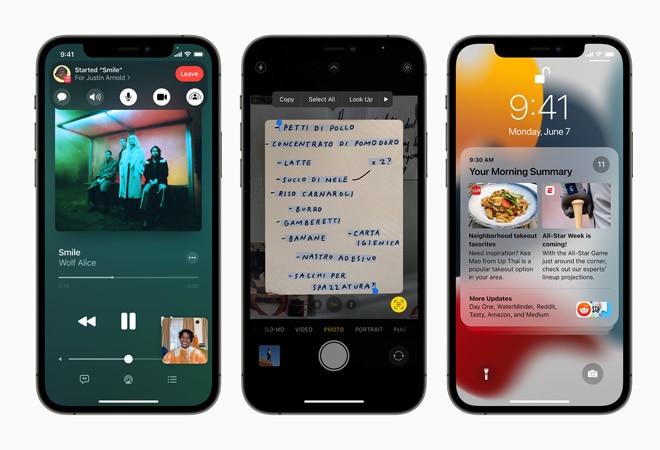 Giving a preview of the new iOS updates coming this fall, Apple unveiled iOS 15 at WWDC virtual keynote. Starting with Facetime, the iOS 15 brings in some changes to notifications too.

With iOS 15, Apple is bringing new features to the video conferencing app FaceTime which includes improved video and audio. Facetime will be accessible on Windows and Android devices via web browser. It also gets Apple's spatial audio along with features such as voice isolation to reduce background noise. Learning from the portrait images on iPhone, Apple has introduced Portrait mode for Facetime that blurs backgrounds within the video call. FaceTime will also support sharing music, video and screen within the call.

Notifications will be summarised using on-device intelligence depending on user patterns, and can be delivered collectively at a set time. In addition is the Focus mode that will allow users to customise the relevant notifications that should appear during different activities, like while working. Focus suggestions are based on users' context, like during their work hours or while they're winding down for bed, and when Focus is set on one Apple device, it automatically applies to their other Apple devices.

In addition, Do Not Disturb will now let others know your status through the Messages app. It will even let them bypass the DND and ping you in case of an important interaction. Other features include Live Text that uses on-device intelligence to recognise text in a photo and allow users to take action. For instance, users will be able to search for and locate the picture of a handwritten family recipe or capture a phone number from a storefront with the option to place a call. With iOS 15, Spotlight will also use intelligence to search photos by location, people, scenes, or objects, and using Live Text, Spotlight can find text and handwriting in photos. The Spotlight will offer web image search and results for actors, musicians, TV shows, and movies. Enhanced results for contacts show recent conversations, shared photos, and even their location if shared through Find My.

Photos have received an update with a new look, interactive interface, and integration with Apple Music.

iOS 15 brings in more privacy controls. With on-device speech recognition, audio of Siri requests is now processed entirely on iPhone by default. Mail Privacy Protection stops senders from learning whether an email has been opened, and hides IP addresses so senders can't learn a user's location or use it to build a profile on them. App Privacy Report will offer an overview of how apps use the access that has been granted to location, photos, camera, microphone, and contacts in the last seven days, and which other domains are contacted. Translate gets a new Live Translate feature that makes conversation flow naturally across languages. Systemwide translation allows users to translate text anywhere on iPhone.

Find My also introduces new capabilities to help locate a device that has been turned off or erased, as well as live-streaming locations for family and friends who choose to share their location. Separation Alerts will notify a user if they leave an AirTag, Apple device, or Find My network accessory behind in an unfamiliar location. The Find My network now supports AirPods Pro and AirPods Max.

Also read: Want to avoid your ex on Tinder? Now you can!