The TV will come to India after the company launched the Realme TV earlier in the year. The TV comes in 32-inch and 43-inch variants. 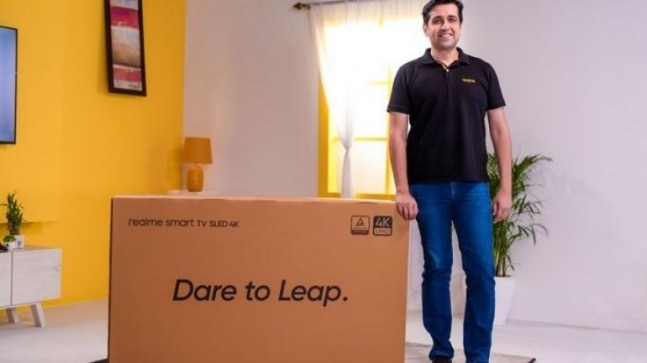 We've been hearing about Realme launching a new TV for a while now, and now we have some information from the company itself about the product. The company's CEO Madhav Sheth has suggested that Realme could be set to launch a new 55-inch 4K TV in India very soon.

Taking to Twitter, Sheth shared an image in which he is standing with a fully packaged Realme TV. Interestingly, the box shows the 4K TV to come with an SLED screen. As per an IANS report, this SLED display technology has been co-developed by Realme and John Rooymans, chief scientist of SPD Technology (Spectral Power Distribution).

I have some interesting updates about our upcoming launch for you all & I am sure it will make your lives much cooler with the most stunning visuals ever. Stay tuned for the next #AskMadhav episode. pic.twitter.com/m7RPky3PSZ

While the company hasn't revealed any information about the TV yet, IANS in a report has claimed that the TV could be launched as the company's first 55-inch smart TV in the first half of October. As per the report, the TV will use an eye-friendly SLED panel with a super ultra-wide colour gamut and low blue light. The TV is also said to bring with itself support for Dolby Audio to offer a stereo surround sound effect.

To remind our readers, Realme had launched its first smart TVs in India earlier in the year. The Realme TV comes in two sizes - the 32-inch version is priced at Rs 12,999 while the 43-inch variant costs Rs 21,999. Available for purchase via Flipkart and Realme's website, the Realme TV comes with a free six-month YouTube Premium membership on the purchase. Realme is giving a one-year warranty on the television and a one-year additional warranty on the panel. There is a 48-hour home installation available free of charge, as well.

The Realme TV comes with an LED display panel. The 32-inch panel has a resolution of 1366x768 while the 43-inch version has a resolution of 1920x1080 pixels. The Realme TV is powered by Android TV without any customisations, which means there is a stock Android experience on the television along with the ability to download supported apps from the Google Play Store. Google Assistant is also supported on Realme TV. The smart TV comes preloaded with Netflix and Amazon Prime Video apps, as well.