4 reasons why MGNREGA is not benefitting workers

On Labour Day 2016, many workers in Jharkhand returned Rs 5 (that year's wage rate hike) to the Prime Minister. The next year on Labour Day workers returned Rupee 1 to the PM. This was done to protest against the meagre hike in the wage rate. In 2018-19, there has been no increment in wage rates in 10 states. The primary objective of MGNREGA was to enhance livelihood security in rural areas along with creating of durable assets such as building roads and canals. The scheme was ranked as the world's largest public works programme by the World Bank in 2015. The scheme provides a social security net for 15 per cent of our country's population.

But on the ground level MGNREGA is not performing as expected. The promise of 100 days of employment is far from reality. The scheme's under performance can be attributed to insufficient fund allocation, consistent late payment of wages, low wage rates and corruption.

Under Mahatma Gandhi National Rural Employment Guarantee Act (MGNREGA), at least 100 days of guaranteed wage employment in a fiscal is provided to any rural household whose adult members volunteer to do unskilled manual work on demand.

Even though the scheme aims at providing 100 days of guaranteed employment, below 50 days of employment was actually provided on an average at an all-India level in FY 18. None of the states were able to provide full 100 days employment as mentioned in the scheme, as per extracts from the latest RBI annual report. 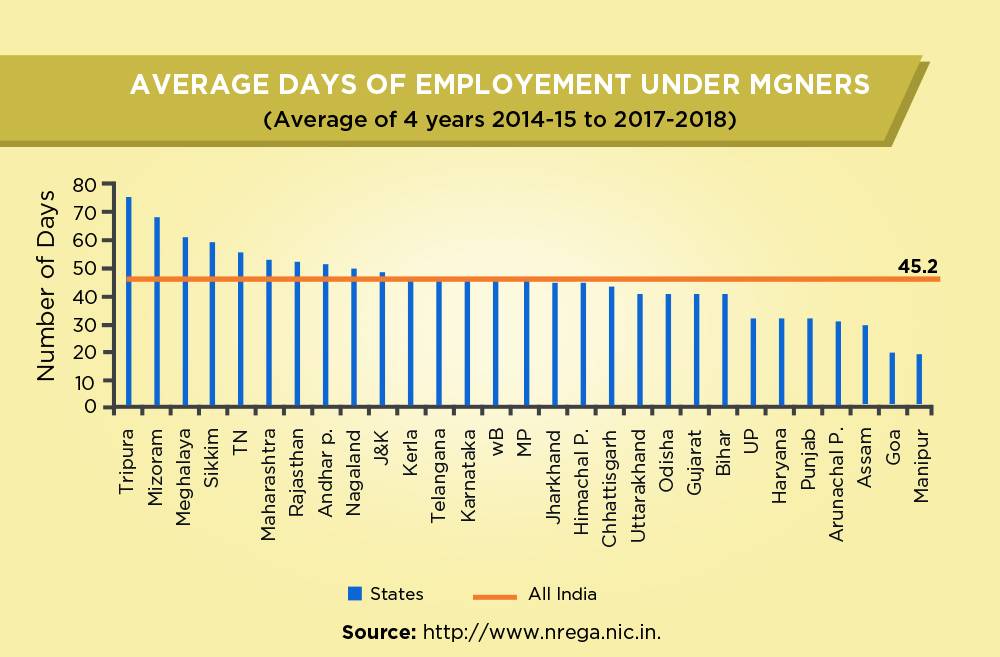 Budget allocation over the years has been insufficient. The fund that centre allocates during the budget proves to be inadequate and more funds are sought by the rural development ministry to finance MGNREGA. This results in delay in payments which adversely affects workers.

A study by Azim Premji University has found that 78 per cent of payments were not made on time, and as many as 45 per cent payments did not include compensation for delayed payment as per guidelines which is 0.05 per cent per day of the wages earned.

In FY17 alone Rs 11,000 crore of wages remained unpaid to workers. Only 32 per cent of the payments in the first two quarters of FY17-18 were made on time.

An RTI filed by activist Dinesh Chadha revealed that about 13.17 crore people were registered under the MGNREGA in FY18, Out of these 5.73 crore workers sought work. Only 5.11 crore people were given work under the MGNREGA and only 29.60 lakh workers got full 100 day employment. The reply from the ministry also disclosed that unemployment allowance was paid only to 217 workers during the year.

Late wage payments to workers is a big disappointment as most of these workers are landless agricultural labourers and they depend on schemes like MGNREGA for their survival. Moreover late payment to existing workers discourages other labourers to work for MGNREGA.

On Labour Day 2016, many workers in Jharkhand returned Rs 5 (that year's wage rate hike) to the Prime Minister. The next year on Labour Day workers returned Rupee 1 to the PM. This was done to protest against the meagre hike in the wage rate. In 2018-19, there has been no increment in wage rates in 10 states - Arunachal Pradesh, Bihar, Jharkhand, Mizoram, Nagaland, Rajasthan, Sikkim, Tripura, Uttar Pradesh and Uttarakhand. The wages provided under MGNREGA was below the minimum agricultural wage in 28 out of 36 states and UTs.

In 2012, a scam was uncovered in Karnataka where 10 lakh fake job cards were detected, which resulted in Rs 600 crore losses to the exchequer.

In 2018, Rural Development and Panchayath Raj (RDPR) report pointed out that in just one financial year FY18, 596 cases were registered against officials and non-officials for violation of rules and guidelines. Criminal cases were filed against 85 individuals (middlemen) while 306 government officials were suspended from service, 3 lost their job in Karnataka.