Tejasvi Surya today won by a huge margin of 3,31,192 votes against Congress's B K Hariprasad and will take oath as the youngest member of the party in the Lok Sabha 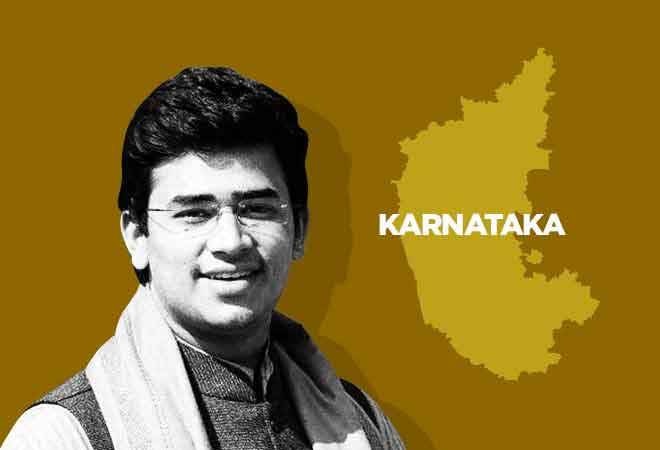 When 28-year old Tejasvi Surya got a call from his party president to contest from the prestigious Bangalore South Constituency, he took to Twitter in the wee hours of March 26, to talk about his candidature and thank Prime Minister Narendra Modi.

Tejasvi Surya today won by a huge margin of 3,31,192 votes against Congress's B K Hariprasad and will take oath as the youngest member of the party in the Lok Sabha.

Bengaluru South seat has been a BJP bastion since the 90s and the late Union Minister Ananth Kumar held the seat for six terms. Kumar contested against tech czar and co-founder of Infosys Nandan Nilekani in 2014 and won by a margin of over 2.3 lakh votes.

Interestingly, this time around the party waited until the very last moment to announce its candidate for the seat. While the wife of the last minister Tejawini Ananth Kumar was touted to be the heir apparent, Tejasvi's candidature came in as a surprise to even their own party members, who had already begun soft campaigning for her. After overcoming the initial dissent from Ananth Kumar confidants, RSS-backed Tejasvi's election campaign largely resonated with a strong Hindutva ideology in a non-issue based campaigning.

Professor of Sociology at Azim Premji University calls his win incidental in an election, which BJP rode on a 'Modi Wave'.

"This sort of a sweep in Karnataka in some places could be due to coalition workers (JDS-Congress) not working finely enough. But even in areas, where they worked absolutely brilliantly such as in constituencies like Bangalore North, the coalition has lost and something larger has worked. This is not about the individual Tejasvi Surya at all," he says.

Would it come as a surprise if he is inducted into the cabinet as a junior minister? "They may take chances," he adds.

A young law graduate, Surya's association with RSS and ABVP, the student wing of BJP, started as early as his student days, much like his predecessor Ananth Kumar. After becoming a designated spokesperson of the party in Karnataka, Tejasvi was a popular face on TV political debates and played a big role in grooming and making the party visible in the state.