SBI FD rates: While deposits of 7 days to 45 days will now earn 75 basis points (bps) less, most of the tenures have seen rates dip by 10-20 bps. The smallest rate cut of 5 bps will apply on the 2-year to less than 3-year tenure SBI FD rates: The State Bank of India, the country's largest lender, has just slashed interest rates on its fixed deposits (FDs) of less than Rs 2 crore, or retail deposits, as well as the larger deposits across nearly all tenures offered. While deposits of 7 days to 45 days will now earn 75 basis points (bps) less, most of the tenures have seen rates dip by 10-20 bps. The smallest rate cut of 5 bps will apply on the 2-year to less than 3-year tenure. The new interest rates on SBI FDs will come into effect from August 1. 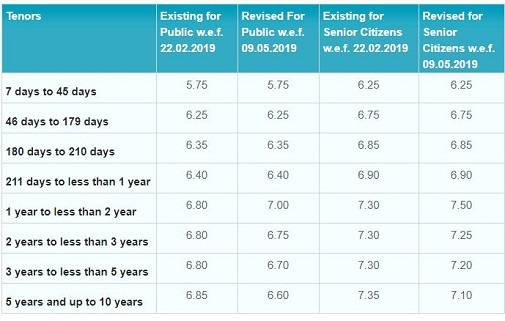 Bulk deposits, that is amounts of over Rs 2 crore, used to earn a marginally higher interest rate than retail deposits for the longer maturity periods, but now they are at par. In fact, bulk deposits of 1 year to less than 2 years tenure, the only bucket to remain unchanged, will now earn 10 bps less than smaller deposits of the same tenure. The last time the bulk deposit rates were tweaked was in February.