Gully Boy the much-awaited movie by Zoya Akhtar, starring Ranveer Singh and Alia Bhatt in the lead has been released on 4,101 screens worldwide, including 3,350 screens alone in India. 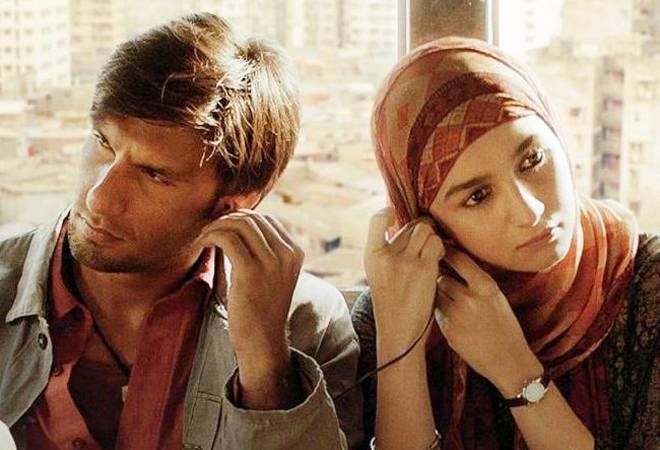 Gully Boy the much-awaited movie by Zoya Akhtar, starring Ranveer Singh and Alia Bhatt in the lead has hit the theatres on Valentine's Day. This musical drama is loosely based on the life of street rappers Divine and Naezy. Gully Boy has been released on 4,101 screens worldwide, including 3,350 screens alone in India, as mentioned by Bollywood critic and business analyst Taran Adarsh.

Depicts the struggles of an underdog brilliantly... Zoya Akhtar's best film to date... Ranveer is phenomenal... Alia is electrifying... Siddhant Chaturvedi is super... Not to be missed! #GullyBoyReviewpic.twitter.com/f6phWdsb7Q

Review: The movie has been garnering praises from critics. Taran Adarsh has given four stars to Gully Boy and has said that it is the best movie by Zoya Akhtar till date. BusinessToday.In review gave Gully Boy 4 out of 5 stars and said, "Akhtar and Kagti have made a film for years to come. It does not only shed light on the underground rap scene, but also highlights the stark difference in lifestyle of the rich, middle class and the poor."

News: At the Berlin Film Festival, Gully Boy received thunderous applause and according to BoxofficeIndia.com the film has a potential of becoming one of the greatest hits in the recent time.

The film may have received applauses at Berlin but the CBFC Board was bothered with the 13-second-long Ranveer-Alia kissing scene and therefore, just before the release date in India,the censor board asked the makers of the movie to alter it.

Movie Buzz: Gully Boy has received great support from Bollywood. Here's how these celebs has shower their lover for the movie:

Kubbra Sait of Sacred Games famed, who is also part of the film, lauded Ranveer Singh's performance in the movie.

#GullyBoy is magic and making that superior on every count is @ankurtewari You're loved.

Karan Johar called Zoya Akhtar the star of Gully Boy and expressed his joy over unanimous appreciation the movie has received.

I am so excited and elated to hear #gullyboy is being loved unanimously by everyone at screenings!!!! Zoya is a STAR!! A gold star filmmaker and word on the street is that the performances are exceptional! Can't wait to see it @RanveerOfficial@aliaa08@ritesh_sid@FarOutAkhtar

Box office predictions: As per the reports of boxofficeindia.com Gully Boy has got a massive opening of 40-55% in first day second show. It is likely Gully Boy will earn in between Rs 7 crore and 8 crore in it's opening day.

Songs:  Despite being a musical drama movie, Gully Boy's music is not composed by any mainstream musical  director. However, with beatboxing and raps in the soundtrack, Gully Boy album has become the new favourite, especially among the youth. The film's soundtrack consists of 18 songs in total. Most of the raps are sung by Ranveer Singh, besides, Jasleen Royal, DIVINE, Dub Sharma, Ace, MC Altaf, Ishq Bector, MC TodFod, Maharya, 100 RBH, Noxious D.

Moreover, with Gully Boy's widely popular music, the film has revived the rap culture across the country.

Trailer: The buzz for Gully Boy started when Zoya Akhtar launched the film's trailer on January 9 and since then it has received over 49 million hits. Cast: Ranveer Sigh and Alia Bhatt are playing the lead in Gully Boy. Ranveer Singh is playing the role of an aspiring rapper named Murad Sheikh, Alia Bhatt plays Ranveer Singh's love interest, Safeena Ali, Kalki Koechlin is Sky, Siddhant Chaturvedi is Shrikant, Vijay Raaz is Aftab Sheikh and Vijay Verma plays the role of Moeen.

The film is produced by Zoya Akhtar, Farhan Akhtar and Ritesh Sidhwani under the banners of Excel Entertainment and Tiger Baby.