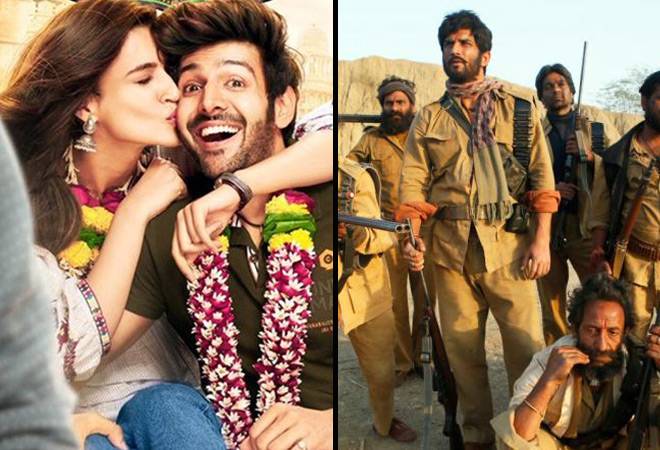 Luka Chuppi vs Sonchiriya at the box office

Luka Chuppi vs Sonchiriya: The coming weekend will see four of Bollywood's young entrants locking horns at the box office. Kartik Aaryan and Kriti Sanon's romantic comedy Luka Chuppi will clash with Sushant Singh Rajput and Bhumi Pednekar's action drama, Sonchiriya. While both the movies will cater to largely different audiences, one is expected to outperform the other. It must also be taken into account that both this movies will clash with Ajay Devgn, Madhuri Dixit and Anil Kapoor juggernaut, Total Dhamaal.

To begin with, Luka Chuppi stars Kartik Aaryan, of Pyar Ka Punchnama fame who delivered one of the biggest hits of 2018 - Sonu Ki Titu Ki Sweety (SKTKS). Aaryan is expected to recreate his magic as he is still riding high on the success of SKTKS. Although Kriti Sanon's 2017 movie, Raabta, sank without a trace, her next movie Bareilly Ki Barfi was appreciated both by the critics and the masses.

Luka Chuppi is produced by Dinesh Vijan, whose last movie Stree was one of the most-loved and acclaimed movie of last year. It had done extremely well at the box office as well. Vijan had also produced Hindi Medium, Badlapur, Finding Fanny, Go Goa Gone and Being Cyrus among others. Even if the movie tanks, it is not likely to go down without making a noise.

On the other hand, there is Sonchiriya that stars Sushant Singh Rajput and Bhumi Pednekar, who cannot seem to do anything wrong when it comes to picking movies. All her movies so far have done well at the box office. It remains to be seen if her winning streak will continue with Sonchiriya.

Set in Chambal, Sonchiriya also features Manoj Vaypayee, Ranveer Shorey and Ashutosh Rana. However, there is not much awareness about Sonchiriya, which might hit its collections.

Factoring all this, Luka Chuppi is likely to collect in the range of Rs 5-7 crore on Day 1, while Sonchiriya might have to settle for around Rs 1.5-2 crore.

Positive word of mouth will help both the movies in the long run in their clash with Total Dhamaal and Gully Boy, both of which are currently ruling the box office.