PM Narendra Modi said that Budget 2018-19 has devoted attention to all sectors, ranging from agriculture to infrastructure to healthcare. 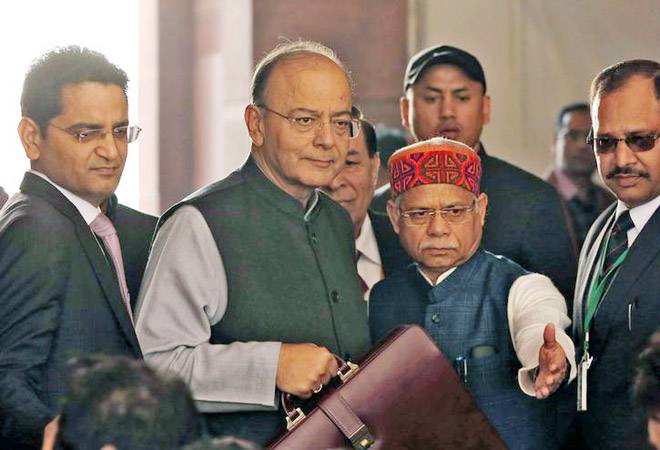 Finance Minister Arun Jaitley (File Photo)
Finance Minister Arun Jaitley delivered his government's last full year Budget speech for financial year 2018-19. He began his speech by highlighting the government's economic reforms undertaken in the last four years and its achievements. Jaitley said that this year's Budget will focus on strengthening agriculture and rural economy and the government was committed to double the farmers income by 2022.

The Finance Minister further said that the government with Niti Aayog will also devise mechanism to ensure that the farmers get the minimum support price. He said that the country has grown on an average of 7.5 per cent in the first three years of the current government and has become a USD 2.5 trillion economy. "We hope to grow at 7.2 to 7.5 per cent in the second half of the current fiscal," he said. Jaitley further said that India has already become 7th largest economy of the world and it is expected to become 5th largest economy soon.

06:27 PM: Lauding the new health insurance scheme floated in the Union Budget 2018, Congress leader Shashi Tharoor also pointed out the shortcomings in the ambitious project, enquiring cheekily 'will it prove another jumla?'

One good thing in #Budget2018 is the health insurance scheme to cover 500 million Indians. But the budget figures show no serious allocation for it, &the Fasal Bima Yojana has already proved a boon for insurance companies more than the insured. Will it prove another #jumla?

06:22 PM: Fraud of MSP only for Kharif i.e. Elections: Cost of production used by govt does not include costs of family labour & land rent, which is the global norm. We reiterate our demand for bringing a law giving farmers the Right to Sell at MSP, says CPI (M) leader Sitaram Yechury.

Fraud of MSP only for Kharif i.e. Elections:
Cost of production used by govt does not include costs of family labour & land rent, which is the global norm. We reiterate our demand for bringing a law giving farmers the Right to Sell at MSP.

04:40 PM: Agriculture and rural economy have been given high priority in New India Budget: Arun Jaitley

04:38 PM: Niti Aayog will devise a mechanism to increase the Minimum Support Price for crops to 1.5 times of production cost, as promised in New India Budget; to be done in consultation with the states: Arun Jaitley

04:35 PM: Step by step, in every budget, I have been putting surplus money in the hands of the middle-class taxpayer: Arun Jaitley

04:30 PM: Contribution of the salaried class has been reognized for the first time: Arun Jaitley

01:40 PM: Ayushman Bharat will help 10 crore families in their medical need. This is the biggest ever government-sponsored health care programme in the world: PM Modi

01:36 PM: I congratulate the Finance Minister for the decision regarding MSP. I am sure it will help farmers tremendously: PM Narendra Modi

01:34 PM: The farmers, Dalits, tribal communities will gain from this Budget. The Budget will bring new opportunities for rural India: PM Narendra Modi

01:30 PM: This budget has devoted attention to all sectors, ranging from agriculture to infrastructure: PM Narendra Modi

What Will Get Expensive

"Not a single extra rupee increased in Delhi's share in Central taxes since 2001-02, stays at Rs 325 crore. No other part of India gets such treatment. BJP government at Center continues to treat Delhi residents as second-grade citizens: Delhi Deputy Chief Minister Manish Sisodia

"Where is the direction? Where will the investment come from? The ambitious health cover programme will go like crop insurance scheme where only insurance companies make money. It's not a budget for common people: Congress spokesperson Pawan Khera

12:45 PM:The government to increase customs duty on mobile phones from 15 per cent to 20 per cent: Arun jaitley

12:40 PM: Existing 3 per cent cess on health and education to be increased to 4 per cent: Arun jaitley

12:10 PM: The government insurance companies will be merged into a single entity, and subsequently listed in the stock exchange, as part of the disinvestment programme: Arun Jaitley

12:05 PM: The government to take all steps to eliminate use of cryptocurrencies which are being used to fund illegitimate transactions. The government   will also explore the use of block-chain technology for ushering in digital economy: Arun Jaitley

11:55 AM: The government will contribute 12 per cent of wages of new employees in EPF for all sectors for the next 3 years : Arun Jaitley

Govt will contribute 12% of wages of new employees in EPF for all sectors for the next 3 years : FM @arunjaitley#Budget2018#NewIndiaBudget#BudgetWithDDNewspic.twitter.com/RP9otSh8nH

11:50 AM: The government to launch 'Revitalising of Infrastructure and Systems in Education' by 2022 with a total investment of Rs 1 lakh crore in next 4 years: Arun Jaitley

11:42 AM: One goverment medical college to be ensured for every 3 parliamentary constituencies by upgrading 24 district-level colleges: Arun Jaitley

11:40 AM: The Government is slowly but steadily progressing towards universal health coverage: Arun Jaitley

11:38 AM: Providing 5 lakh rupees per family per year for medical reimbursement, under National Health Protection Scheme. This will be world's largest health protection scheme: Arun Jaitley

11:35 AM: By 2022, every block with more than 50 per cent ST population and at least 20,000 tribal people will have 'Ekalavya' school at par with Navodaya Vidyalas: Arun Jaitley

11:15 AM: Bamboo is green gold, we have removed the classification of bamboo grown outside the forest areas as trees: Arun Jaitley

11:10 AM: The government should ensure that farmers get minimum support price (MSP) for their production and we in consultation with Niti Aayog will devise a plan to ensure that: Arun Jaitley

11:05 AM:This year's Budget will focus on strengthening agriculture and rural economy. We are committed to double the farmers income by 2022: Arun Jaitley

11:00 AM: Finance Minister Arun Jaitley begins his Budget 2018-19 speech by highlighting the government's economic reforms and its achievements.

9:55 AM:Finance Minister Arun Jaitley arrives in Parliament for Budget presentation. He will begin his Budget speech at 11 AM.

9:40 AM:Finance Minister Arun Jaitley meets President Ram Nath Kovind ahead of his Budget 2018-19 presentation in the Parliament at 11 AM.

9:15 AM: If Dalal Street reports are to be true, Arun Jaitley may impose LTCG tax on equities which will make the investment class less attractive to FIIs, DIIs and retail investors.

9:10 AM: Arun Jaitley's Day Plan: Finance Minister Jaitley will begin his Budget speech in Parliament at 11 AM. He will hold post Budget press conference in evening at 4 PM. The Finance Minister will also hold discussion with Economic Advisory Council at 4:30 PM.

8:59 AM: As per ritual, Finance Minister Jaitley poses with Budget briefcase and heads to Rashtrapati Bahavan to meet President Ram Nath Kovind.

Delhi: Finance minister Arun Jaitley and his team ahead of the #UnionBudget2018 presentation pic.twitter.com/LrECFu4gYP

8:44 AM: Finance Minister Arun Jaitley reaches North Block office and he will deliver his Budget speech in Hindi.

#Visuals from outside Finance Minister Arun Jaitley's residence in Delhi. He will be presenting the Union Budget 2018-19 in the Parliament today. pic.twitter.com/RwRPcTkIHr

7:50 AM: It will be a good budget. It will be for the benefit of the common people: Shiv Pratap Shukla, MoS, Finance

HERE ARE SOME EXPECTATIONS

Small businesses, which have traditionally formed the core support base of the BJP, too may get some sops to ease pain caused to them due to the chaotic rollout of the Goods and Services Tax (GST) and demonetisation.

Fiscal Deficit
Chief Economic Adviser Arvind Subramanian has indicated that the government may be willing to ease off on the strict fiscal deficit target which would provide more headroom for the finance minister. Jaitley had previously set a target to lower the fiscal deficit to 3.2 per cent of GDP in the current fiscal and to 3 per cent in 2018-19 budget to be presented on Tuesday.

GST issue
This will also be the first budget to be presented after the introduction of the new GST regime. As a result the finance minister will have less leverage in changing tax rates since central excise duty on goods and service tax have both been subsumed in the GST and he no longer has the sole power infrato fix rates on them. Another constraint for the finance minister is the increase in international oil prices to around $70 per barrel. The country imports close to 80% of its crude requirement and while high oil prices fuel inflation it also increases the country's trade and current account deficits.

Stocks
The finance minister may also impose a capital gains tax on investments in stocks so that other forms of investments such as fixed deposits in banks turn more attractive.

Corporate Tax
While India Inc. is hoping the finance minister will finally show some movement on his 2015 promise to lower corporate tax rate to 25 per cent from 30 per cent over four years this may not happen given the pro-poor tilt in a pre-poll budget. Scrapping the colonial-era tradition of presenting the Budget at the end of February, Jaitley had for the first time presented it on February 1 last year.

The presentation of the budget was advanced by a month to ensure that proposals take effect from April 1, the beginning of the new financial year. Besides, the nearly century old tradition of having a separate budget for the railways has been dropped. The railway budget now forms a part of the general budget.

This will be the last full-fledged budget by the present Modi government as a vote-on-account or approval for essential government spending for a limited period is taken in the election year and the full budget is presented after the new government is sworn in.