The government has pegged the net tax revenue for the fiscal year 2021 at Rs 16.4 lakh crore, marginally lower than the budgeted estimates of nearly Rs 16.5 lakh crore in FY20. This was the second instance of contraction, albeit lower, in the budgeted estimates of net tax revenues under the Modi government since the year 2014. It declined around 6 per cent to Rs 9,19,814 crore in the first full year budget presented by Narendra Modi-led NDA in 2015-16. The trend may not be very unusual because when Manmohan Singh-led UPA came back to power in 2009, the budget estimates of the net tax revenues went down by 7 per cent to Rs 4.7 lakh crore in 2009-10 compared to Rs 5.1 lakh crore in the previous year. The historical data reveals that there were only four instances of such declines in over three decades. 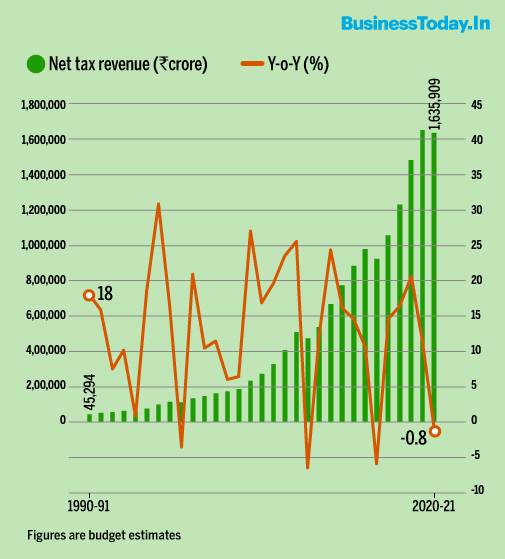 "Recently, government has undertaken very significant tax reforms for boosting investments. However, expected tax buoyancy will take time. In continuation of the reform measures already taken so far, the tax proposals in this budget will introduce further reforms to stimulate growth, simplify tax structure, bring ease of compliance, and reduce litigations," she said.