The Indian automobile industry managed to make a recovery in May 2022 and has registered healthy growth in terms of vehicle sales when compared to the same period last year.

Domestic manufacturers like Maruti Suzuki, Tata Motors, Mahindra, and Kia among others were in the green last month.

The Indian automobile industry managed to make a recovery in May 2022 and has registered healthy growth in terms of vehicle sales when compared to the same period last year. Domestic manufacturers like Maruti Suzuki, Tata Motors, Mahindra, and Kia among others were in the green last month.

Last year, the domestic auto industry was grappling with tough times due to the COVID-19 pandemic’s second wave wreaking havoc on the workforce, carmakers and also on the supply chain. The low buying sentiment among consumers and production disruptions were the main reason behind the low sales.

However, now when the economy seems to be recovering and with production seemingly back on track, several carmakers are reporting year-on-year as well as month-on-month sales growth. 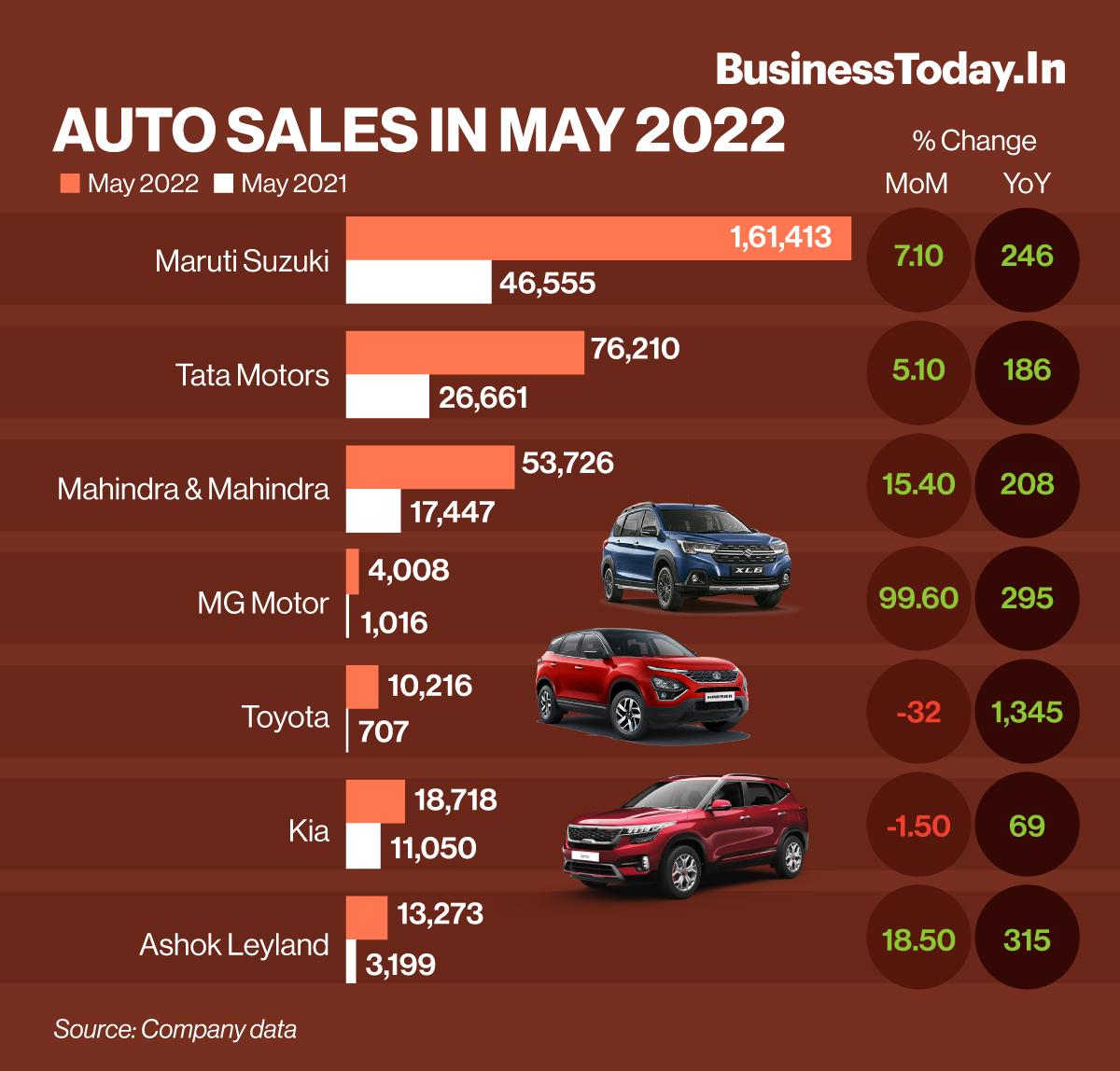 India’s largest car manufacturer Maruti Suzuki India announced that it had sold 161,413 cars in May 2022. Total sales in the month include domestic sales of 128,000 units, sales to other original equipment manufacturers (OEM) of 6,222 units and its highest ever monthly exports of 27,191 units.

Maruti Suzuki, in a regulatory filing, also revealed that sales of its mini cars — Alto and S-Presso— stood at 17,408 units in May 2022 as against 4,760 in the same month last year.

Maruti Suzuki also stated that the shortage of electronic components had a minor impact on the production of its vehicles, mainly on domestic models. The company had also taken all possible measures to minimise the impact, it added.

The sales figures for May 2022 are not comparable with that of May 2021 as the operations in May 2021 were significantly affected due to COVID-19 related disruptions, the company added.

Tata Motors has set many records in May 2022 — by both Tata Motors Passenger Vehicles and Tata Passenger Electric Mobility. In the internal combustion engine (ICE) passenger vehicles segment, the company saw its highest ever monthly sales.

While the Tata Nexon sales continue to make it the country’s No.1 selling SUV, the company also noted the highest monthly sales for the Harrier and Safari.

Mahindra & Mahindra stated that it has recorded an overall auto sale of 53,726 vehicles for May 2022, around 208 per cent growth against the same period last year. The company, in a regulatory filing, stated that in the Utility Vehicles segment, it had sold 26,632 vehicles as against 7,748 units in May 2021, up 244 per cent.

In the commercial vehicles and three-wheelers segment, the automaker sold 24,794 vehicles, including 3,645 three-wheelers (including electric 3Ws), an increase of 230 per cent over May 2021.

MG also stated that the demand for its cars remains strong and coupled with healthy bookings, the automaker expects the growth momentum to continue despite the manufacturing being impacted due to the global pandemic.

MG Motor, which recently saw its car sales cross the 1 lakh mark in the Indian market ever since it began its sales operations back in 2019, its first launch ‘MG Hector’ has been its bestselling model, followed by the MG Astor and MG ZS EV.

Toyota revealed that its sales figures for May 2022 stand at 10,216 units, registering a massive 1345% growth compared to its wholesales in May 2021. Toyota sold 707 units in May last year due to the impact of the second wave of the COVID-19 pandemic.

Moreover, the Japanese carmaker’s cumulative wholesales from January to May 2022 have witnessed a growth of 16% compared to the same period last year.

Kia India sold 18,718 units in May 2022, comfortably registering a year-to-date (YTD) increase of 19 per cent. However, the overall sales of the company decreased in comparison to its sales in April 2022, which stood at 19,019 units, respectively.

Kia's Sonet was the highest contributor to the company's overall sales with 7,899 units of the car being sold in the country, followed by Seltos with 5,953 units, Carens with 4,612 units, and Carnival with 239 units, respectively. Apart from these units, the carmaker also included 15 fully-electric EV models that have been dispatched to its dealerships as display cars.

As the gradual recovery in the semiconductor shortage issue commenced, the firm sold 97,796 units in the first five months of CY2022, an increase of 19 per cent plus YTD. The company is currently the fifth most popular automobile brand in the country. With the May 2022 sales performance, Kia India surpassed the 4.5 lakh domestic sales milestone, while the Sonet reached 1.5 lakh sales for the first time since its launch.