However, India's largest carmaker Maruti Suzuki reported a near 92 percent jump in sales in March 2021 at 146,203 units against just 76,240 units of last year, when the country had gone into a lockdown from March 25. Realising that the numbers are not comparable due to low base effect, the company provided sales figures for March 2019 as a reference point which showed a 0.8 percent growth suggesting that at least for the leader of the pack, volumes have indeed reached pre-pandemic levels.

The sales tally for March 2021, while higher than in 2019 was also not the highest-ever for the month. For passenger vehicles, the peak was in March 2018 when the company had dispatched 147,170 units from its factory gates to the dealers.

In March 2021, the company registered growth across almost all segments. The entry-level mini car segment-- Alto and S Presso, saw a 54.2 percent growth at 24,653 units while the compact vehicle segment which accounts for the lion's share of sales for the company and comprises of bestsellers like Swift, Dzire, Baleno and WagonR, more than doubled with a 103 percent growth at 82,201 units. For the full fiscal both the segments recorded an identical 8.7 percent decline.

Sales in its utility segment portfolio also more than doubled at 26,174 units, a jump of 120 percent. Mirroring the overall trend in the industry where SUVs and MPVs are growing the fastest, this segment was also more resilient in the post lockdown phase. For the full fiscal, it declined by only 2.6 percent at 229,101 units.

Also read: Maruti Suzuki to hike prices from April amid rise in costs

The only segment where the company registered a decline in March was the mid size sedan category where it sells the Ciaz. Sales of the car saw a 12.6 percent dip during the month over last year at 1628 units. For the full fiscal as well, sales of the sedan declined the most at 13,852 units, a 45.2 percent drop over 2019-20.

A comparison of absolute sales volume figures with respect to past years is as follows: 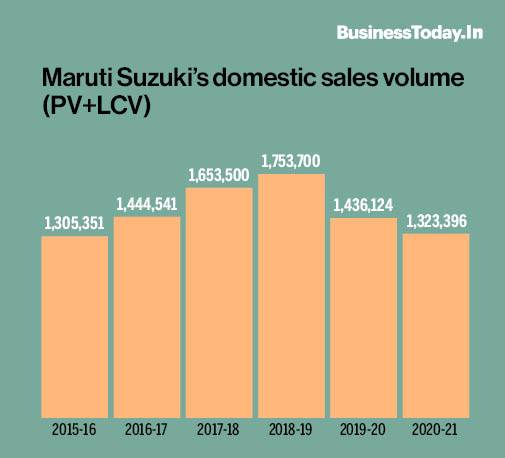