News
Auto
Is Hyundai testing Santro 2018 in India ahead of launch at Auto Expo 2018?

Is Hyundai testing Santro 2018 in India ahead of launch at Auto Expo 2018?

Hyundai seems to be going with its familiar 'tallboy' design, featuring large rear and side windows and more space inside. The body dimensions might also have been increased.

Hyundai has been faring poorly in the Indian budget car segment since withdrawing its Santro from the market back in 2015. The Korean carmakers failed to recreate the popularity of its most popular hatchback with its other budget offering, the Eon. Now, to get a piece of the budget segment pie, Hyundai is going to bring back the Santro back to India in a new avatar. While the 2018 Hyundai Santro is expected to be unveiled during the 2018 Auto Expo in Delhi, a test mule of the car was spotted recently on the Salem-Chennai highway, reports said.

The spy images published by Rushlane.com show a heavily camouflaged back of a small car with a design language similar to that of previous Santro models. The C-pillar, however, seems similar to that on Hyundai i10. The images show wheel caps over steel rims which confirm that it will be a budget car.

Not much could be ascertained about the design language of the 2018 Hyundai Santro from the camouflaged test mule. However, Hyundai seems to be going with its familiar 'tallboy' design, featuring large rear and side windows and more space inside. The body dimensions might also have been increased.

While there is no official confirmation about the motor that will drive the 2018 Hyundai Santro, reports suggest that it will be an 800cc, 1.0-litre petrol engine which is commonly seen on cars in this segment. The smaller engine might be coupled with the segment first full automatic transmission. Hyundai is planning to bring the 2018 Hyundai Santro with an AMT option too. The new Santro is also likely to be loaded on features.

The 2018 Hyundai Santro will be launched in Indian markets during the first half of 2018, as the scheduled unveiling in India is expected to happen at Auto Expo 2018. The price is likely to be between Rs 2.5 lakh and Rs 4.5 lakh. 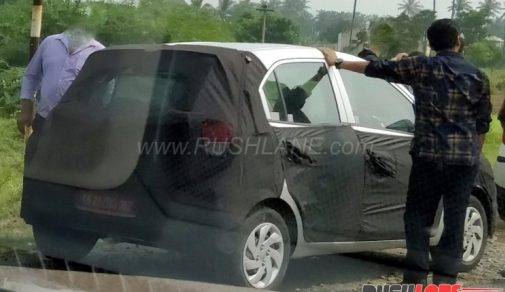 With the budget car segment booming in India, the 2018 Hyundai Santro is expected to come face to face with a lot of competition. The market favourite Maruti Suzuki has longstanding bestsellers like Alto and recent offering like Celerio which could pose a tough challenge for the 2018 Santro. Apart from this are the Renault Kwid, Tata Tiago, Datsun redi-GO, among others.

Once launched, the 2018 Hyundai Santro is likely to be placed between the Hyundai Eon and Hyundai i10. The car could come with a completely new design language. The C-pillar borrowed from Hyundai i10 could be an indication of substantial change in design. Hyundai withdrew Santro from India without any major design refreshes or facelift. There also is a good chance that it might be named Hyundai Atos, after the name this car is sold in global markets with.