The entry level Alto, which has been India's best-selling car in India since 2004-05 when it overtook Maruti 800, has in fact slipped to the fourth spot in the list, its worst position in nearly two decades

Maruti's original premium hatchback Swift has finally ended stablemate Alto's 16 year reign as the best-selling car in the country in 2020-21. With sales of 172,671 units during the fiscal, Swift was comfortably ahead of the rest of the pack despite suffering an over 8 per cent decline in sales against 2019-20 when it was the second largest selling car in the country.

From a monthly sales perspective, Swift was also the first car to overtake Alto way back in May 2012, a feat that has been repeated by it, Dzire and Baleno, multiple times since, but it has taken almost over 8 years for it to do so comprehensively on an annual basis. Part of it is due to the discontinuation of the 1 litre K10 version in 2019 and the launch of a direct rival -- S Presso, which has eaten into its share. More importantly though, it is an indicator of the clear shift in preference among consumers from affordable no frills entry level hatchbacks to more premium and feature rich models. It is a trend that has reinforced itself even in a year ravaged by the pandemic when wallets and disposable incomes have shrunk.

Proof of that can be found in other examples in the list as well. Following Swift, Maruti's latest premium hatchback Baleno emerged as the second largest selling car at 163,445 units ahead of old warhorse Wagon R, which was unsurprisingly resilient at 160,330 units. WagonR was one of the only three cars in the top 10 list to manage an annual growth. 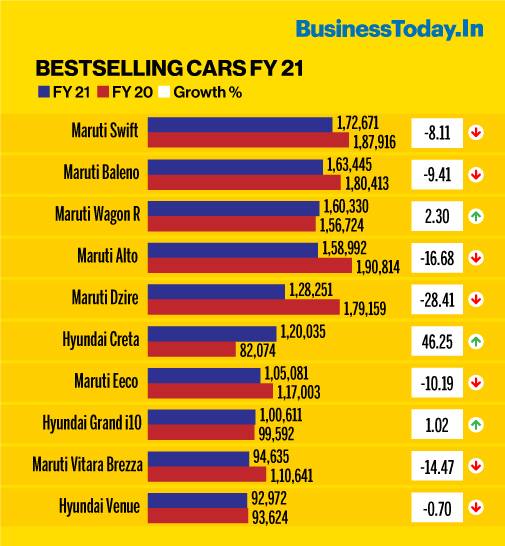 The car that suffered the steepest drop was Swift's compact sedan version Dzire, which is reeling from the impact of not having a diesel version. Maruti decided to stop selling diesel cars after stricter BS VI emission norms kicked in from April last year. At one time, Dzire was close to outselling Alto itself, and is now fifth in the list at 128,251 units, a drop of over 28 per cent over 2019-20. Dzire had suffered a similar 29.4 per cent decline in sales in 2019-20 as well.

The biggest gainer in the list was Hyundai's Creta SUV, which had received a full lifecycle facelift just before the country went into the lockdown in March 2020. The demand for it was so strong that it recorded a 46.25 per cent jump in sales at 120,035 units making its entry into the top 10 list for the first time ever at number 6. Creta is not only the best-selling Hyundai in the market, easily outselling smaller and more affordable cars from its stable -- Grand i10 and Venue. It is also the overall best-selling SUV in the country. Its entry into the list was however at the expense of another Hyundai -- the i20, which has dropped out of the list for the first time in a decade.