No hopes of Auto revival! June sales dip over 40%

Last week, wholesale figures released by industry body Society of Indian Automobile Manufacturers (SIAM) shows that the number of vehicles produced and shipped from the factories to dealerships across the country,had also shown a similar 41 per cent decline for the month

Retail sale of automobiles in June, which represents the number of vehicles actually sold by dealers to customers, registered a 42 per cent decline over last year blunting hopes of a quick revival in a sector that accounts for nearly half of country's manufacturing output.

Last week, wholesale figures released by industry body Society of Indian Automobile Manufacturers (SIAM) shows that the number of vehicles produced and shipped from the factories to dealerships across the country, had also shown a similar 41 per cent decline for the month. 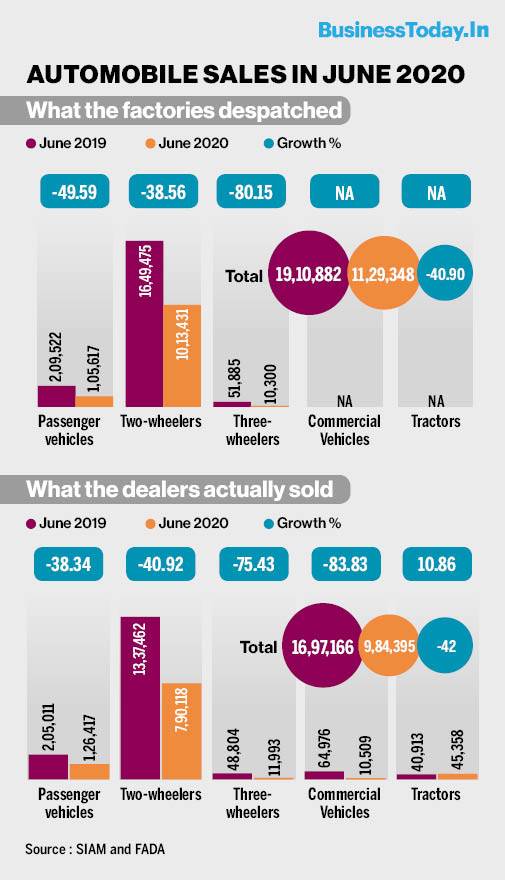 The retail sales showed a 38.3 per cent lower offtake of passenger vehicles during the month that mirrored the trend that was seen in whole sale figures. In two-wheelers too, the percentage drop in sales was nearly similar-40.92 per cent in retail and 38.56 per cent in wholesale. The worst impacted was the commercial vehicle segment which posted a 83.8 per cent decline in sales.

In outright numbers though, the passenger vehicle segment presented a more optimistic picture as retail sales were significantly higher than wholesale numbers (see table) which meant an inventory correction was underway. In two-wheelers, however, retail numbers were much more subdued than wholesale figures suggesting that an inventory build up at the dealerships maybe happening and the actual demand from customers maybe far more subdued. Major two-wheeler manufacturers including Hero MotoCorp, TVS and Royal Enfield have in the recent past said that revival has been better than expected and were keen to ramp up production at the factories.

"Unlock 1.0 coupled with increase in demand from the rural market has boosted the retail sales with respect to the May month's numbers. At the end of June, Almost 100 per cent dealership outlets (showroom and workshops) were operational across the country, barring a few cities and towns which have once again implemented stringent Lockdown. June registrations, although better than May is still not Indicative of the actual demand situation as Lockdown woes continue in some parts and supply side is far from its complete potential," said Ashish Harsharaj Kale, president, Federation of Automobile Dealers Associations (FADA).

"Overall weak economic sentiments coupled with rising number of Covid-19 patients has led to weak consumer confidence especially in Tier - 1 cities, as customers stopover from concluding their purchase as fear of community spread and therefore a return of complete lockdown persists," he added.

Experts have for long questioned the authenticity of wholesale numbers as to gauge the actual consumer sentiment in the market. As the country is gradually coming out of the complete lockdown of April and May, they have cautioned that sustainable growth will take time.

"The wholesale numbers are encouraging to the extent that it shows to what level manufacturers are able to produce and ship automobiles from their factories. But it should be tempered with retail sales data as that is a much better barometer of demand in the market," said Vinay Piparsania, consulting director automotive, Counterpoint Research.

After an 18 per cent decline in sales in fiscal 2020, the automobile industry is set for another steep 26-45 per cent drop in sales this year. It would push the industry back by more than a decade and the chorus for a scrappage policy along with a 10 per cent reduction in GST has grown.

"Overall auto demand continues to be a challenge coupled with supply side constraints as well constraints in Retail Lending from NBFC's, normalcy in demand still seems quite distant and not before the festive season," Kale said.

"Despite the positive trends in the rural markets, the annual outlook currently continues to be grim. We once again urge the Government for urgent introduction of attractive incentive based vehicle scrappage policy which today is one of the dire needs for revival especially in the commercial vehicle segment."