Two other cars -- Hyundai Grand i10 Nios and Kia Seltos were also tested and though they fared better than the S-Presso, none of them managed to get a very high rating

In a major embarrassment for its credentials as a manufacturer of safe cars, India's largest car maker Maruti Suzuki's newest entry level hatchback S-Presso has scored zero star for adult occupant safety in the latest round of crash tests conducted by UK-based independent body Global NCAP.

Launched in October last year, S-Presso joins the hall of shame with 19 other cars in India including stablemates Alto, WagonR, Eeco, Swift and Celerio. In view of rising fatalities on the road -- more people die due to road accidents in India than anywhere else in the world, more stringent safety norms were introduced last year which made it incumbent on manufacturers to fit at least one airbag in the car as a standard feature.

The base variant of the S-Presso that was tested also had a single driver side airbag but still could not manage to get even a single star rating. Global NCAP in fact said that though the zero rating was for potential fatal injuries to the neck in the event of a collision, chest loadings for both passengers at the front were also very high indicating that it could have received the lowest score for that alone as well.

"The high readings in the passenger neck explain the zero star result. However, chest loadings in both front passengers were high and in more updated protocols could also lead to a red chest and a zero stars for this reason as well. Its structure was rated as unstable and should be improved," read the detailed report on the car. "Its footwell area was rated as unstable as well. Child occupant protection showed poor results for both child dummies in the dynamic test explained by the poor performance of the restraint systems. The car does not offer 3 point belts in all positions as standard and has no ISOFIX anchorages for the Child Restraint Systems (CRS)."

Two other cars -- Hyundai Grand i10 Nios and Kia Seltos were also tested and though they fared better than the S-Presso, none of them managed to get a very high rating. Both were fitted with dual airbags as a standard feature and the Nios scored two stars each for adult and child occupant safety while the Seltos scored three stars for adult and two for child safety.

Like in the case of S-Presso, the structure of both cars was found to be unstable. It is in stark contrast to the improvements made by homegrown car majors Tata Motors and Mahindra and Mahindra who are the only companies to have scored the maximum five-star rating in their latest cars.

"Safety is a critical issue and is therefore closely regulated by governments around the world as they are responsible for the safety of the people in their countries. It cannot be left to the opinion of any self-proclaimed party," said a Maruti Suzuki spokesperson. "The government of India has recently increased the stringency of car crash test standards and made them identical to European standards. All products of the company are fully compliant with these global standards and duly tested and certified by the government of India," the spokesperson added.

Business Today reached out to the other two companies - Hyundai Motor India and Kia Motors - for a reaction to the crash test results but none of them have responded yet. The story will be updated if and when they decide to respond.

"It is very disappointing that Maruti Suzuki, the manufacturer with the largest share of the Indian market, offers such low safety performance for Indian consumers. Domestic manufacturers like Mahindra and Tata have demonstrated high levels of safety and protection for their customers, both achieving five star performance," said Alejandro Furas, Secretary General of Global NCAP. "Surely it's time for Maruti Suzuki to demonstrate this commitment to safety for its customers?"

Currently Global NCAP only tests frontal crash protection for occupants and not side impact and pedestrian protection. These would be part of the future evolution of its test protocols in India, which may mean even poorer ratings for some of the cars on the road if they do not change over time.

"We have seen important progress on car safety in India, with new legislation introduced by the government and manufacturers like Mahindra and Tata accepting the Global NCAP five-star challenge and producing models which go well beyond minimum regulatory requirements," said David Ward, President of the Towards Zero Foundation.

"There is no place for zero rated cars in the Indian market. It remains a great disappointment that an important manufacturer like Maruti Suzuki does not recognise this." Global NCAP first grabbed headlines in India on the eve of the biennial Delhi motor show in January 2014 when it tested five Indian cars. All of them - Tata Nano, Maruti Alto 800, Hyundai i10, Ford Figo and Volkswagen Polo - fared miserably and scored a zero. Since then, it has given heart burn to Indian car companies on numerous occasions.

So far 41 cars across 28 brands have been crash-tested in India. The overall results are far from flattering. An overwhelming 20 cars have scored zero star, two have scored one star, four cars scored two stars, five cars have three stars and seven have scored four stars. The Tata Nexon compact SUV, the Altroz premium hatchback that was launched in India earlier this year and the Mahindra XUV3OO are the only three cars to have scored the maximum five stars till date in India. 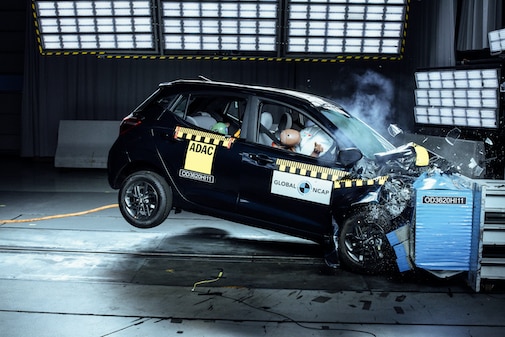 The Grand i10 Nios achieved two stars for adult occupant protection and two stars for child occupant protection. The Grand i10 Nios offers double frontal airbags and pretensioners for both front passengers as standard. Its structure was rated as unstable. Its footwell area was rated as unstable. Head and neck protection for adult occupants was good. Chest protection was weak for the driver and adequate for the passenger leading to limitation of the Seat belt reminder (SBR) points having standard SBR for front passengers. Child occupant protection showed poor results mainly explained by the decision of the car manufacturer not to recommend the CRSs for the test.

Global NCAP is of the opinion that car manufacturers are responsible for all the occupants and child occupants are frequent passengers. Refusing to recommend a CRS for the test raises questions about the car manufacturer policy and relevance towards child occupant protection for the Indian market. The three-year old dummy showed poor protection for the head due to excessive forward excursion of the head during the crash and a limited chest protection. The 18-month-old showed better protection. The car does not offer standard three-point belts in all seating positions and does not offer standard ISOFIX anchorages. 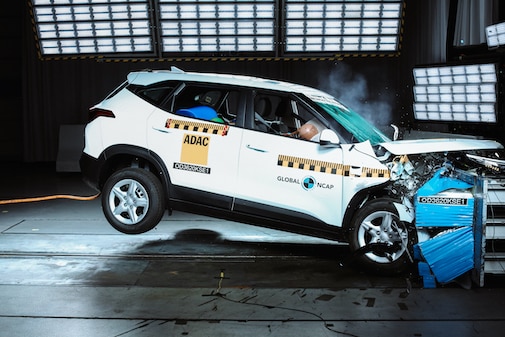 The Seltos achieved three stars for adult occupant protection and two stars for child occupant protection. The Seltos offers double frontal airbag and pretensioners as standard. Its structure was rated as a borderline case unstable. Its footwell area was rated as unstable. Head protection was adequate for both front passengers as both airbags bottomed out during the crash test. Neck protection for adult occupants was good. Chest protection was good for passenger and marginal for driver. The car offers SBR for the front seating positions.

Child occupant protection showed poor results mainly because the manufacturers refused to recommend CRS for the test, and this decision brings the dynamic score to zero. The dynamic performance was poor as the head of the three-year old showed contact during the rebound face after the impact. The car showed limited protection for the three-year old head and neck while the 18-month-old received acceptable protection. The car does not offer standard three-point belts in all seating positions and has no ISOFIX anchorages standard.