News
Auto
Slowdown Blues: Kiss of death for Indian auto industry as sales fall up to 40% in July

Maruti Suzuki India Ltd posted a steep 36 percent decline in sales in July at 98,210 units, selling less than 1 lakh units in a month for the first time since June 2017

Like the sales, the morale within the industry is at record lows.
Sumant Banerji

The labyrinth that the domestic automobile industry has been stuck in for the last 12 months is fast becoming more and more tricky to manage. Passenger vehicle sales slid again in July--for the ninth consecutive month now and with increasing ferocity in recent months. Last month, sales crashed by nearly 30 per cent as consumers continued to stay away from dealerships.

India's largest car maker Maruti Suzuki India Ltd posted a steep 36 per cent decline in sales in July at 98,210 units as compared to 154,510 units in the same month last year. This was the first time since June 2017 when Maruti has sold less than 1 lakh units in a month. That time, dispatches to dealerships were predictably low on account of roll out of Goods and Services Tax in July 2017. The percentage decline itself is so huge that Maruti was hard pressed to answer when was the last time sales had declined by a bigger quantum in a month. 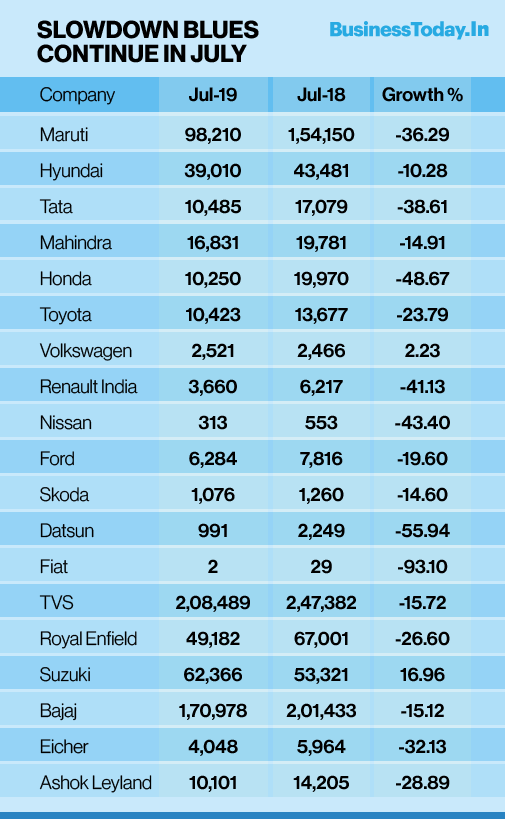 Others performed no better, including companies like Hyundai Motor India and Mahindra and Mahindra that have multiple new launches in the last 12 months for cushion. Hyundai had brought back the Santro in a new avatar in October last year and followed it up with its maiden compact SUV Venue in May this year. Still, it registered a 10 per cent decline in sales last month. Similarly, Mahindra, which has launched the Marazzo MPV, Alturas premium SUV and XUV3OO compact SUV, also posted a 15 per cent dip in sales.

"The headwinds faced by the automotive industry continue as a result of subdued consumer sentiment, triggered by various factors. The industry needs stimuli to help revive consumer demand and conversions," said Veejay Ram Nakra, Chief of Sales and Marketing, Automotive Division, M&M Ltd. "We hope that the overall buying sentiment will improve in the run-up to the festive season and with the monsoon turning out to be better than initially anticipated."

Those without the luxury of new products fared worse. Honda Cars saw its sales slide by nearly 49 percent while counterpart Toyota also witnessed a 24 percent dip.

"The degrowth in the automobile industry further intensified last month amidst weak buying sentiment and overall slowdown. We are also witnessing lot of postponement of purchases," said Rajesh Goel, Senior Vice President and Director, Sales and Marketing, Honda Cars India Ltd. "It is extremely worrisome since July 2019 decline is much severe than Q1 decline and that too when the industry had degrown in July last year as well."

"The industry is deeply concerned with the increasing pressure of low customer sentiment faced by the sector. The high insurance costs, rise in taxes and liquidity crunch across the non-banking finance segment, tightening of lending norms have significantly affected the domestic sales in the last few months," added N. Raja, Deputy Managing Director, Toyota Kirloskar Motor. "We are trying to lend maximum support to our dealers through the hard times faced by the industry by maintaining lean inventory. We hope that the upcoming festive season brings in a breather for the industry with spur in customer sentiments. Also, we expect government will step in to take necessary steps for improving liquidity in the market by capital infusion in the banks should also be of some help. The industry also expects the GST level to be rationalized to a lower level (28 per cent to 18 per cent) to accommodate the downturn in sales."