Fintech unicorn BharatPe has strongly hit out at its ex-co-founder and managing director Ashneer Grover after the latter resigned from the company yesterday.

BharatPe has hit out at its ex-co-founder and Managing Director, Ashneer Grover saying that he and his family misused company funds to support lavish lifestyle
Bismah Malik

Fintech unicorn BharatPe has strongly hit out at its ex-co-founder and managing director Ashneer Grover saying that Grover and his family engaged in extensive misappropriation of the company funds to support their lavish lifestyles. The company said that, in order to uphold its highest governance standards and in the light of complaints received, the BharatPe board directed a thorough review of the company’s internal controls. This extensive review is being led by well-respected and independent external advisors, it added.

The company said that it reserves all rights to take further legal action against him and his family.

Without commenting on whether BharatPe accepted Grover’s resignation, the company stated that he is no longer an employee, a founder, or a director of the company.

“The Board will not allow the deplorable conduct of the Grover family to tarnish BharatPe’s reputation or that of its hard-working employees and world-class technology. As a result of his misdeeds, Mr. Grover is no longer an employee, a founder, or a director of the company,”  BharatPe told BT in response to an emailed query. 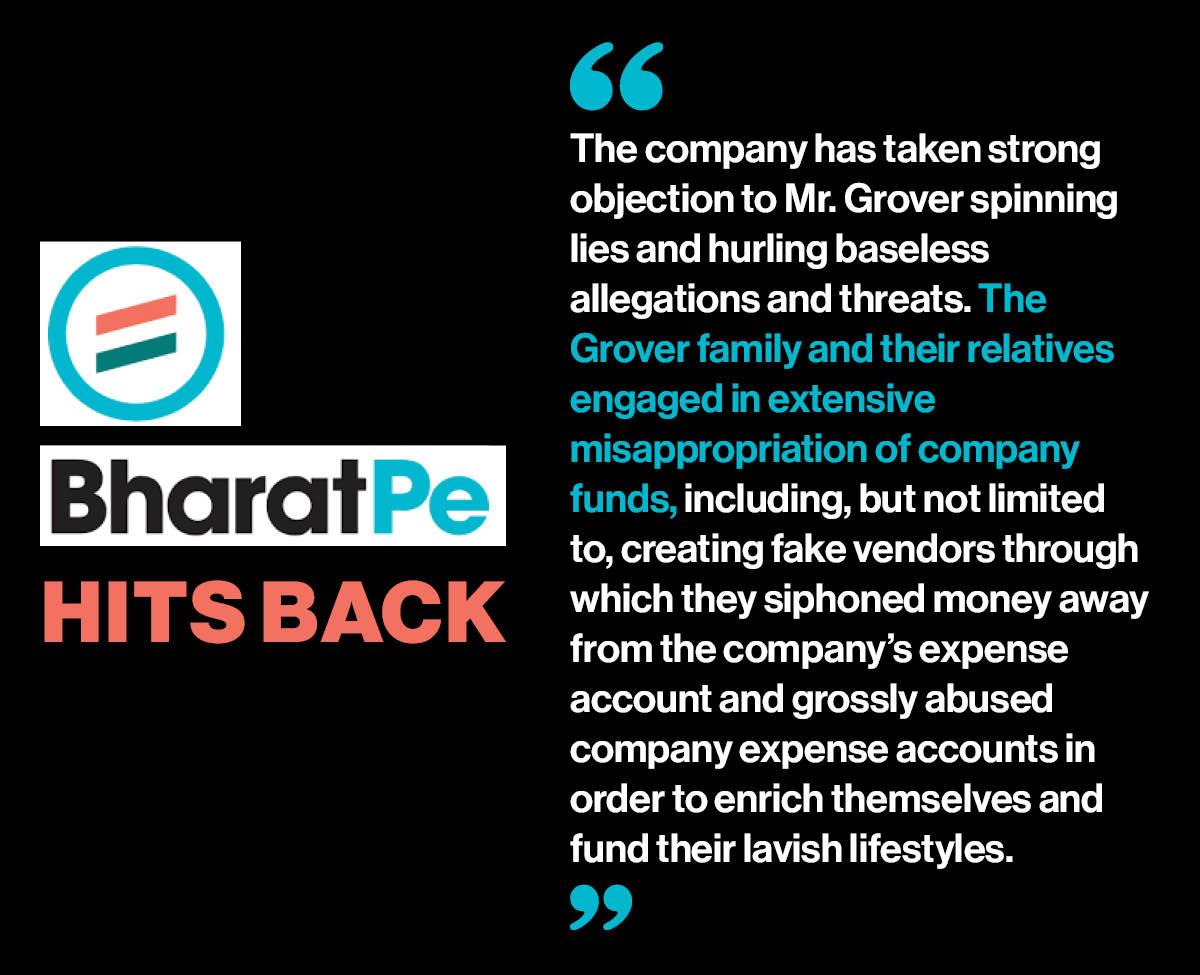 “BharatPe is fully committed to its employees and customers and looks forward to its continued success as a fintech leader in India,” the company spokesperson said.

Grover tendered his resignation during early hours of March 1 to BharatPe board calling the governance review being conducted by the company a sham in which he wasn’t given an opportunity to be heard and charged the company investors, like Sequoia Capital, of fuelling the fire against him.
Grover denied to comment when BT reached out to him for fresh responses to BharatPe’s comments.

“Minutes after Mr. Ashneer Grover received notice that some of the results of the inquiry would be presented to the Board, he quickly shirked responsibility by sending an email to the Board submitting his resignation and fabricating another false narrative of the events to the public. The company has taken strong objection to Mr. Grover spinning lies and hurling baseless allegations and threats. The Grover family and their relatives engaged in extensive misappropriation of company funds, including, but not limited to, creating fake vendors through which they siphoned money away from the company’s expense account and grossly abused company expense accounts in order to enrich themselves and fund their lavish lifestyles,” BharatPe said.

The company has been conducting a governance review and has roped in risk advisory firm Alvarez and Marsal, consulting firm PwC and law firm Shardul Amarchand Mangaldas and Co, to probe into alleged funds misappropriation and corporate governance issues under Grover. Earlier Grover shot a letter to the Bharat Pe board in which he wrote, "I write this with a heavy heart as today I am being forced to bid adieu to a company of which I am a founder. I say with my head held high that today this company stands as a leader in the fintech world. Since the beginning of 2022, unfortunately, I’ve been embroiled in baseless and targeted attacks on me and my family by a few individuals who are ready not only to harm me and my reputation but also harm the reputation of the company, which ostensibly they are trying to protect."

BharatPe, in response, said that its board is taking all necessary steps in order to strengthen the firm's corporate governance, such as by appointing an audit committee, an internal auditor and the implementation of other key internal controls.

“The success of BharatPe is a result of the collective effort of a large team of dedicated and talented professionals, and not any one individual. We are confident that the company is marking the beginning of a new chapter in its success–one grounded in trust and integrity–and we are excited to embark upon this next leg of our journey,” BharatPe said.