The value of this inventory at Rs 9.38 lakh crore is more than the gross state domestic product (GSDP) of most states including Kerala, Haryana, Madhya Pradesh, Andhra Pradesh, and is almost double the GSDP of Bihar 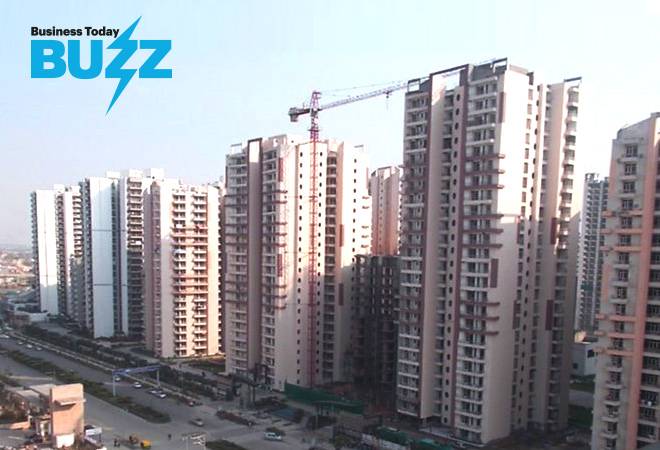 Over 13 lakh houses worth Rs 9.38 lakh crore, or about 5 per cent of India's gross domestic period (GDP), are lying unsold across India as the real estate sector grapples with the worst-ever slowdown in the last many decades.

The value of the unsold inventory is the highest in the Rs 1-2 crore bracket, where 1.28 lakh units valued at Rs 1.8 lakh crore are awaiting buyers, according to data from real estate research and consultancy firm Liases Foras.

This is followed by 2.15 lakh units in the Rs 60 lakh to Rs 1 crore bracket with houses valued at Rs 1.70 lakh crore. The average ticket size of houses in this category is Rs 79 lakh. Unsold inventory includes under construction as well as ready-to-move-in houses.

"This (Rs 9.38 lakh crore) is the potential of saleable houses. But, the sales are just about one-third of what can be actually sold. Efficient markets maintain 12 to 15 months inventory," Pankaj Kapoor, founder and MD of Liases Foras told Business Today. 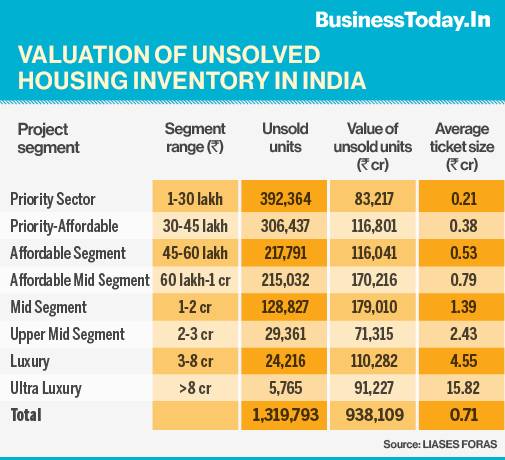 Current pan-India inventory level is 42 months, implying it will take more than three years to liquidate the unsold housing stock in the country. But, at a city level, the inventory overhang is as high as 80 months in Kochi, 59 months in Jaipur, 55 months in Lucknow and 72 months in Chennai. So, it will take between five and seven years for developers in these cities to get rid of the present housing stock.

"The majority of these units are under construction. To sell them, developers need to give a minimum 20 per cent discount. Then the housing market can gallop. And if it does, it will give a huge fillip to the economy," Kapoor adds.

The value of this inventory at Rs 9.38 lakh crore is more than the gross state domestic product (GSDP) of most states including Kerala, Haryana, Madhya Pradesh, Andhra Pradesh, and is almost double the GSDP of Bihar (Rs 5.7 lakh crore for 2019-20).

In terms of units, the maximum unsold houses (3.92 lakhs) are in the priority sector category, priced between Rs 1 lakh and 30 lakh. Their value, due to average ticket size of only Rs 21 lakh, is Rs 83,217 crore. This is followed by priority affordable segment with 3.06 lakh unsold houses with an average price tag of Rs 38 lakh in the Rs 30-45 lakh category.

"Affordable housing sales have tapered off in the last couple of quarters due to crisis in the non-banking finance sector where most shadow bankers have stopped lending to customers," says Kapoor.

While Dewan Housing Finance stopped lending last December after it was unable to rollover credit, IndiaBulls Housing Finance is also facing headwinds following allegations of financial irregularities by promoters. Banks have an exposure of Rs 27,580 crore to IndiaBulls.

Umesh Mehta, Head of Research, Samco Securities says NBFCs had a great time capturing the incremental market share of PSU Banks, which had led to abnormal growth in the space. "But IL&FS saga turned the tide for the sector. The current state of affairs is similar to what the US witnessed during 2009 sub-prime crisis, which took around 18 months to 2 years to subside. In India too, by budget 2020 things will stabilise, given the time the financial sector needs to heal itself," he adds.

Until then, housing sales will continue to be impacted despite the subsidies being given by the government for the affordable housing sector. Under the Pradhan Mantri Awas Yojana (PMAY), households with an annual income of up to Rs 18 lakh can avail Rs 2.3 lakh upfront subsidy for a home. Buyers are also eligible for income tax exemption on housing loans.

Real estate prices too have not gone up over the last three years. The weighted average price per sq ft has been stable at around Rs 6,700 per sq ft since 2016. In fact, in the National Capital Region (NCR), prices have seen a decline over the last two years.

Siva Krishnan, MD - Residential Services, Developer Solutions and Strategic Consulting, JLL India, says the contradiction is that if the price goes up, confidence in projects will begin to return. "The word of mouth customers will come only with price gradation, which is not happening," he says.

Krishnan feels most of stuck projects are those that were launched between 2014 and 2015 and are now delayed. "Some of the projects have gone through a different trajectory, growing at a slow pace. Developers need enough liquidity to complete the project and it is not coming by."

There is an urgent need to revive confidence in the market with new launches. "I believe each city needs to go back to launch cycles of 2014-15 and that will help trigger the market by helping consumer sentiment," Krishnan says.

The biggest killer for the under-construction flats, however, has been the imposition of Goods and Services Tax (GST) in July 2017. The rate, which was then 18 per cent, was not applicable on ready-to-move-in properties and it boosted their demand. As a result, under construction projects were stuck with buyers preferring to buy ready flats to save on GST payment.

Earlier this year, the government slashed the GST to just 1 per cent for affordable houses and 5 per cent for other categories. Yet, it is not sufficient to catapult demand at a time when liquidity is scarce, consumer confidence is low and the economy is facing a slowdown. Moreover, the industry had already lost over 19 months by then.

Kapoor says the imposition of GST on under construction properties has only worsened things for the sector. "Customer advances were a good source of builder finances when booking under construction projects did not attract GST. Now, the builder has to continue paying interest on loans in the absence of sale of incomplete houses. We are a capital-starved country and real estate is severely affected by this," he adds.

"GST should be imposed on ready properties and not on under construction flats," Kapoor suggests.

He makes another case for imposing GST on under-construction properties. "The primary market (buyers purchasing directly from builders) is only 34 per cent of the overall market. If we impose GST on ready properties, the government revenue will only increase as they form a much bigger chunk of the market."

The government, on its part, has been announcing measures in tranches to help the sector complete stuck projects. Finance Minister Nirmala Sitharaman last month announced a Rs 20,000-crore fund to complete stalled projects and also rid the sector of some cash crunch.

However, the funding comes with so many riders that most of projects, especially in the NCR will not stand to gain anything as the last mile funding is for projects that are not non-performing assets and have not been referred to the National Company Law Tribunal. The fund is only for affordable housing projects, excluding houses with a tag of over Rs 45 lakh.

Clearly, unless the government steps in with stronger measures and ensures that the benefit of repo rate cuts is passed on to customers, reviving the ailing real estate sector will not be easy.